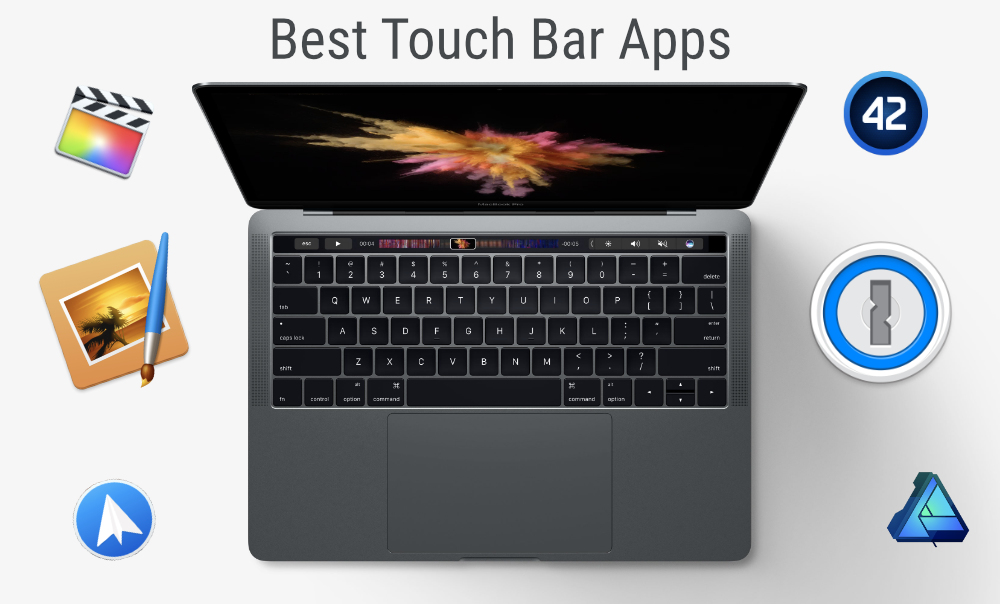 If you just picked up a new 2016 MacBook Pro, you may be wondering: aside from the stock apps, what are other great apps that take advantage of that shiny new Touch Bar? While apps are constantly being updated, we’ve gone ahead and picked out some of our favorites that are currently available. 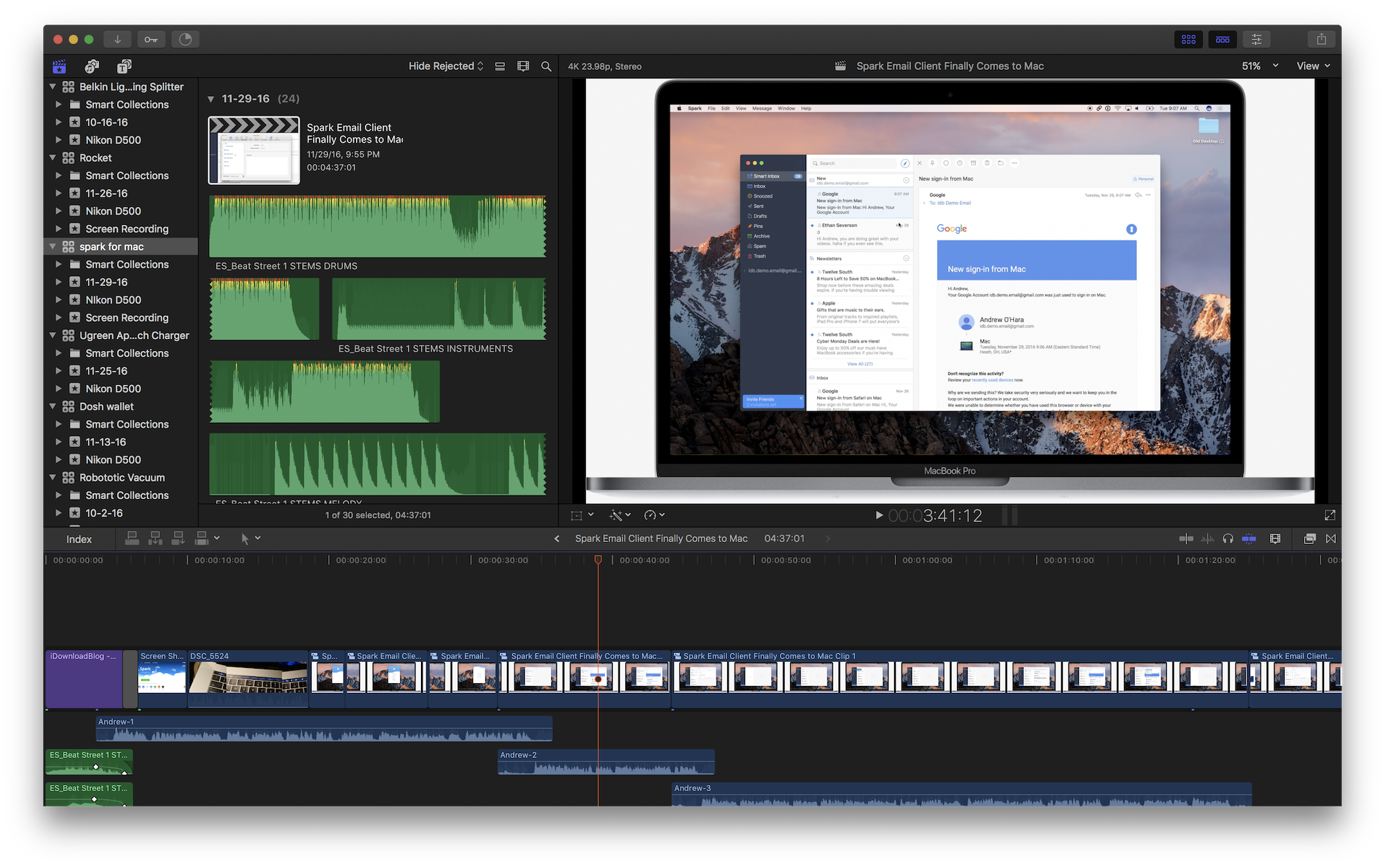 Apple’s pro video app was a welcome sight to see as one that currently supports the Touch Bar. It actually got quite a large update with many new features and layout enhancements. Like many applications, a lot of the functions in the Touch bar are easily duplicated through keystrokes, but I can definitely see it becoming more useful, especially with users who don’t know the traditional shortcuts. Final Cut is available on the App Store for $299. 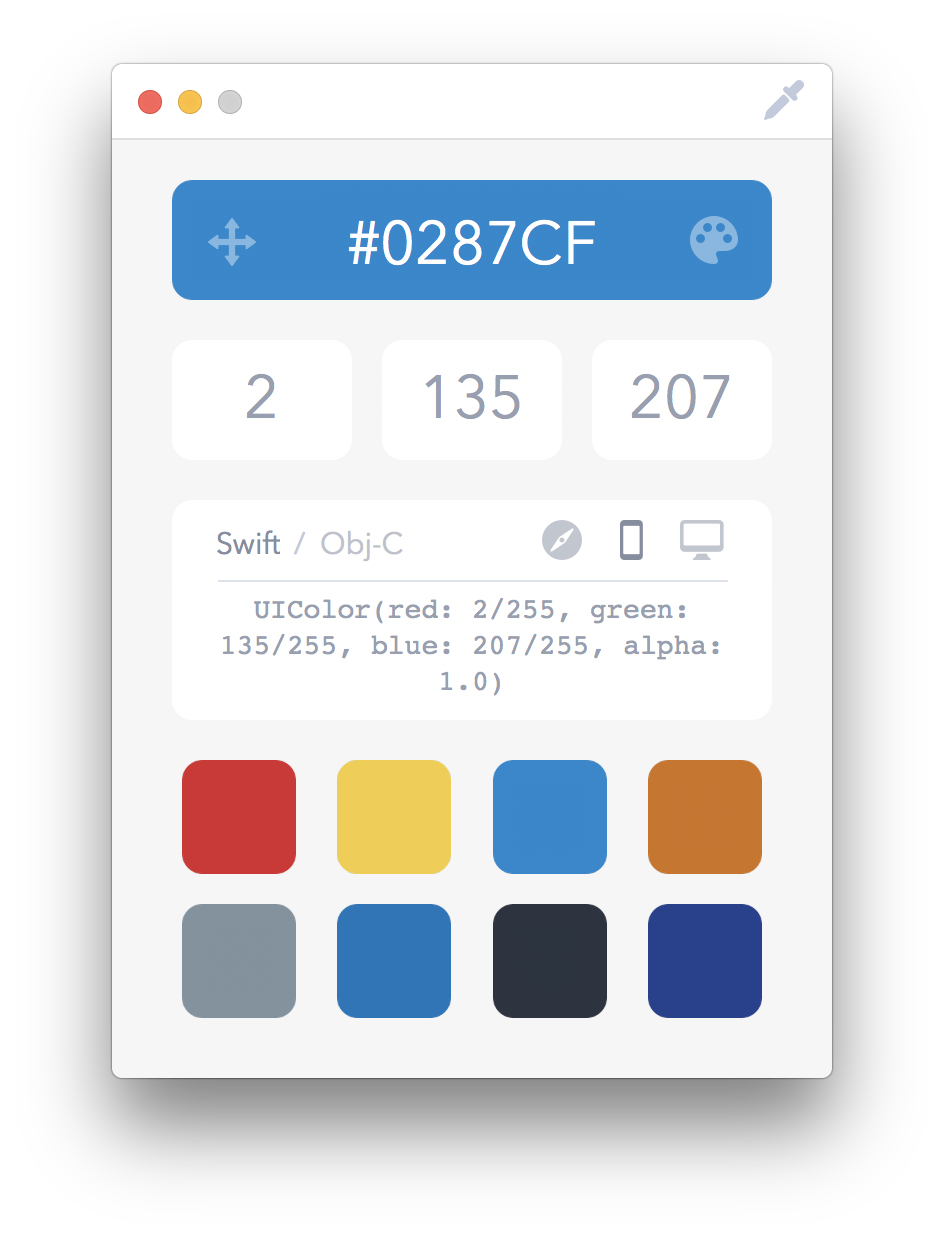 Drop is a new color picking tool that is very useful to designers. It allows you to quickly launch a color picker, and save that color to your clipboard. It also works really well with the Touch Bar, displaying the colors from your saved palette right below the screen. When you tap on any of your saved colors, it immediately will copy it to your clipboard. I found this very useful as I often need to draw from certain colors. Drop is available on the App Store for $3.99. 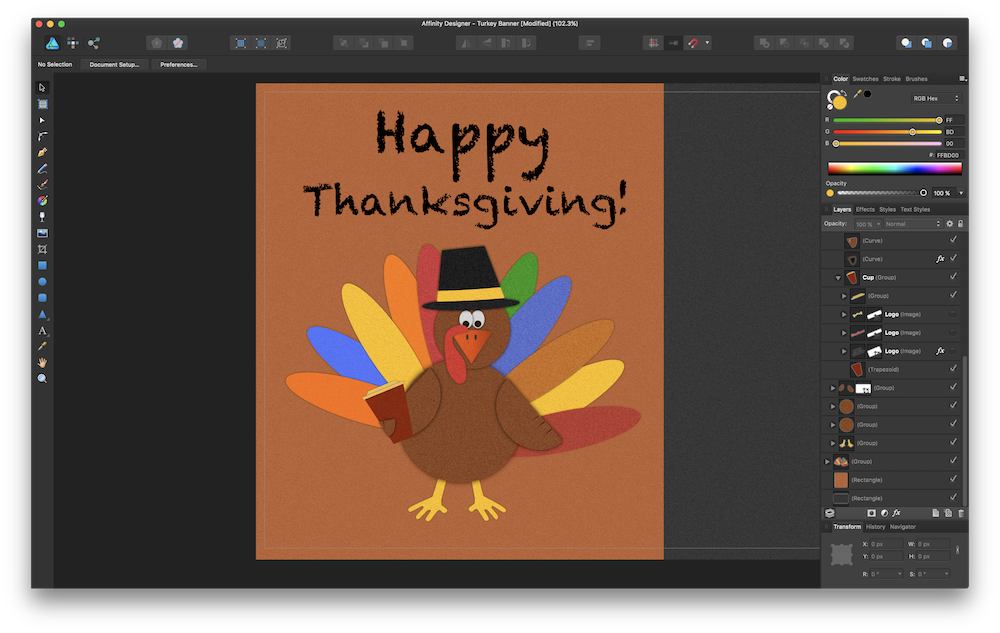 I’m a huge fan of both Affinity Designer, and Affinity Photo. Affinity Designer is of the same ilk as Illustrator and Sketch, allowing you to create vector artwork. Affinity was quick with an update, available right on launch day, to bring a wealth of new features to the Touch Bar. As you switch to different tools in the system, it displays contextually relevant options you may need, right at your finger tips. I think one of the simplest things that I enjoyed, was when I opened the app, I could see visually all my recently opened documents, instead of rooting through a menu. My only downside with Designer, was that you could not go in and customize the Touch Bar yourself. I didn’t find myself wanting to do this too often though, as the suggested tools were usually what I needed. Affinity Designer is available on the App Store for $39.99. 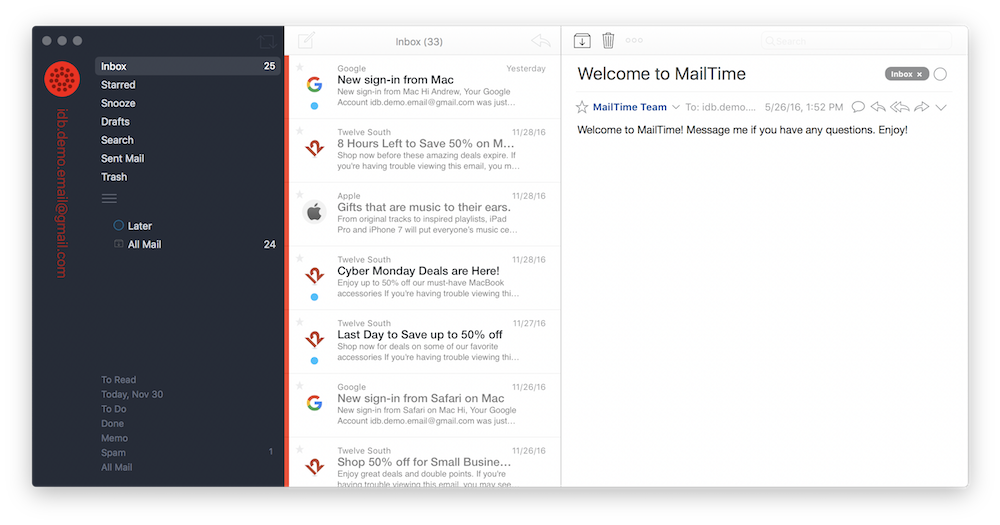 Airmail 3 feels right at home on the Touch Bar. I did find myself preferring to use that, rather than keystrokes. There is a quick archive/delete button to rid yourself of your current email. A list of folders to jump to, an account switcher, new email button, refresh button, and (my favorite) a filters button. It seemed very much second nature and easy to use and one of the apps that I most adjusted to using. Airmail 3 is available on the App Store for $9.99. 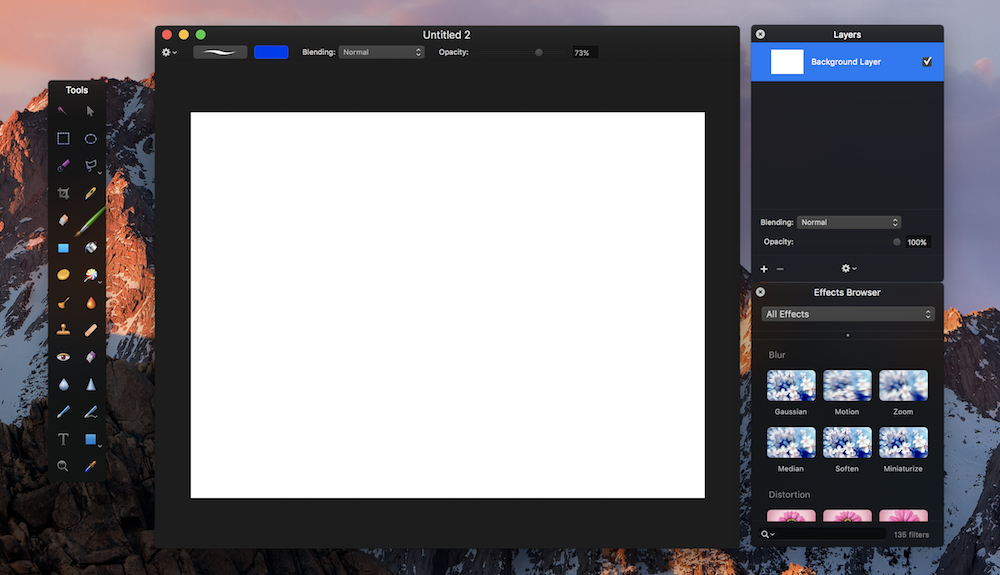 Pixelmator is another great graphics program. It even has an iOS counterpart with two-way iCloud syncing. While still being contextually aware of where you were in the app, it was also fantastic at letting you completely customize the Touch Bar to your liking. There is a huge list of all the different tools and commands you may want to use. Not only that, but it made it easy to switch tools. I could see myself working full screen in Pixelmator, and using the Touch Bar to switch tools and hiding the tool list on my screen. Pixelmator is available on the App Store for $14.99. 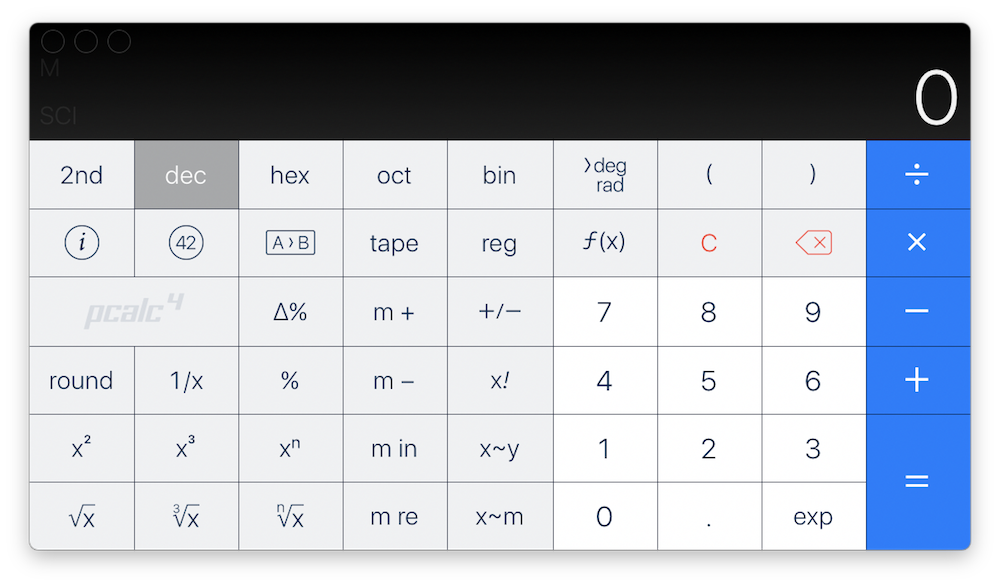 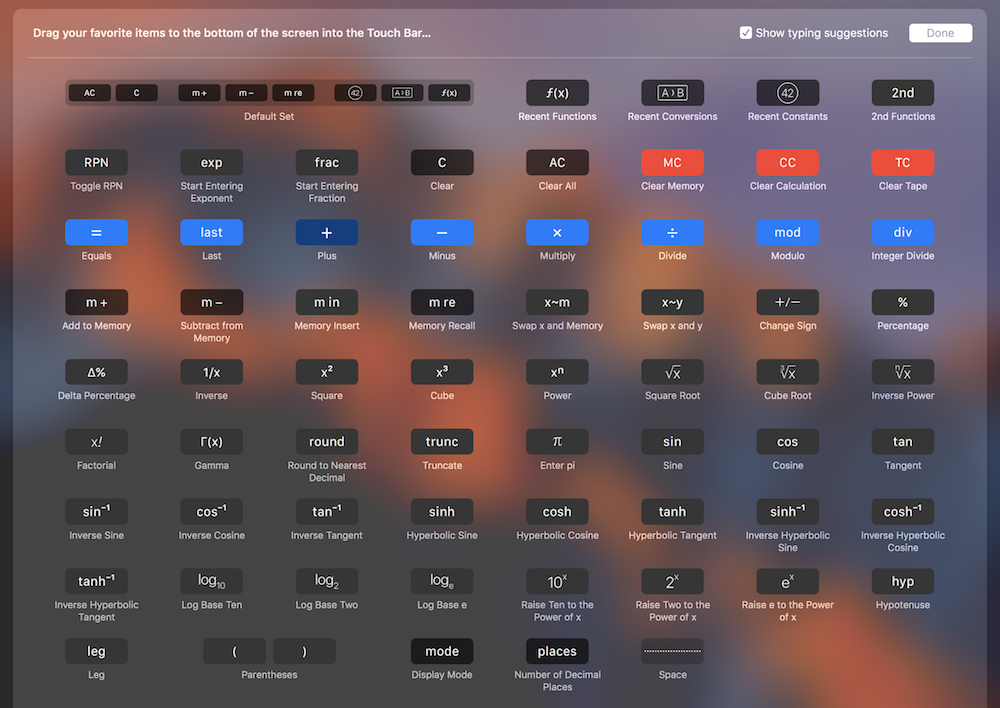 If you do a lot of math on your Mac, you’ve probably seen PCalc. It is another simple application with tons of features. Putting functions onto the Touch Bar also seemed very natural here. It kept the app itself very clean and simple, but allowing advanced controls below. Many people do different types of math, and need different things, from functions, to exponents, to rounding. I particularly liked being able to add and recall different numbers from memory. Even better, it has a ton of options to choose from in putting the functions you use most often, right up front. PCalc is available on the Mac App Store for $9.99. 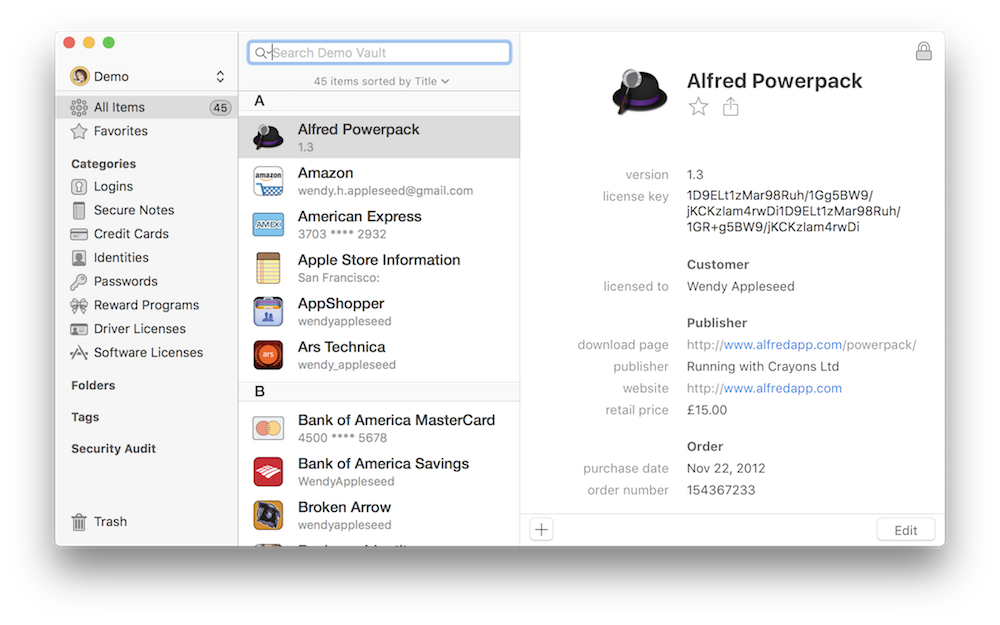 This is the only application on the list that utilizes not only the screen on the Touch Bar, but the Touch ID sensor as well. No longer do you need to use your long master password every time you want access to your passwords. You simply open the app, or the mini Menu Bar utility, tap the quick 2nd gen Touch ID sensor with your enrolled finger, and you are in. Just as if you are logging into the Mac itself. It still uses the screen to switch vaults, create new items, and jump to search, but I think the best feature is hands down Touch ID. 1Password is available on the Mac App Store for $64.99. 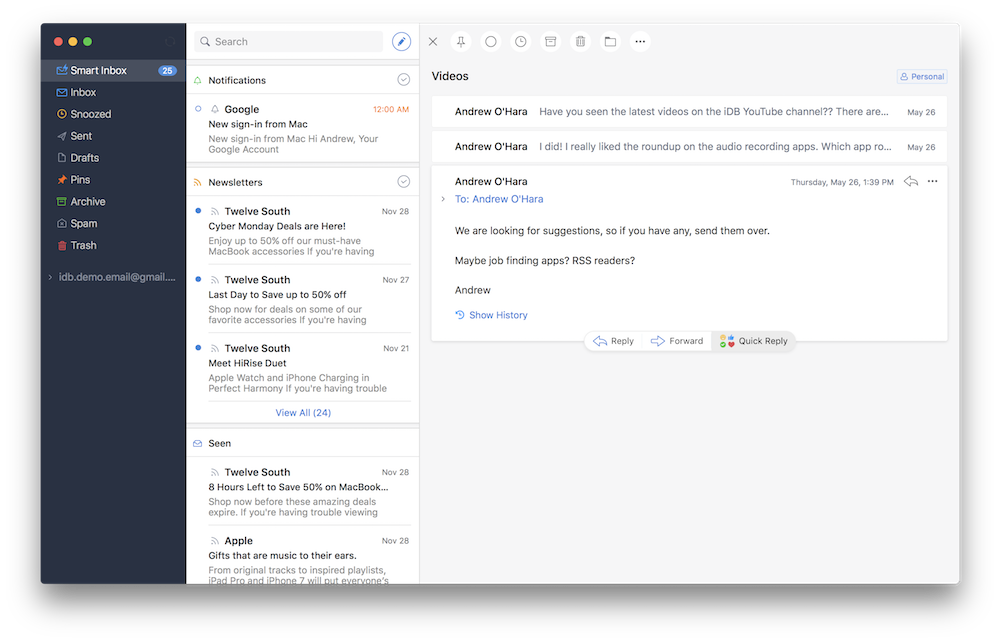 Spark has been available on iOS for some time now, with both an iPad and an iPhone application. It has been very well received, and just recently launched on the Mac. Aside from some great email features like Smart Inbox, Smart Notifications, snoozes, and quick replies, it also launched with Touch Bar support. Just like with Airmail, the touch screen feels right at home inside an email application. It brings a lot of useful features right to your finger tips. I particularly like the filters, and moving folders. Both of those would normally take a few mouse clicks to accomplish. Available for free on the App Store.

Fantastical
One of, if not the best, third party calendar apps out there. Fantastical was updated to make creating events and navigating the app even quicker and easier. Available on the Mac App Store for $39.99.

Chronicle
Chronicle is a bill tracking app that makes it easy to see what expenses you have upcoming. Available on the Mac App Store for $4.99.

Djay Pro
This is geared, obviously, towards those who mix music on their Macs. The Touch Bar was demoed as part of Apple’s late 2016 keynote to introduce the new MacBook Pro. Available on the Mac App Store for $49.99.

Mail Designer Pro
Mail Designer Pro was just updated to version 3, and includes Touch Bar support. This is a great application for those who send out newsletters, and you can even export the templates to mailing services like MailChimp. Available on the Mac App Store for $49.99.

Day 1
If you are one who likes to journal, you may already be familiar with Day 1, which is a clean and simple journaling application. Available on the Mac App Store for $39.99.

It has taken me a bit of time, but I’m starting to come around on the Touch Bar. The hurdle seems to be that it is much better to use than just to see. I was much more impressed with the Touch Bar in person and in day to day use, than just in Apple’s promo videos.

Do you think the Touch Bar shows real promise? Or just another gimmick to differentiate the Mac? If you’ve used the Touch Bar, let us know what you think down in the comments.