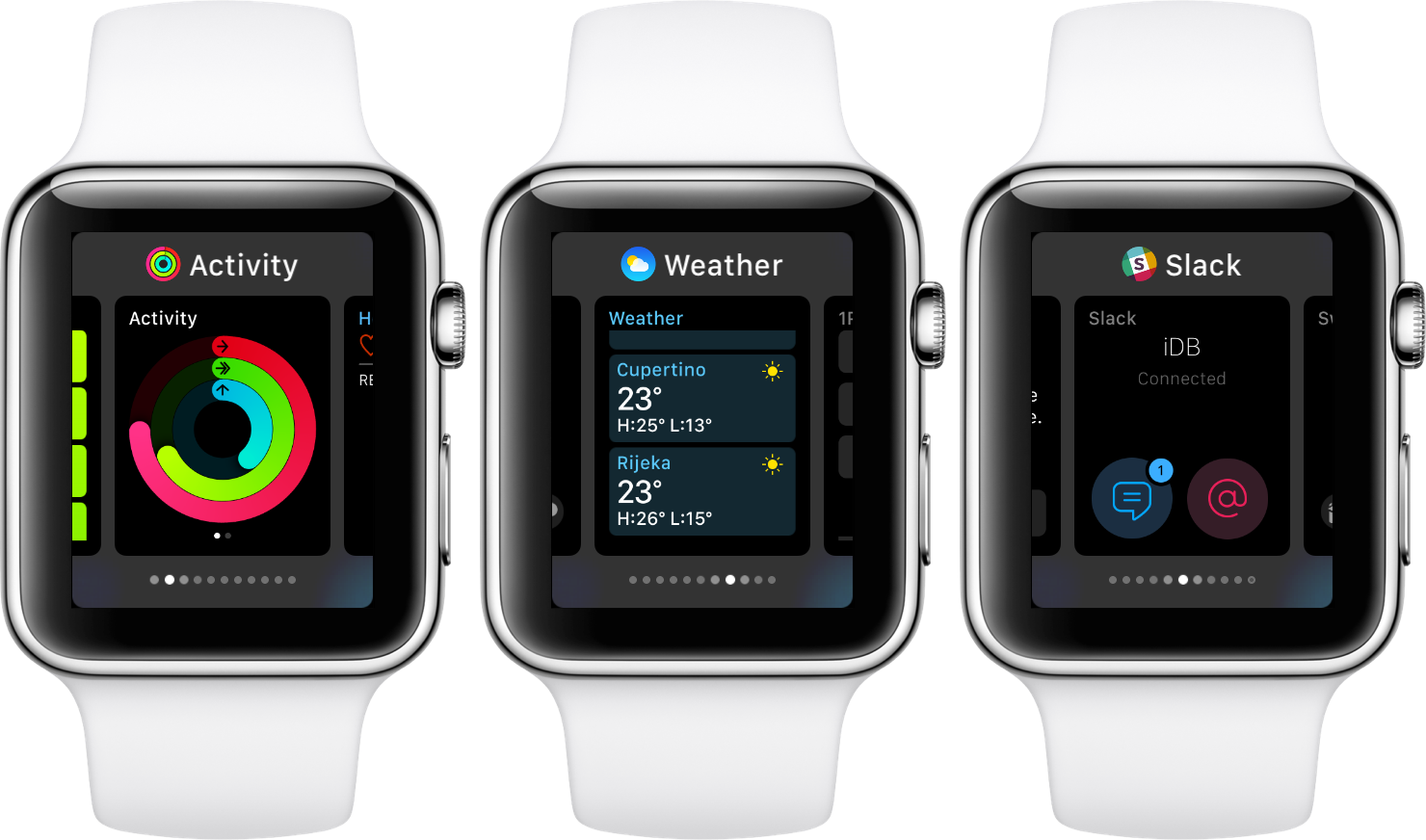 The Dock is one of the biggest changes that came with watchOS 3, and it provides quick access to up to 10 of your favorite Apple Watch apps from anywhere in the operating system.

The Dock, can be launched from anywhere by simply pressing the side button of your Apple Watch, so this is something you will want to familiarize yourself with it.

How the Dock works on Apple Watch

The Dock is fully customizable, so you can choose the apps you want to display here. These apps are going to be backgrounded, unlike the other apps on your Apple Watch, which means they can refresh their data even when you’re not using the app front and center on your screen.

You can move right and left between your docked apps by swiping in the direction you want to go or by turning the digital crown. As you do, you will see small previews of the app that resemble the Glances feature from watchOS 2, but don’t be fooled, as these aren’t the same as the Glances feature you may have been used to. These app previews are going to update in real time as the apps work in the background.

Another thing to note is that because these apps run in the background, they’re going to launch much faster than your typical app from the Apple Watch’s Home screen will when you tap on them.

Set up your Apple Watch’s Dock from your iPhone

To set up the Dock on your Apple Watch, open the Apple Watch app on your iPhone and open to the Dock cell. From there, you can tap on the orange Edit button at the top right of the app. 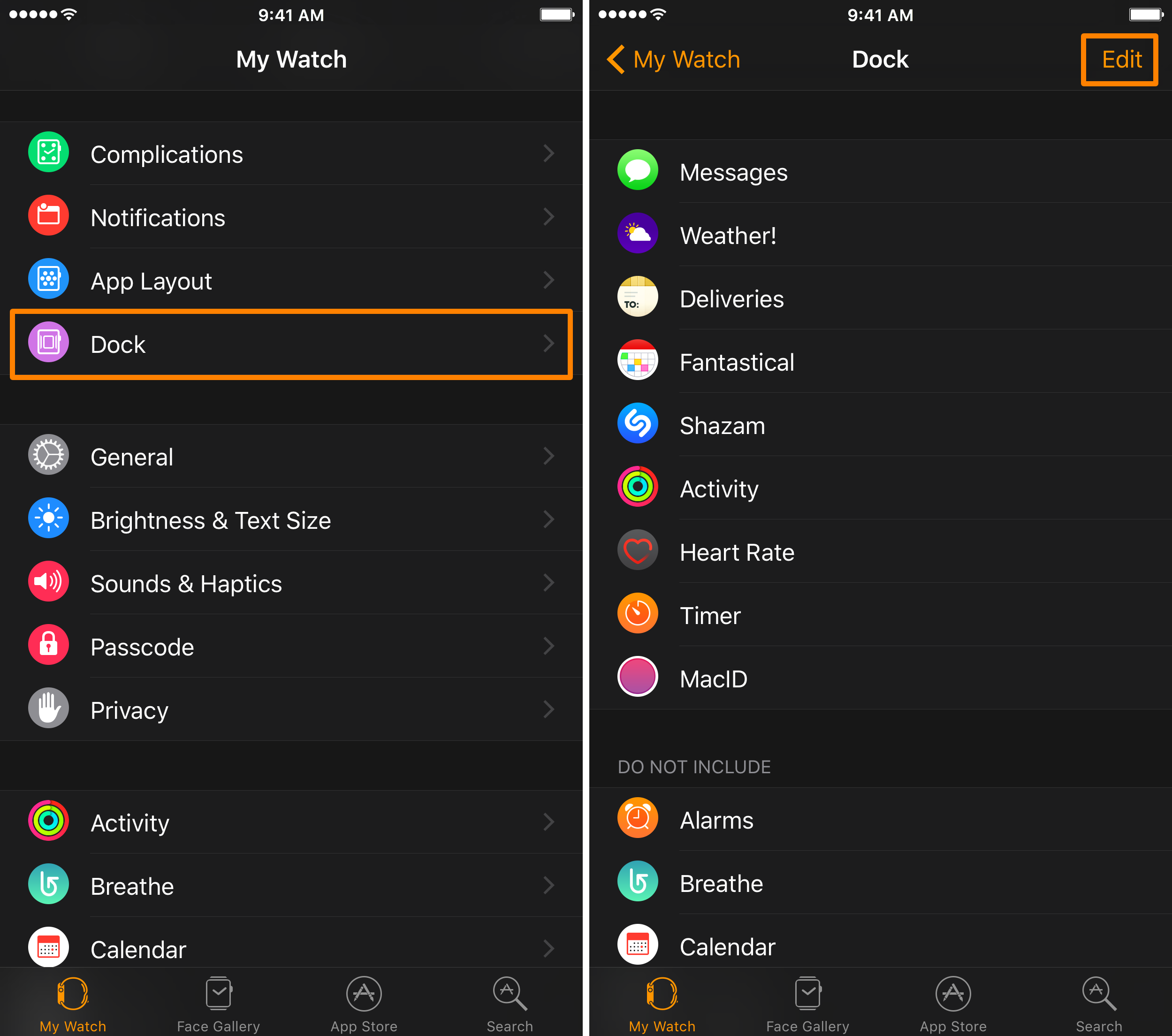 Now you’re in editing mode and can freely add or remove apps from your Apple Watch’s Dock. To add an app, tap on the green + button to the left of its name, and it will be added to the Dock: 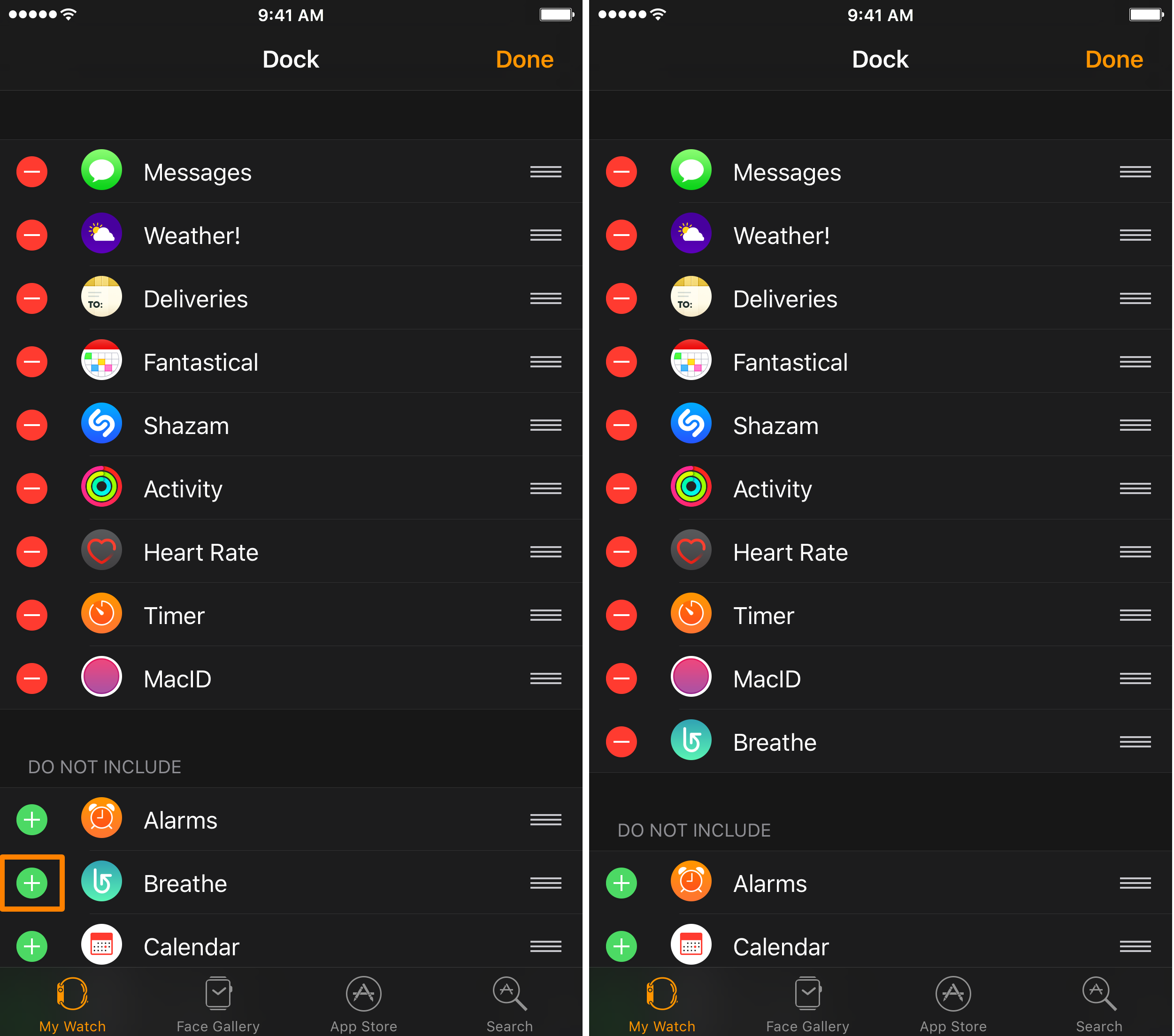 If you want to remove an app from the dock, then you’ll tap on the red – button to the left of the name instead, and this will reveal a red Remove button you can tap to get rid of it. 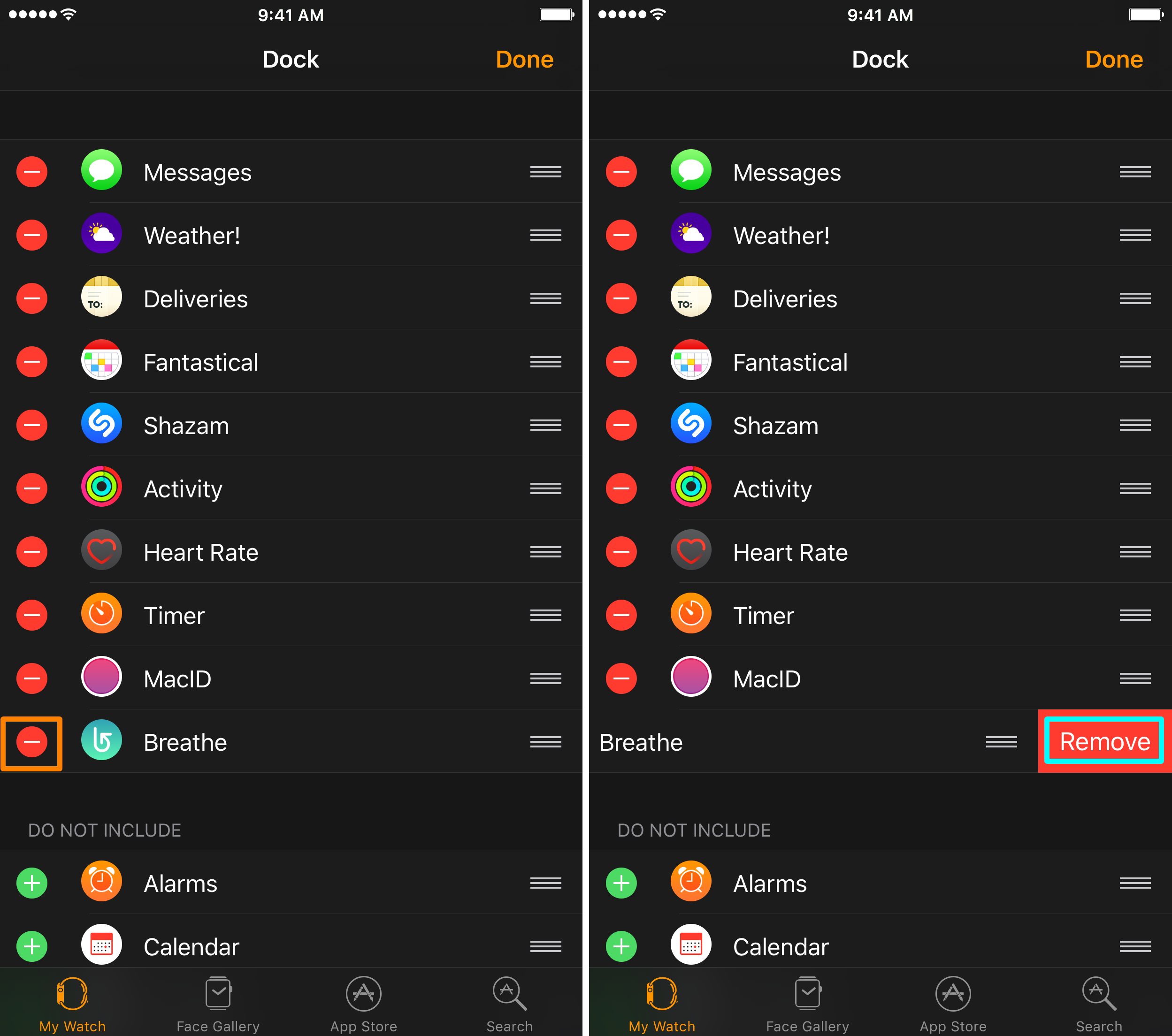 You will also notice that to the right of all the app names are small grabbers. If you tap and drag on these grabbers, you can easily modify the order your docked apps appear in. You should put your favorite apps first for ease of access.

Set up your Apple Watch Dock from the watch itself

If you’re not in the mood to drag your big iPhone our of your pocket to do this, then fortunately you’re in luck, because Apple lets you customize your Dock from the Apple Watch itself too.

To add an application to your Dock, you need to go to your Apple Watch’s Home screen and find an app you want to add, then launch it. We’ll be using the Slack app for this example:

Once the app we picked is launched and fully loaded, we can press the side button on our Apple Watch and the Dock will open. You are going to see a Keep in Dock button after about a second, and if you tap on it, the app will be added to your Dock.

On the other hand, if you want to do the opposite and remove an app from your dock, all you have to do is swipe up on it from the Dock:

When you do, you’ll see a prompt to remove the app, and all you will need to do is tap on the Remove button and this will get rid of it.

To change the position of an app in your Dock from your Apple Watch, all you have to do is tap and hold on one of the app previews from the Dock, and an editing interface will pop up: 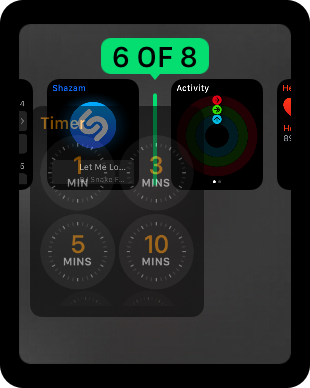 Simply drag the app to the position you want it in, and then release your finger and it will be placed. A green “X of X” indicator pops up to let you know what position in the list you’re about to drop the app in.

That pretty much concludes what you need to know about using the Dock on the Apple Watch, and as you’ve seen, this feature makes it super easy to access your favorite apps quickly and have them updating information in the background for a real time look at what’s going on inside of them.

What apps do you keep in your Apple Watch’s Dock? Share in the comments below.