Windows giant Microsoft on Monday announced it’s purchasing business-oriented social networking service LinkedIn for a cool $26.2 billion. Microsoft CEO Satya Nadella said in a message to troops that he’s been learning about LinkedIn for some time “while also reflecting on how networks can truly differentiate cloud services.” LinkedIn has a network of more than 433 million business professionals, meaning Microsoft would be paying an average of about $60 per user.

Microsoft will acquire LinkedIn for $196 per share in an all-cash transaction valued at $26.2 billion, inclusive of LinkedIn’s net cash. “LinkedIn will retain its distinct brand, culture and independence,” said Microsoft. 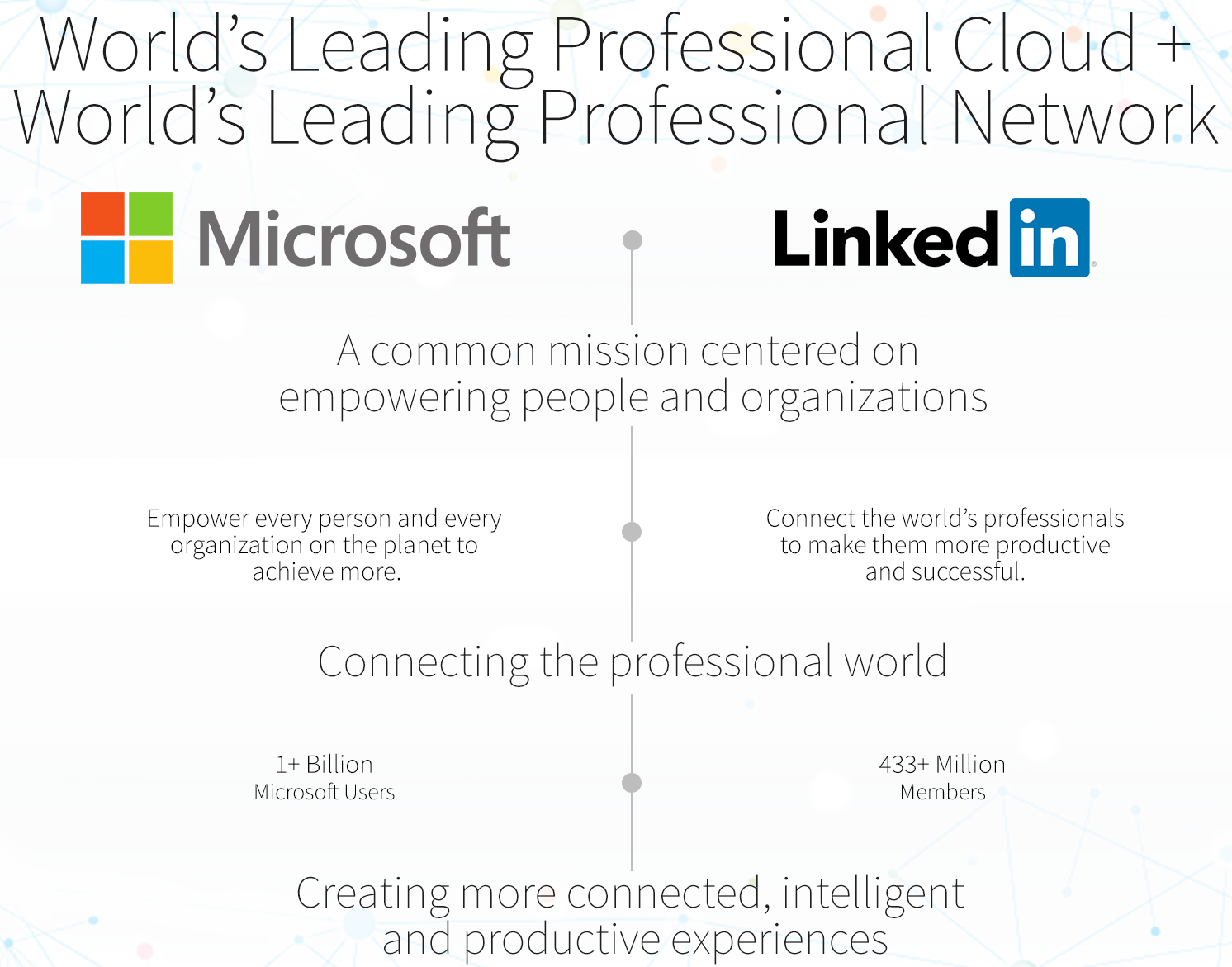 Jeff Weiner will remain CEO of LinkedIn, reporting to Microsoft’s boss Satya Nadella. The transaction has been unanimously approved by the Boards of Directors of both LinkedIn and Microsoft and is expected to close this calendar year.

LinkedIn’s financials will be reported as part of Microsoft’s Productivity and Business Processes segment. Microsoft’s Satya Nadella and LinkedIn’s Jeff Weiner discussed the acquisition of LinkedIn in a video embedded below.

Nadella said the Office 365 + Dynamics + LinkedIn combo will make it possible for new experiences such as a LinkedIn newsfeed that serves up articles based on the project you are working on and Office suggesting an expert to connect with via LinkedIn to help with a task you’re trying to complete.

From Nadella’s memo to troops:

A big part of this deal is accelerating LinkedIn’s growth. To that end, LinkedIn will retain its distinct brand and independence, as well as their culture which is very much aligned with ours. Jeff will continue to be CEO of LinkedIn, he’ll report to me and join our senior leadership team.

In essence, what I’ve asked Jeff to do is manage LinkedIn with key performance metrics that accrue to our overall success. He’ll decide from there what makes sense to integrate and what does not. We know that near term there will be no changes in who reports to whom so no reporting relationships at Microsoft will change in that regard.

This approach is designed to keep the LinkedIn team focused on driving results while simultaneously partnering on product integration plans with the Office 365 and Dynamics teams. During the integration, we’ll pick key projects where we can go deep together that will ultimately result in new experiences for customers.

The more than 433 million LinkedIn accounts worldwide are responsible for 105+ million unique visiting members per month, of which 60 percent visit the site on mobile devices.