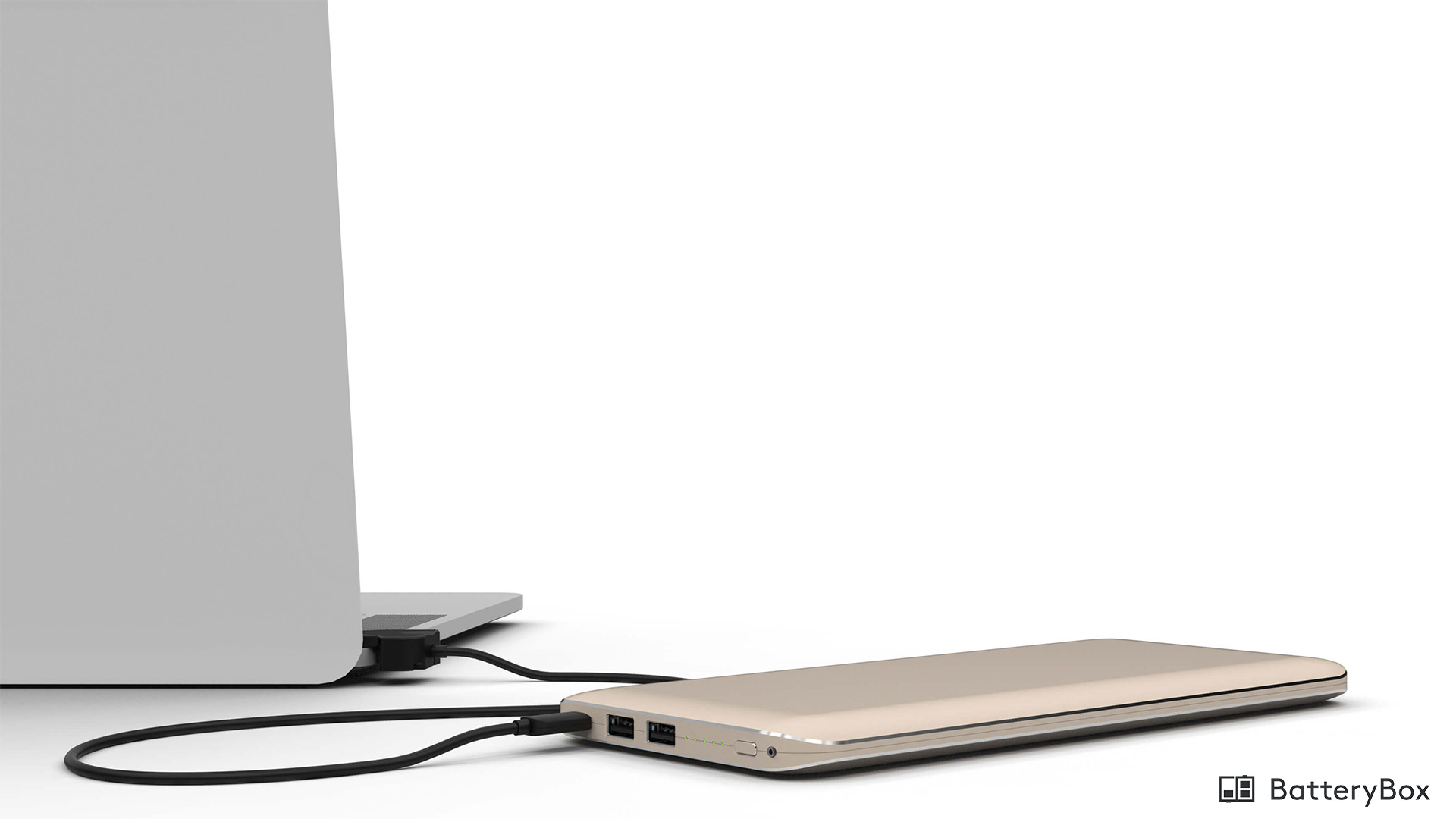 BatteryBox is launching a new pre-order special for its updated line of external batteries for Mac laptops and mobile devices that use a USB charger, such as iOS, Android, Windows Phone, and various other types of devices.

Dubbed BatteryBox Slim, the new battery not only looks better with its color-matched aluminum external finish, but it comes with a slew of new features that are going to make this one of the best options on the market to date.

BatteryBox Slim: what to expect

BatteryBox Slim is not just an external battery pack capable of hooking up your Mac’s MagSafe port and charging your mobile devices simultaneously, just like the original BatteryBox we showed you last year. Instead, it’s much more than that.

The battery pack has been redesigned with a slim form factor in mind, and it now has a detachable cable that uses a USB-C port on the unit itself. This was one of the biggest beefs with the previous generation, and by utilizing the young USB-C standard, the unit gets a touch of Apple-esque classiness.

BatteryBox Slim is thin enough, at just 15 mm, to tuck away into any laptop bag with your MacBook Pro, MacBook Air, or MacBook. On the other hand, it has to get its volume capacity somewhere; instead of being a big boxy block, the 1.32-pound device has more of a pad-shaped design now.

Shown below, you can see how the size compares to a hand: 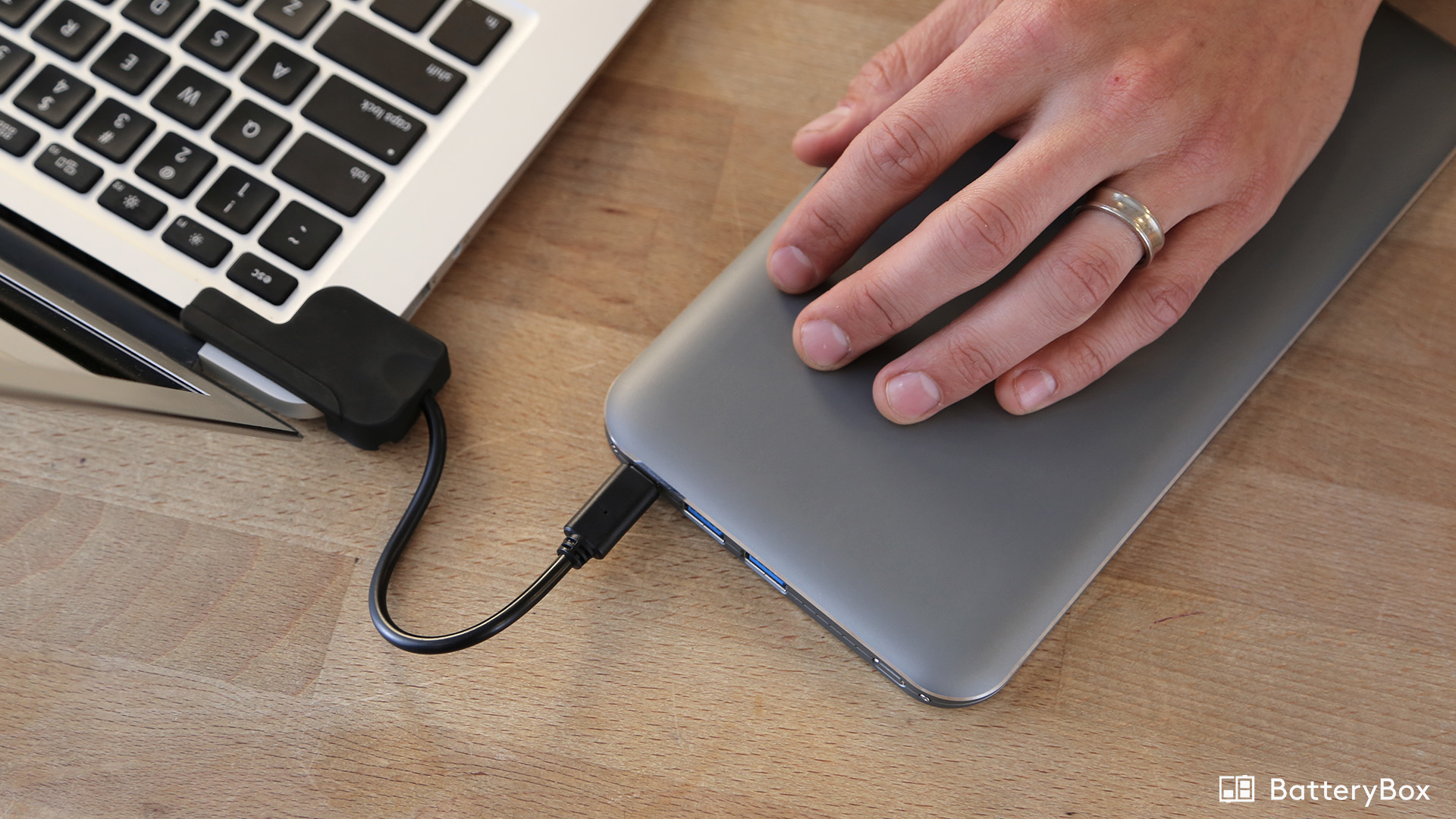 Unlike the previous generation BatteryBox, BatteryBox Slim even doubles as a data hub, which is perfect for devices like the MacBook, which need external USB ports due to having just one USB-C port. With this, you can keep your MacBook powered, all while providing it with the additional ports you want to have.

Take note of the external CD/DVD drive and USB flash drive that are connected to this BatteryBox Slim all while it charges the pictured MacBook: 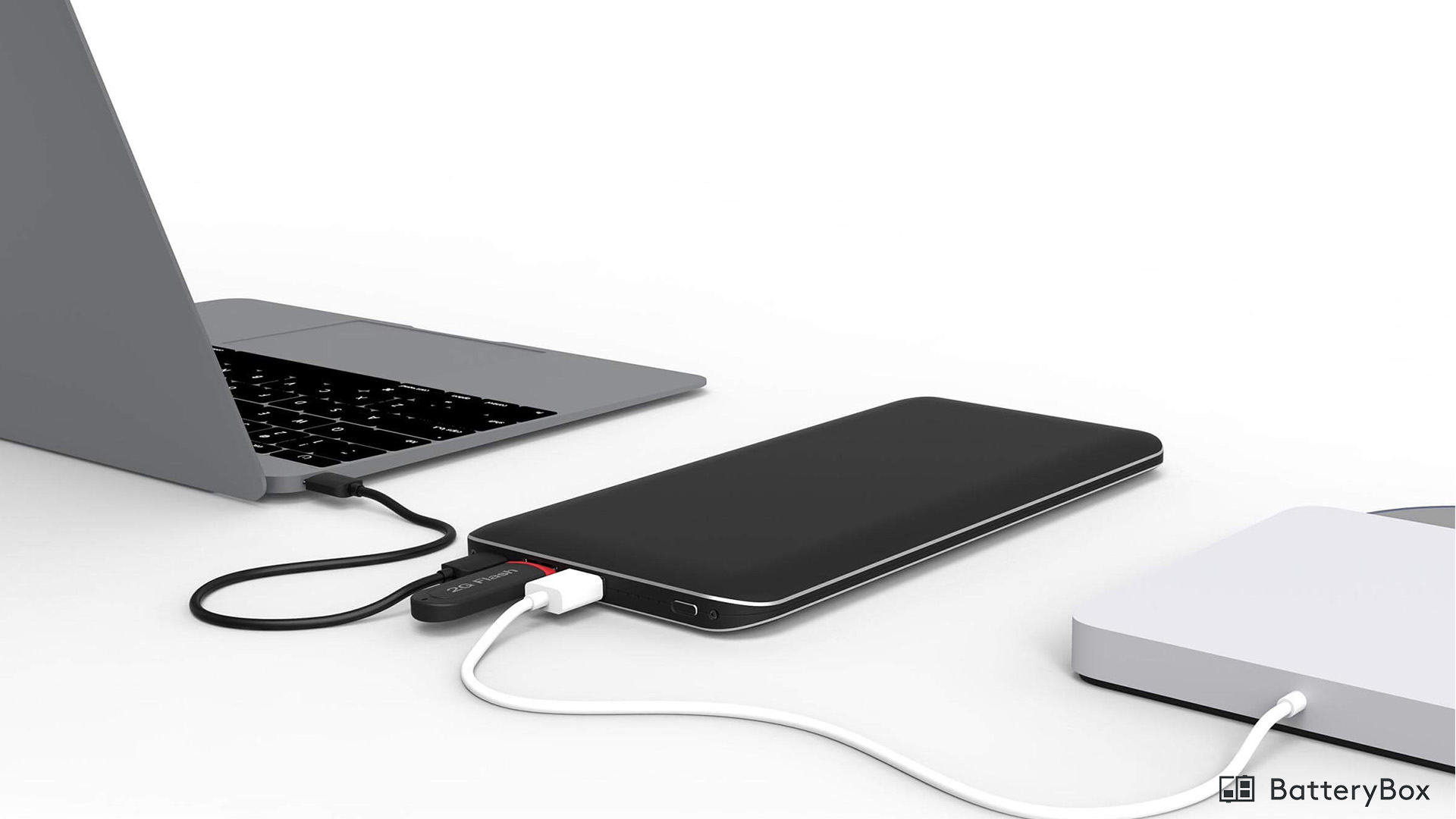 BatteryBox Slim doesn’t just include the features shown above. In fact, the well-known BatteryOS that powers the original BatteryBox is still found in the heart of BatteryBox Slim. This means BatteryBox Slim will last well over 3,000 charge cycles without battery deterioration. The internal operating system even ensures devices are charged as quickly and safely as possible.

Moreover, the unique connector ensures your MacBook/Air/Pro is powered directly, rather than through its battery. This means the BatteryBox Slim actually bypasses the internal battery in your Mac completely to prevent wear and tear from eating at your OEM battery when you use BatteryBox Slim.

GBatteries notes that BatteryBox Slim, which has a whopping power capacity of 89 Wh / 24,000 mAh, can power the following devices for the following time frames:

During the time of the pre-order, you can reserve your very own BatteryBox Slim for $99.99, but when the product is available to the general public later this year (before Christmas), it’ll retail for about $139.99 on BatteryBox’s website.

The basic BatteryBox Slim comes with a USB-C cable, but you’ll have to tack on another $24.99 if you intend to get the MagSafe 2 cable for charging other MacBook models.

Also read: BatteryBox Mini, the tiny power bank that can charge it all

What are your thoughts so far on the new BatteryBox Slim? Share in the comments below!