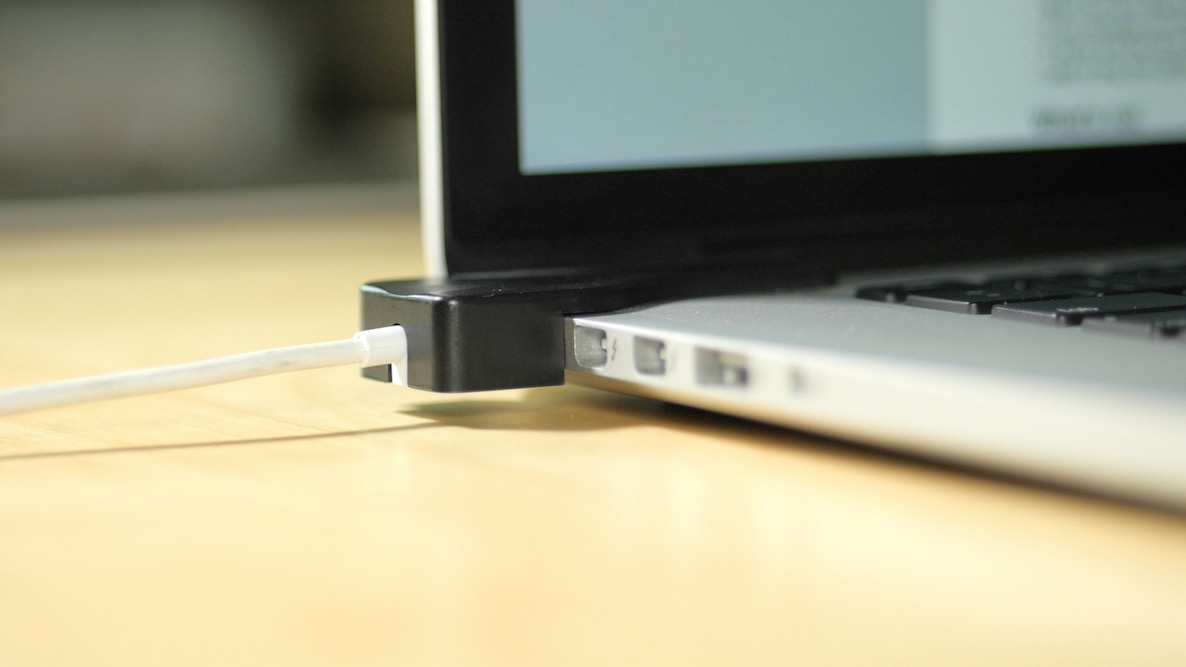 I’ve been using Gbatteries’ BatteryBox ($219 on Amazon) portable MacBook-enabled battery charger for several months, and now I’d like to share my thoughts on the device.

Needless to say it’s a very small device, but it’s also extremely dense and a little awkward to travel with. It’s essentially like carrying around a power brick from your favorite game console in the mid-90’s.

The BatteryBox is dense because it packs in a whopping 60 Wh rechargeable li-ion battery. That’s a lot of juice, and as such, it can power a MacBook Air for 13 hours straight. As a user of a MacBook Pro, the amount of time I get from the BatteryBox is obviously reduced, but I still came away fairly impressed with the results.

The BatteryBox can also charge other items, like iPhone and iPads, via a standard USB connection. In fact, it can fully recharge an iPhone up to 11 times, which makes it great for traveling where you power outlet access may be limited.

But what makes the BatteryBox stand out is the fact that it can connect directly to a MacBook’s charging port via a specially designed connector. Since Apple owns the patents to MagSafe connectors, Gbatteries had to come up with a different method for connecting to the MacBook. The BatteryBox is the result of its efforts, and it works well from my experience.

If you’re a MacBook user who’s often on the go, should you consider supplementing your MacBook’s battery with a BatteryBox? Find out inside… 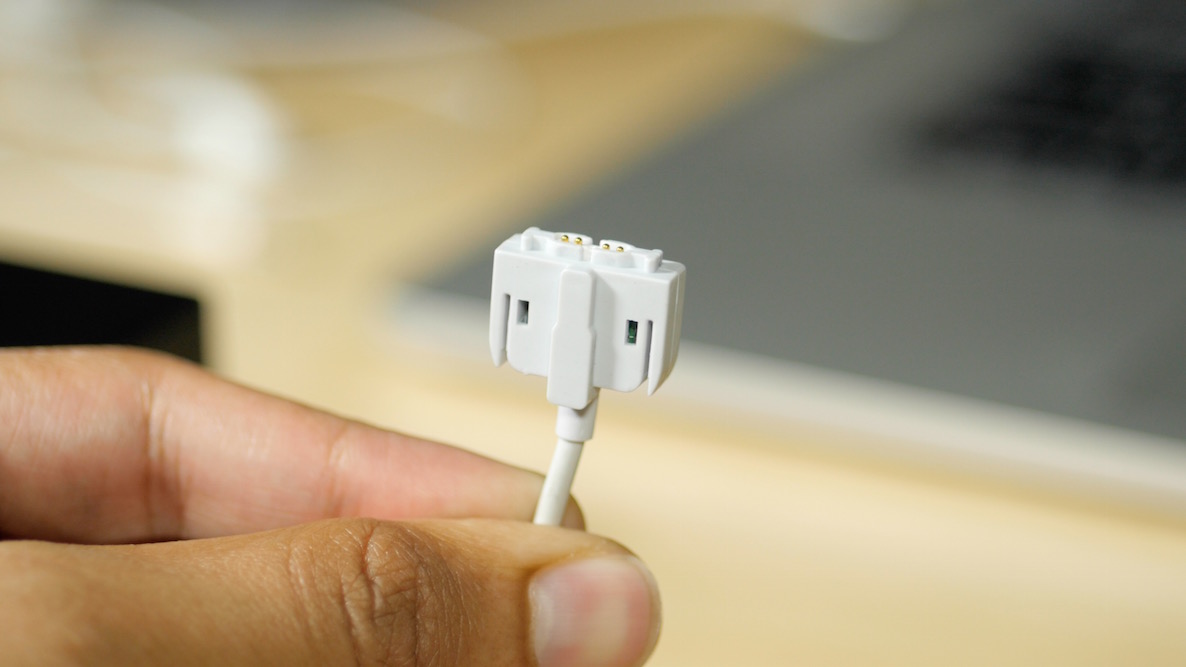 A change of mindset

First let me throw a few details at you about how this remarkable little box works:

When you connect the BatteryBox to your Mac, it simply works as a power source, and doesn’t actively charge the internal battery of your MacBook.

For anyone’s who’s used portable battery chargers for devices in the past, this may seem sort of strange. But there’s a good reason why the BatteryBox takes this approach. 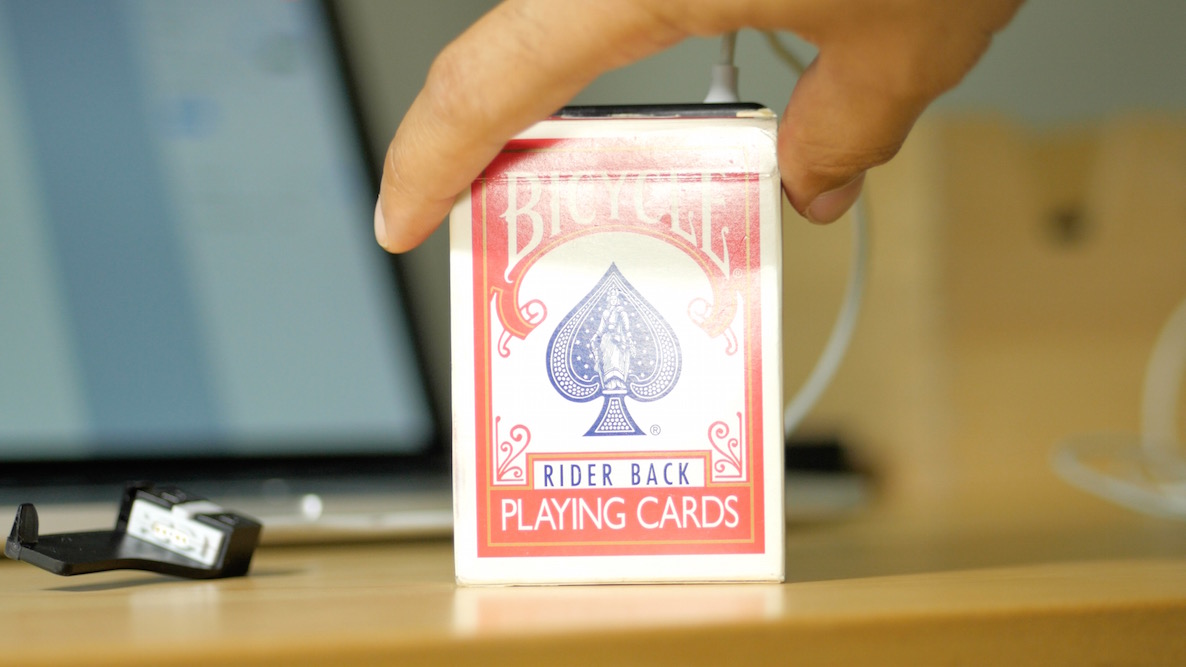 With this in mind, you may have to approach using the BatteryBox a bit differently. I’ll be the first to admit that it took me a while to get used to this approach, but once I did, the workflow just fell into place.

As previously stated, Gbatteries had to engineer a different kind of connector to make the BatteryBox play nice with the MacBook’s MagSafe port. For the record, the BatteryBox only works with Macs from 2012 and older. It’ll also work with the 15” Retina Macbook by using the USB connection instead of the MagSafe port attachment.

But the majority of people who will be looking at the BatteryBox are those running MacBooks with traditional MagSafe power ports.

To work with the MagSafe port, Gbatteries engineered something called the SnapFit adapter, which is a black plastic clip that lets your quickly attach to the side of the MacBook in order to charge.

Each BatteryBox comes with four SnapFit clips, which means that there’s a clip included that fits your MacBook of choice. The clip simply slides onto the BatteryBox’s cable charger end for a custom fit that will work with your particular MacBook model. To be honest, it’s nowhere near as elegant as Apple’s magnetic MagSafe adapter, but it works, and it works fairly well. It’s actually the only third-party connector that’s compatible with 2012+ MagSafe-enabled MacBooks. 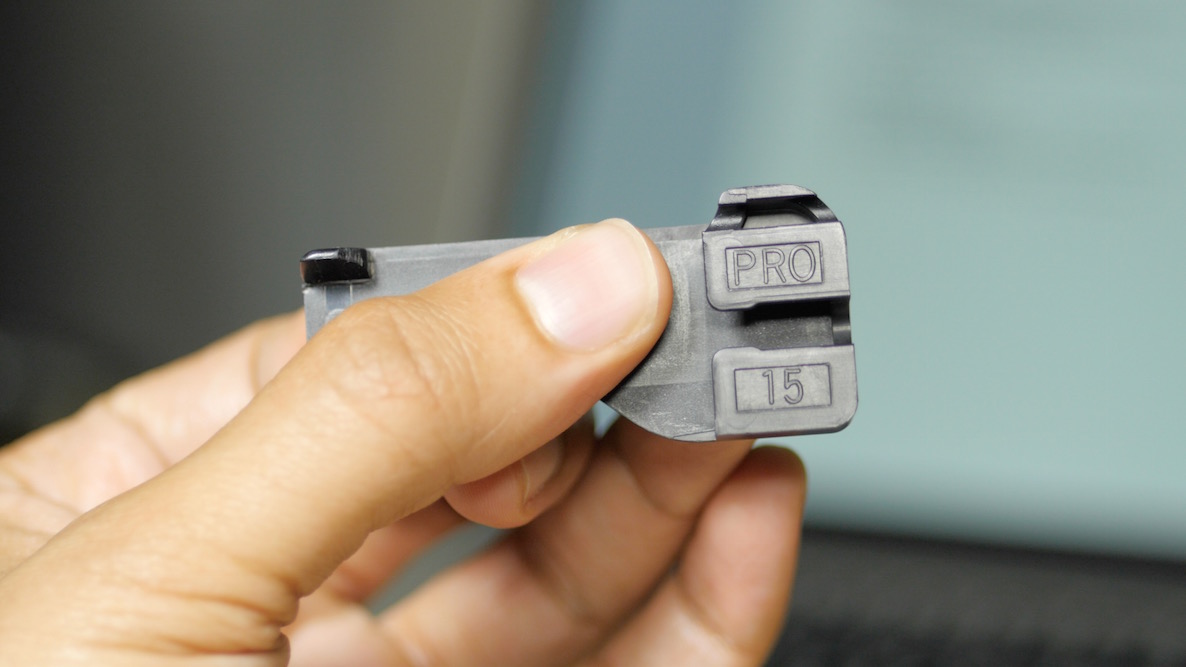 As I stated, though, the SnapFit connector is not as polished as a MagSafe adapter, and it does have one major caveat that I’ve found through my usage. Because you have to physically clip the SnapFit connector to the side of your MacBook, and because it secures itself on the edge where the MacBook’s hinge begins, you can’t close your MacBook’s lid while using the BatteryBox. 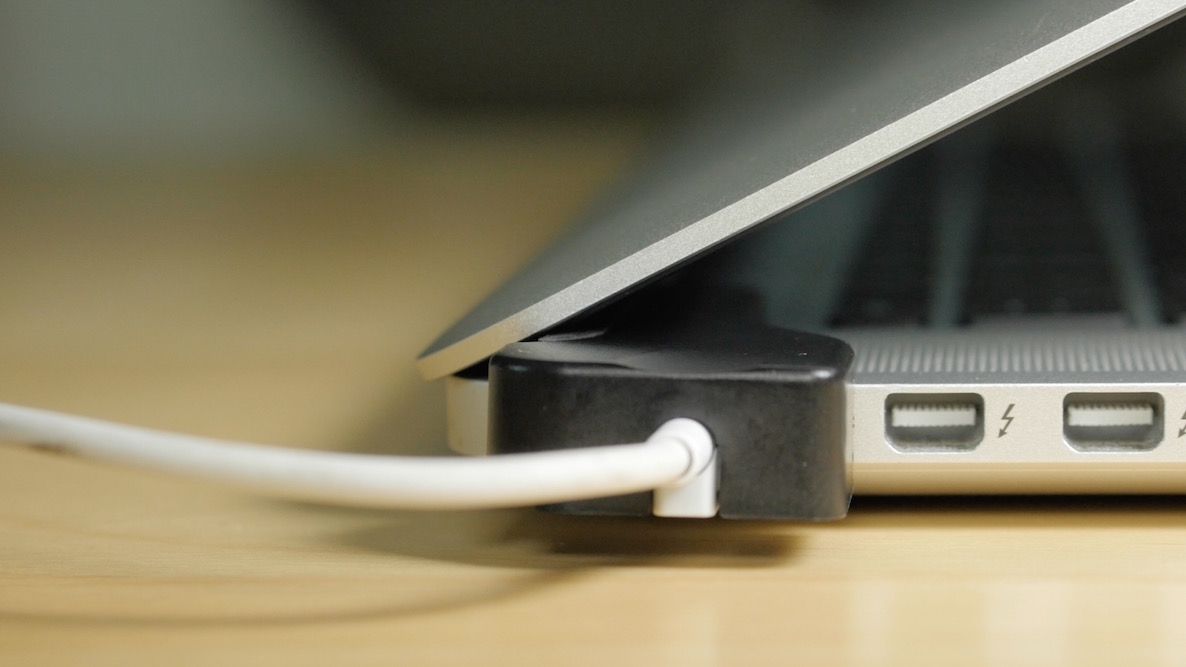 Fortunately, the BatteryBox was designed intelligently. The SnapFit connector is lined with a piece of soft rubber right where collisions may occur. It’s annoying to have to disconnect the BatteryBox from the MacBook prior to closing your lid, but it’s something you’ll have to learn to deal with.

What’s in the box

To charge the BatteryBox, just connect the supplied USB micro cable and plug it into the 2A USB power supply. The BatteryBox website says that you can also plug the USB cable into a computer, but in my experience, that takes absolutely forever to complete a charge.

I don’t have the exact figures for how long a BatteryBox takes to charge fully, I was never patient enough to sit there all day and watch it charge, but expect to wait several hours. This isn’t something you can charge for just a couple of hours before you leave for work. Charging the BatteryBox fully takes time, even when doing so via a wall outlet. I definitely recommend charging it overnight if you want a full charge ready to go the next day. 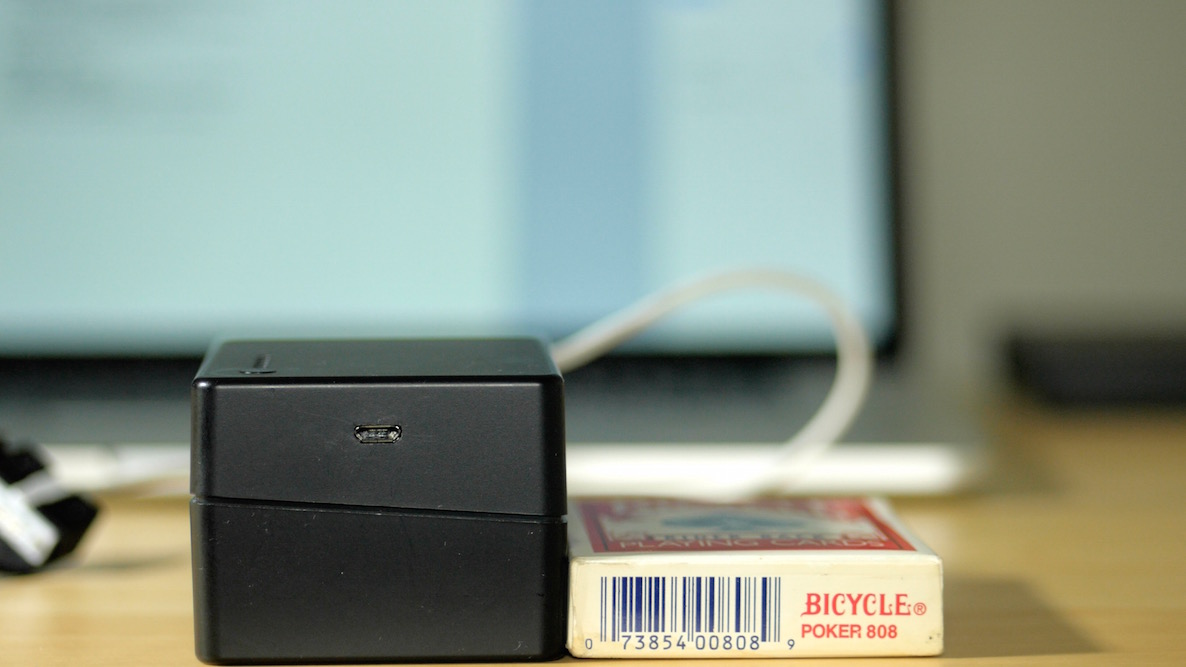 As you’re charging the BatteryBox, you can press the button on the top of the device, which will cause the LED lights next to it to light up. The more lights that light up, the higher the charge.

The LED lights are okay, but a more accurate method for discerning battery life would be better. I’d prefer to know exactly how much charge I have, and an estimate of how much longer it’ll take to fully charge the device using the current power source. 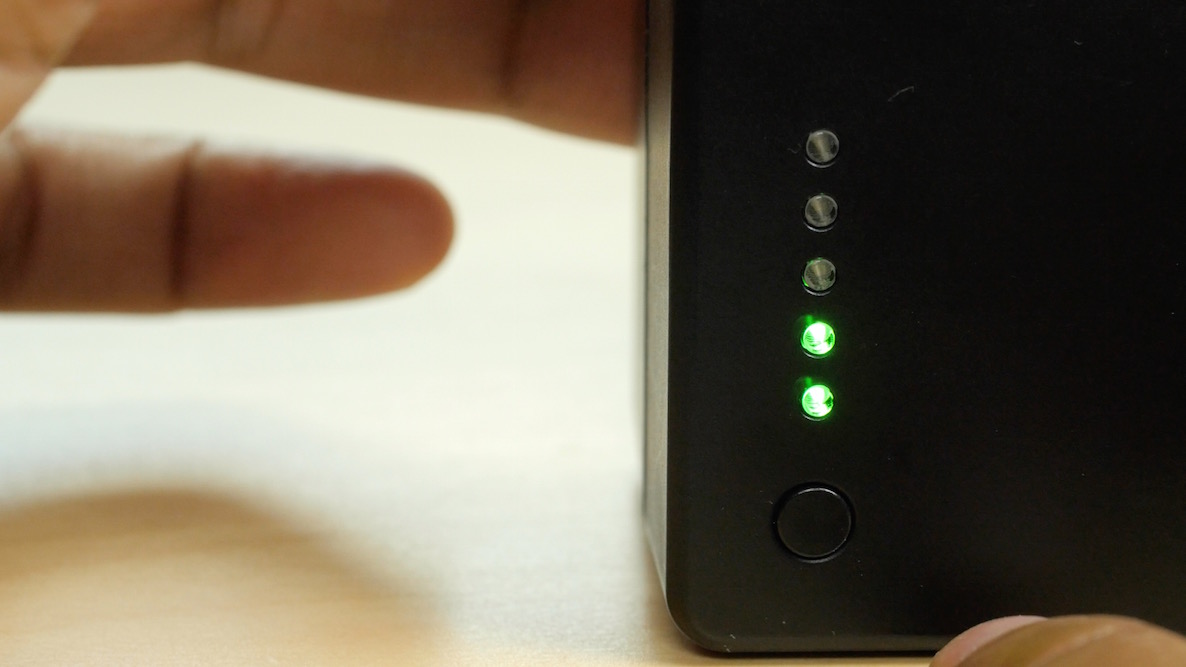 Using the BatteryBox with your MacBook is as simple as connecting its SnapFit connector to its MagSafe charging port. Once you do that, the MacBook will automatically switch over to the BatteryBox as its charging source.

After fully exhausting the BatteryBox’s battery, your MacBook will switch back to its internal battery automatically.

Although it wasn’t immediately apparent after a couple of uses, I found myself wishing for a longer SnapFit charging cable. If you move your MacBook around a lot, you’ll almost certainly need to grab the the BatteryBox along with it, as the cable is less than half the size of a standard Lighting cable.

Like I stated earlier, using the BatteryBox requires a change in mindset. I truly think it’s best to start using it immediately while you’re out and away from power. That way, you can use up its juice up and maintain the power inside of your MacBook’s internal battery for later usage.

When I’m out and about, usually I’m passively reading content, or at the very most, I have Pages open or a web browser open and I’m writing content. I usually don’t work on videos or other processor-intensive tasks while I’m away from the office.

The BatteryBox does excellent in situations where intense computing is kept to a minimum. I run a 15” Retina MacBook Pro, which gets a reported 5 hours of life from a fully charged BatteryBox. While that’s definitely the case when just writing or doing light web browsing, that number drops really fast when I start working on video editing, as you might expect.

Is the BatteryBox for you? If you travel with your MacBook and often find yourself running low on battery, then it’s definitely worth considering. But you also have to consider the type of Mac you have, and how you use your MacBook, too.

Are you always moving with your MacBook? The short cable may prove to be an annoyance.

Are you doing a lot of intense work on a 15” Retina Macbook Pro with a discrete graphics card? Then you may decide that the extra couple of hours gained may not be worth the investment. MacBook Air owners, on the other hand, gain extreme benefits from the BatteryBox. 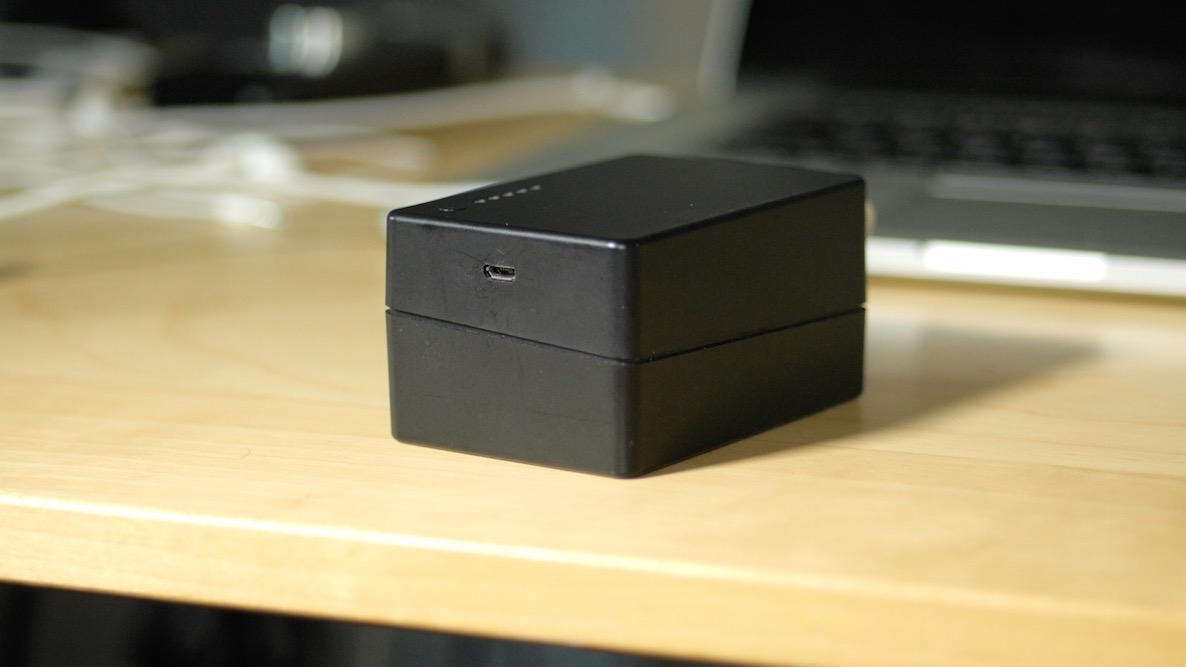 Ultimately, you’re going to have to honestly break down your workflow, style of work, and the type of MacBook you own.

The BatteryBox is an amazing device for those of you whose style it fits. It includes awesome internal software for managing the battery (read more about batteryOS here), and it can genuinely add hours and hours to your MacBook under the right conditions. On top of all of that, it can charge your iPhone, iPads, and Android devices via USB. It even plays nice with the 2015 MacBook with Retina Display, thank to its ability to charge via USB.

Simply put, the BatteryBox could be the difference between getting your work finished, and not.

Even though it’s not an impulse buy at slightly over $200, it should last for years, and will eventually pay for itself if it allows you to work longer uninterrupted while away from a power source. If, after reading this review, you think that the BatteryBox fits your circumstances and work style, then buy it.