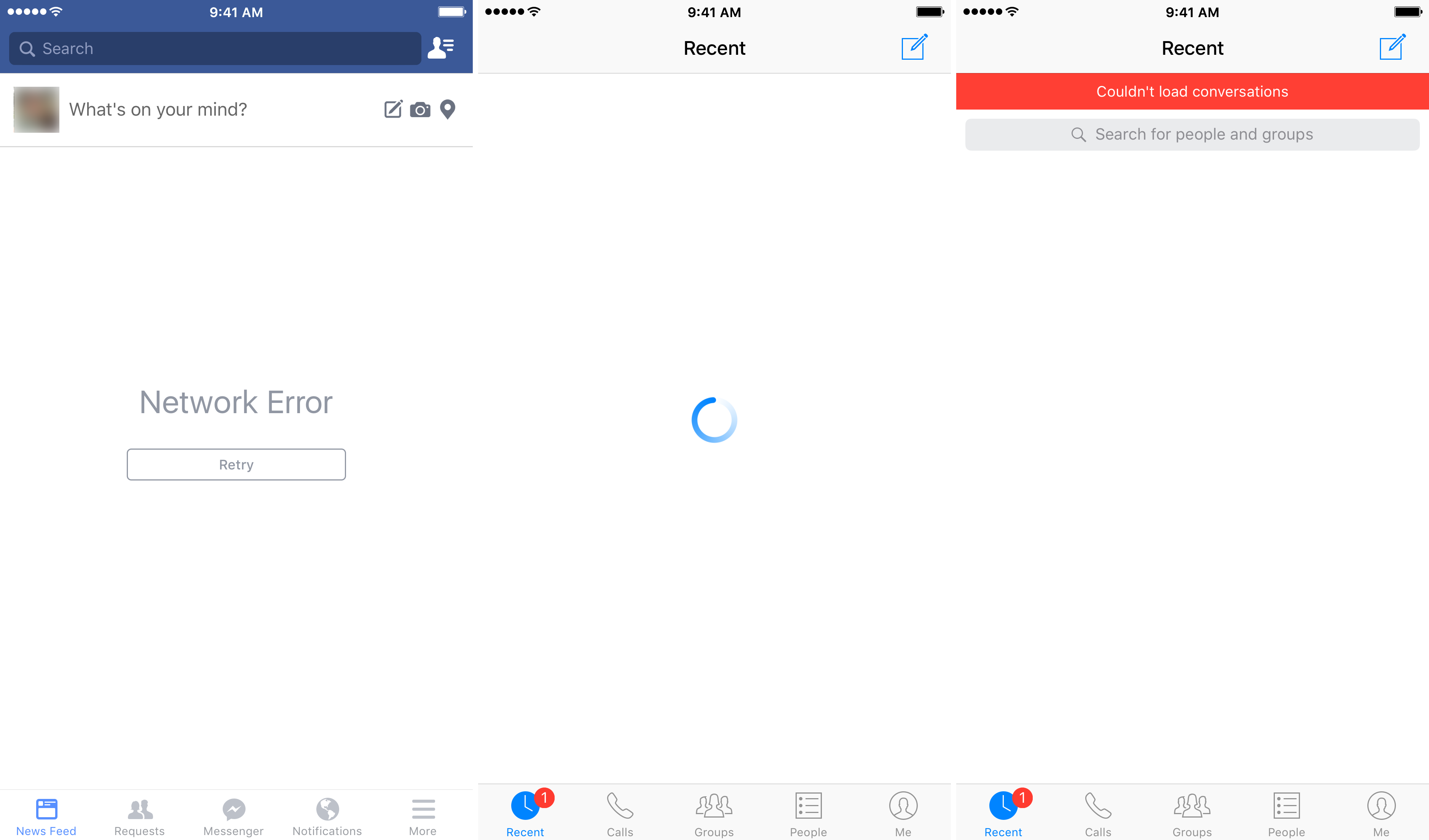 I am a Facebook user, as I am sure many of you are too. With that being said, you may or may not be familiar with loading problems that can occur while using the social network via the free iOS app. In this troubleshooting tutorial, we’ll talk about some ways you can try to fix problems where the Facebook or Facebook Messenger app refuse to load.

I’m not just a Facebook user because I enjoy keeping in touch with friends and family, but I also use Facebook for work because one of my jobs deals directly with social media management. As a result, having downtime is somewhat of a problem for me.

Because I hate downtime with anything I use, I get pretty fumed when things stop working. On the other hand, when this type of problem happens to me, there are various steps I’ll try to get the app to work again so I can get back to doing what I need to on Facebook, or even in the Facebook Messenger app for that matter.

If you’re unable to load Facebook or Facebook Messenger for any reason, here are some steps you can take to figure out what the problem is:

Are you connected to the internet? It’s embarrassing to admit, but sometimes I’ll be trying to use Facebook only to realize that I’m not even connected to any Wi-Fi networks and my cellular signal is too low to grab a signal. This happens to me a lot in metal buildings when cellular signals aren’t great at reaching me.

Try refreshing: The Facebook and Facebook Messenger apps both have a pull down to refresh feature. If you are connected to the internet, then it’s possible that you just experienced a hiccup for one reason or another, and just need to refresh the content once again so it will load.

Close and restart the app: Try opening the App Switcher and closing out of the troubled app. Then, re-launch the app. Facebook has been known to be buggy on iOS before, and you should never put it past those silly Facebook app developers to have shipped a bug with your current app release.

Reboot your iOS device: An internet service on your iOS device may be having an aneurysm and not working as expected. This happens more on devices that have been tampered with, such as via jailbreak, than it does on stock devices. Nevertheless, a reboot could help.

Does the internet work in other apps? Try loading a web page in Safari, or open Twitter or another web app that will access the internet for data. If the problem is limited just to Facebook, then you can isolate this issue to a Facebook-only problem and not a problem with your network.

Is Facebook up to date? Make sure that the Facebook app is up to date by going into the App Store‘s Updates tab. Some services have been known to stop working if you’re using an outdated version of the app. Try loading again after installing any available updates.

Are you using a VPN? Some Virtual Private Network (VPN) services are either too slow to operate Facebook, or they may be blocking Facebook’s servers from providing you with refreshed information. Try disabling your VPN to see if the content loads without it.

Restart your wireless router: If you don’t have a cellular network because you’re using an iPad or iPod touch, or an iPhone without a SIM card, you may not have any other option than to troubleshoot your own wireless network. Try restarting the wireless router to ensure that you have an active internet connection.

Report a problem to Facebook: Facebook’s iOS app comes with a great error-reporting feature that can be used to help resolve your particular problem. If none of the above steps worked for you, try reporting your problem to Facebook. We’ll detail how to do that below.

So if nothing we talked about above was able to resolve your problem, then you’ve got us stumped, but Facebook should be able to help you out directly. Assuming you do have a basic access to the app, you can follow these steps to report a problem from the iOS app:

1) Open the Facebook app and go to the More tab.

2) Tap on Help & Support and pick Report a Problem.

3) Either, enable Shake phone to report a problem and follow the prompts… 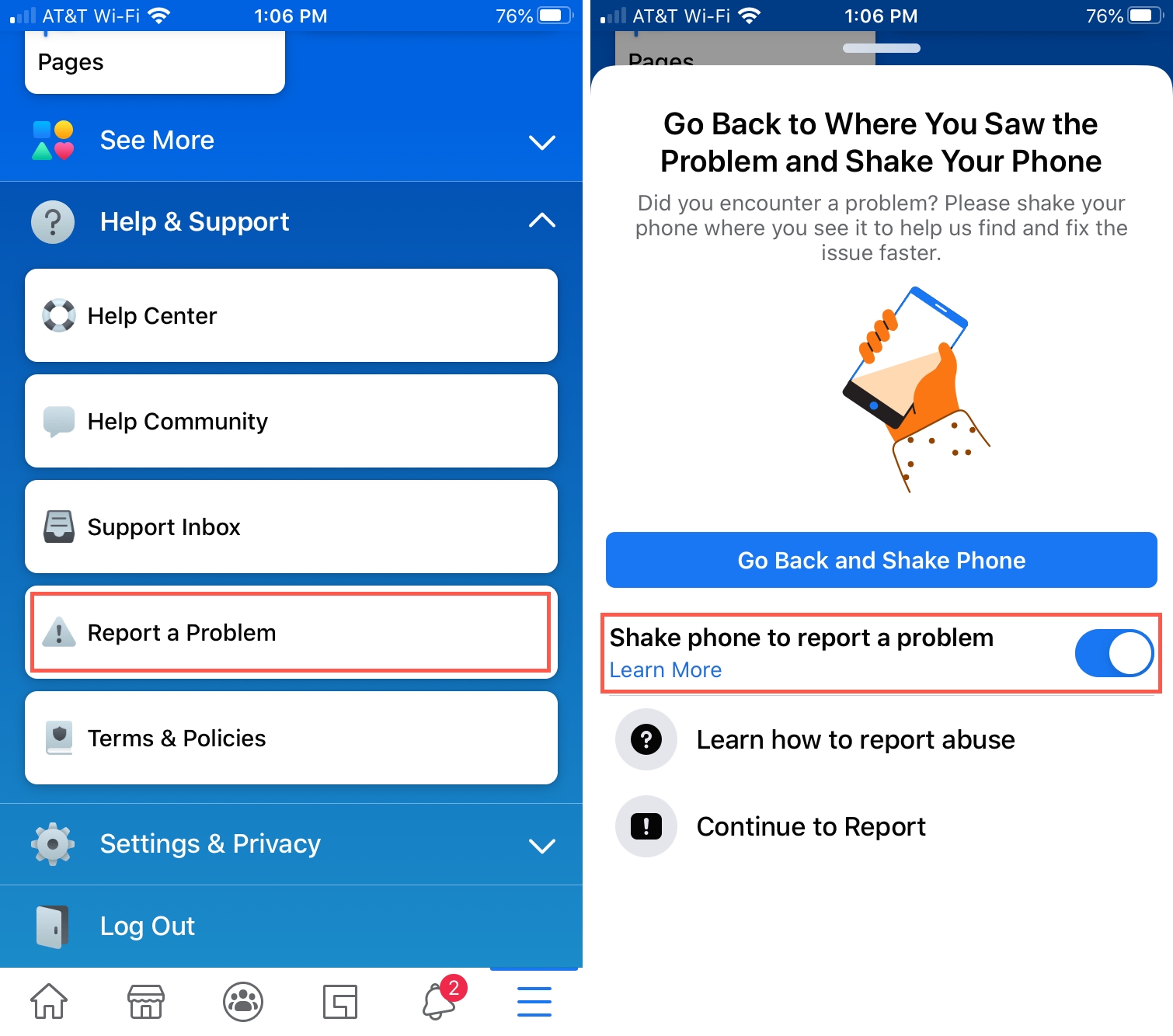 …or, disable that option and tap Report a Problem.

4) Select or search for a feature and follow the prompts to report your issue. 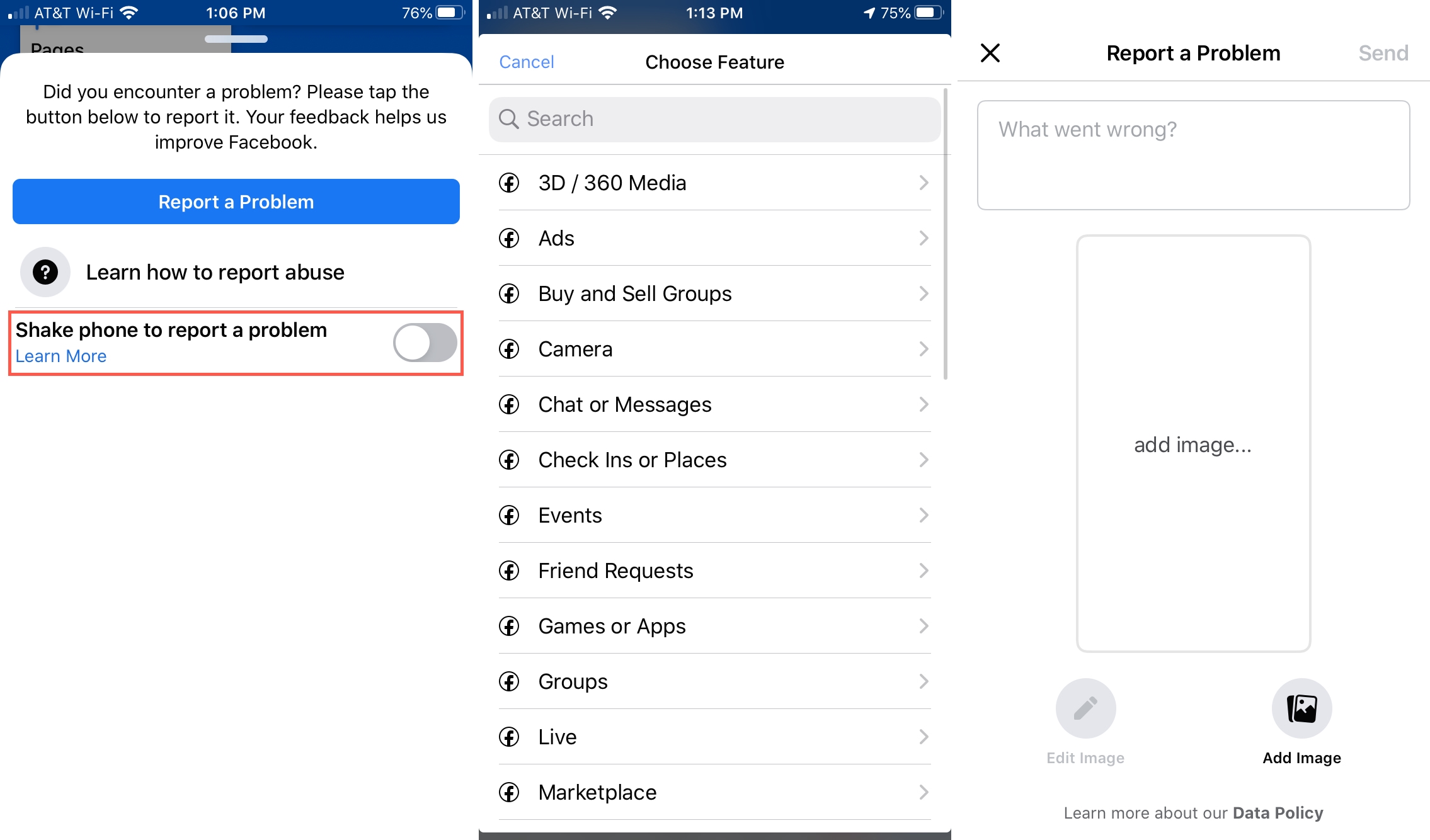 That’s all there is to reporting a problem with Facebook; hopefully you hear back from them soon!

I understand how annoying it is when Facebook or Facebook Messenger apps don’t load when you want them to; especially when you have a pending notification and it seems like you can’t get to it because the service refuses to load.

On the other hand, hopefully you were able to resolve the problem with one of the steps above.

Other solutions to common problems:

Has Facebook ever failed to load on your iOS device before? How did you fix it? Share in the comments!