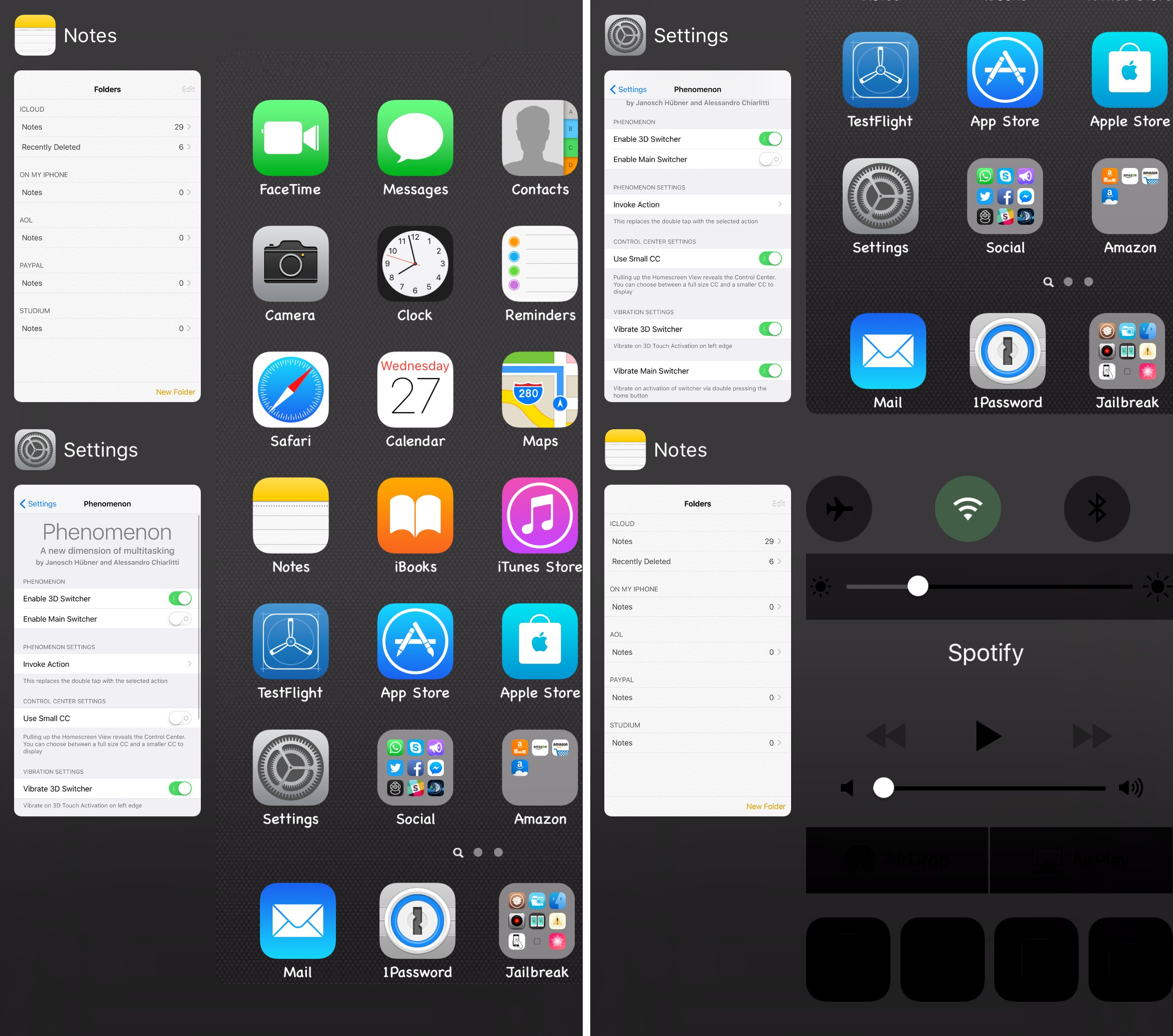 In terms of utilitarian thinking, the current App Switcher and Control Center interfaces in iOS 9 do their jobs just fine.

Yet another new Cydia release to do such a thing is a jailbreak tweak called Phenomenon, which we’ll be showing you in this review.

Using Phenomenon as an App Switcher

It seems that the common goal of most modern App Switcher replacement jailbreak tweaks is somehow combining the App Switcher with Control Center into a single user interface. It’s only the execution and design that differs between each tweak.

Phenomenon, on the other hand, does a beautiful job. The tweak places your recently-used apps on the left side of the screen, and Control Center can be revealed from the interface by sliding up on the Home screen to the right of the recently-used apps.

Phenomenon is intended to work with 3D Touch from the left side of the screen on devices like the iPhone 6s, but even if you don’t have 3D Touch, the tweak is also built to work with Activator so you can still use it that way.

When you open the tweak’s preferences pane from the Settings app after installation, you will find that it has more functionality than meets the eye.

The things you can configure here include:

At the bottom of the preferences pane, you’ll even find a link to a guide on how to use the tweak, but there’s not much to the guide that we haven’t already went through with you at this point in time. Nevertheless, more features are coming in future updates, so the guide is subject to change.

My thoughts on Phenomenon

In all honesty, the moment I saw Phenomenon in Cydia, I thought to myself, “oh great, another App Switcher replacement tweak.” But when I got the chance to try it, I was blown away by the fluidity of animations and the overall look and feel of the interface itself.

The sliding animations and the focus on organization are among some of the biggest highlights of the Phenomenon App Switcher and Control Center in one. I also like that it doesn’t outright replace the stock App Switcher and can be used as an alternative.

On the other hand, my most disliked feature about the tweak is that the tap and hold gesture for removing all apps from the App Switcher has no animation of its own, and there’s also a small bug that causes the application previews to not always load on my device; they show blank previews instead.

The asking price of $2.99 seems a little steep compared to alternatives, as it seems most App Switcher replacement tweaks are trending around the $1.99 range. Although, if you like what you see, you may want to hop on it, as it’s made by an established jailbreak developer who keeps updates coming regularly.

Phenomenon, which can be had from Cydia’s BigBoss repository for $2.99, provides jailbreakers with a feasible App Switcher replacement that includes the Control Center interface tucked away in its intelligently-integrated interface.

What are your thoughts on Phenomenon? You can share in the comments below!