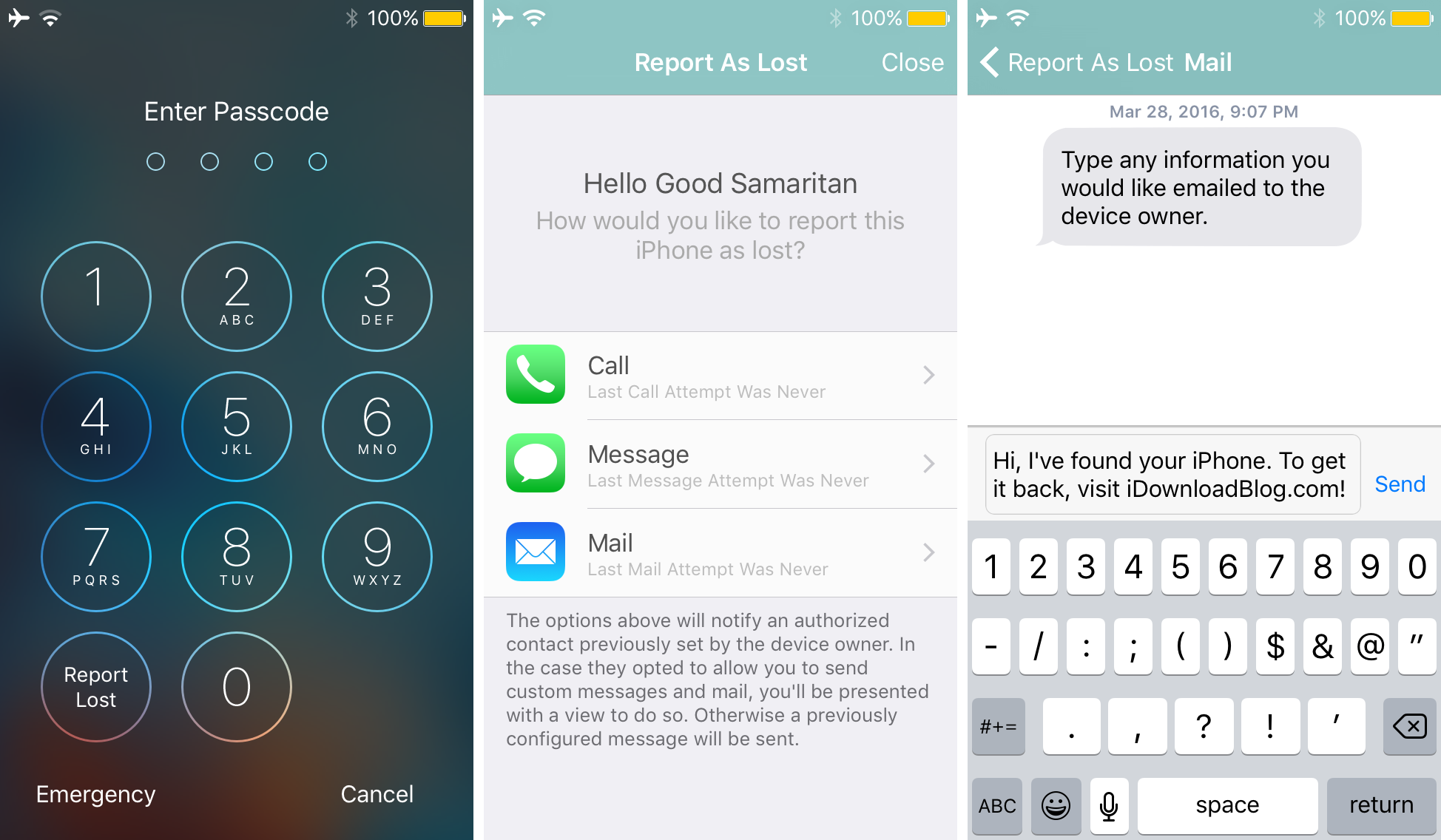 Nothing gives you a lower-sinking gut feeling than when you accidentally leave your $650+ iPhone sitting somewhere and forget about it, or when it ends up stolen.

Fortunately, good Samaritans now have an easier way to get in touch with you if your device is ever found thanks to a recent Cydia release called IfFound 3.

Indeed this jailbreak tweak is a new iteration of a tweak that has existed for ages, but it’s back and it’s ready for iOS 9, and in this review, we’ll show you exactly how it works.

IfFound 3 is a great way to let good Samaritans do their job after your iOS device is found in the wild if lost or stolen. The tweak adds a “Report Lost” button to the passcode keypad screen, as shown above, as well as to Control Center, which lets a good Samaritan get in touch with the device’s owner more easily in various ways. 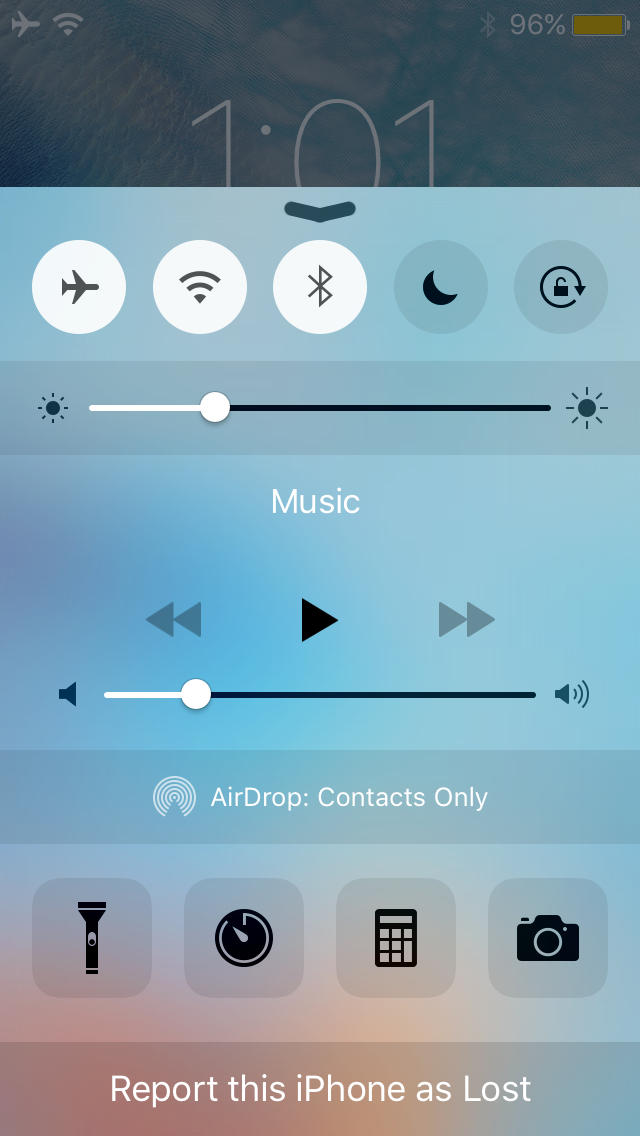 An example of the IfFound 3 button in Control Center

So what happens when the good Samartian taps on one of those buttons? – They’ll be directed to a screen where they can choose to email you, call you, or text message you. In our example above, we show you the email option.

As you can see, the email option lets the good Samaritan type something out to you, and then send it to your configured email address. They don’t see your contact information directly from this interface, but any emails they send you will go to your email inbox. Similarly, the person would never see your phone number, but any text messages or phone calls would still go through to you either to your Messages app or Phone app.

Obviously, this means you’ll have to set up contact information in the tweak’s settings so that the good Samaritan is directed to the proper form of contact to get the device back to you.

Speaking of setting up IfFound 3, you can launch the Settings app when you install the tweak and you’ll find a new preferences pane for it. Here, you can set up sending stealthy information to a contact method of your choice, as well as configure the buttons a good Samaritan can use to get in touch with you among other things. 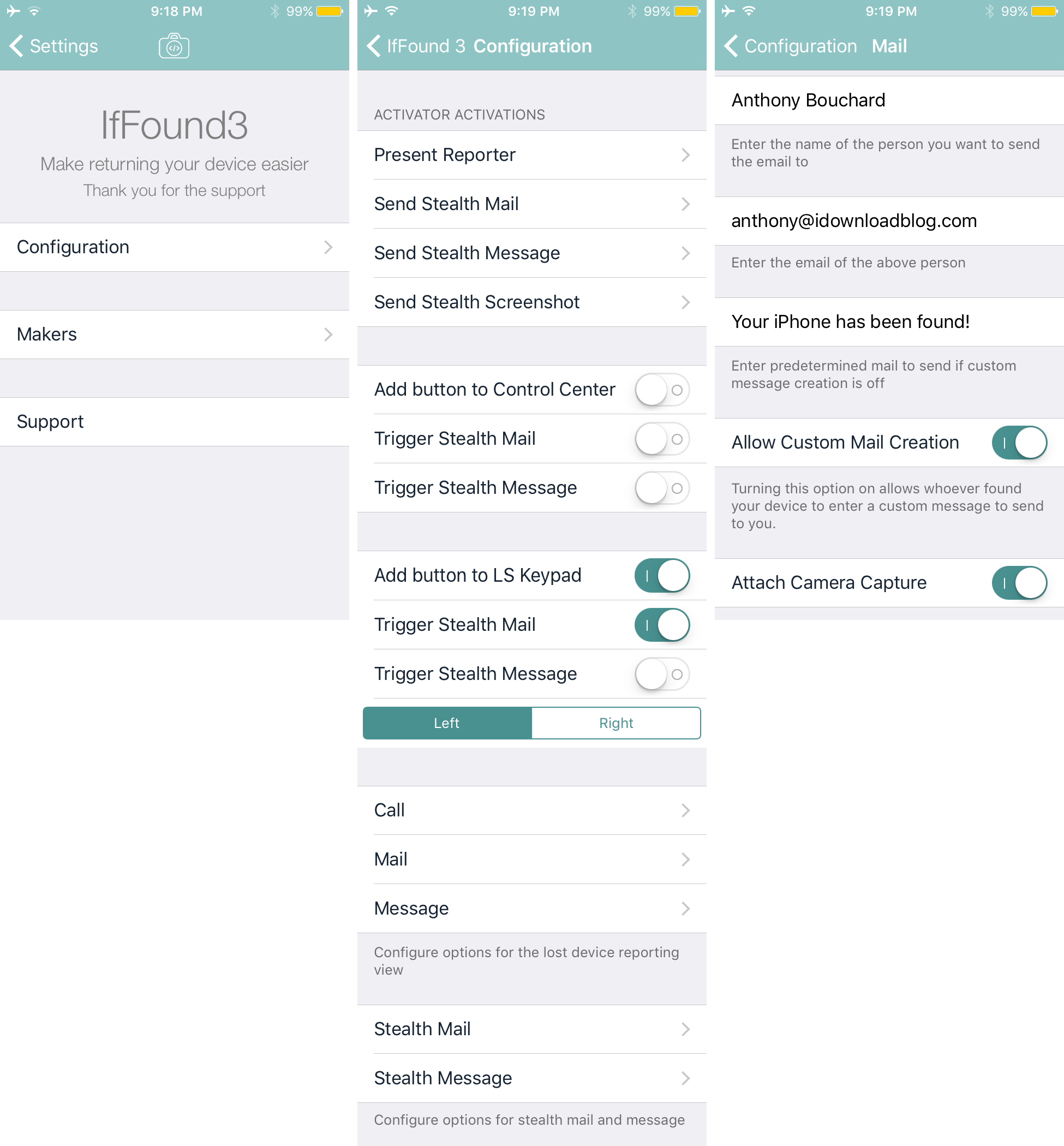 Some of what you can change in this set of options are:

After everything has been set up satisfactorily to your liking, I would suggest you try the tweak for yourself by sending yourself some test emails, texts, and calls via the IfFound 3 tweak, just to make sure you typed everything in correctly.

I think IfFound 3 is a great and intuitive way to track down your iOS device when it’s lost or stolen. Although Apple’s Find My iPhone app will let you track your device on a Mac, IfFound 3 goes a step further, giving you access to pictures and screenshots when the device is being used in an unauthorized way, and even lets a good Samaritan get in touch with you more quickly.

I would personally recommend having the passcode keypad-style button enabled, as a good Samaritan, especially one that doesn’t know how to use iOS because they come from another smartphone background, may not be as likely to launch Control Center.

Obviously, this tweak keeps honest people honest; if someone chooses to be dishonest, which in this day and age can be quite often, they could ignore the Report Lost button altogether and go about their business. With that being said, you have to consider for yourself whether or not this is a type of insurance you want to spend the money on or not. In many cases, it could be a good idea.

Also, in terms of comparing this tweak to Find My iPhone, Find My iPhone is still a useful tool that lets you track your lost or stolen device, but Find My iPhone doesn’t give a good Samaritan these contact mediums to get in touch with you when your device is found, so they’ll compliment each other nicely.

IfFound 3 makes it a lot easier on someone who finds your device to let you know it’s in safe hands and where to get it, but it can still always be ignored by a thief who chooses to be dishonest.

We can tell the tweak had a lot of time and effort put into it, but it’s always a gamble no matter how nice a jailbreak tweak looks on whether or not someone will actually use it. Nevertheless, IfFound 3 is available in Cydia’s BigBoss repository for just $0.99 if you’re interested in trying it.

Also read: What to do if your iPhone is lost or stolen

What are your thoughts on IfFound 3? Share in the comments!