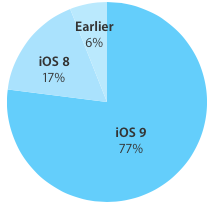 According to the latest stats published today on Apple’s App Store dashboard for developers, 77 percent of devices are now using iOS 9.0 or later.

The new data point, captured by the App Store on February 8, 2016, represents a one-point increase over the adoption rate of 76 percent recorded two weeks ago and a two-point gain versus the 75 percent figure that was captured a month ago.

In the two-week period ended February 8, 2016, iOS 8 has managed to held ground and continues to comprise about seventeen percent of iPhone, iPod touch and iPad devices.

iOS 9 adoption rates compare more than favorably to Android, which continues to suffer from hardware and OS fragmentation and the fact that vendors and carriers are dragging their collective feet with Android updates.

According to the Android dashboard for developers, Android 6.0 Marshmallow, which was roughly released around the same time as iOS 9, runs on only 1.2 percent of Android smartphones and tablets.

Various Android KitKat and Lollipop editions account for a combined 69.6 percent of active devices in the wild, as per Google. In other words, all Android versions released in the past two years combined don’t outpace iOS 9 in terms of adoption. 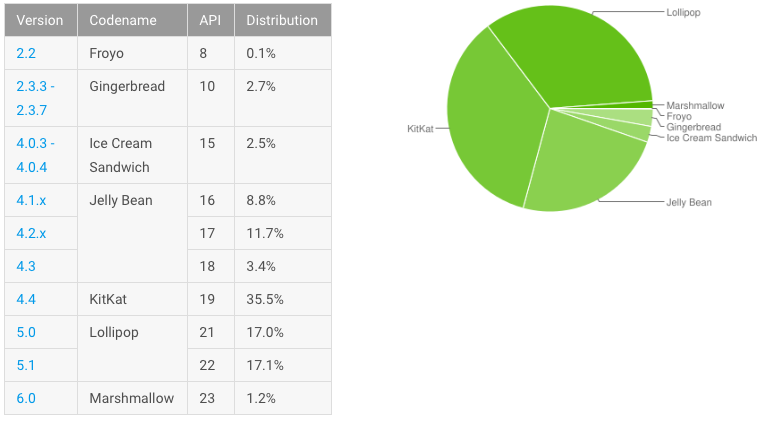 Data for Android was collected during a seven-day period ending on February 1, 2016 by logging devices that have actually visited the Google Play Store app. Since that app supports Android 2.2 and above, devices running older versions are not included.

Also excluded from Android adoption rate data: white-label Android devices running forked editions of Android and those that don’t run the Play Store and come preloaded with third-party application stores, which includes the vast majority of smartphones and tablets sold in China.

Apple said during an earnings call earlier this month that its active installed base has grown to one billion total iPhone, iPad, Mac, iPod touch, Apple TV and Apple Watch devices.

An active device is a gadget that has been been engaged with various Apple services, such as App Stores and iTunes, within the past 90 days.