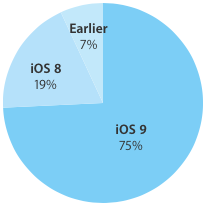 Apple’s iOS 9 operating system is currently powering three out of each four iPhone, iPod touch and iPad devices in the wild, according to the latest stats as measured by the App Store on January 11, 2016.

That’s a four-point gain over the 71 percent adoption rate for iOS 9 reported a month ago, a notable increase due to no doubt strong sales in the holiday quarter.

To me, that suggests that some owners of older devices have decided to upgrade to the latest and greatest version of Apple’s mobile operating system.

Despite iOS 8 numbers dropping by two percentage points and earlier versions of iOS by one point, that still doesn’t account for the four-point growth in iOS 9 adoption, meaning iOS 9’s growth in the past month came from both upgrades and new sales.

We will know precisely how Apple’s holiday quarter went when the company reports quarterly earnings later this month.