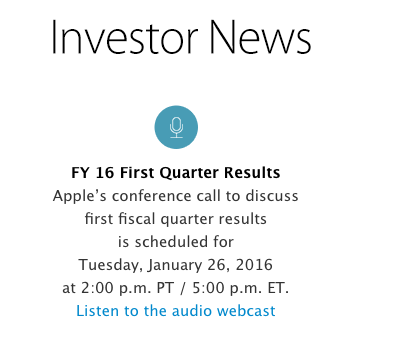 Apple just confirmed via its Investor Relations portal that it will be releasing financial results for its first fiscal quarter of 2016 (fourth calendar quarter of 2015) on Tuesday, January 26. As usual, the company will be hosting a conference call to discuss the results at 2:00 p.m. PT / 5:00 p.m. ET that day.

While earnings reports aren’t typically worth getting excited about, Apple loves to show off during the holiday quarter. The company routinely crushes smartphone sales and revenue records for the 3-month period, besting itself last year by moving 75 million iPhones and recording almost $75 billion in revenue.

Of course as the numbers get higher, growth gets harder. Some analysts believe that this year we’ll, for the first time, see flat or declining iPhone sales, despite the fact that Apple released new smartphone models in September, and has been seemingly more aggressive in marketing them to users on older handsets.

It’ll also be interesting to see if the release of the new iPad Pro and iPad mini 4, and all of the big iPad discounts we saw before the holidays, have helped inject life into Apple’s struggling tablet line. Last year it sold 21.4 million iPads during Q1, which was down nearly 5 million units from the same quarter in 2014.

As usual, we will be posting Apple’s Q1 2016 earnings on January 26 as soon as the report becomes available, and we will also be covering the subsequent earnings call with Tim Cook and CFO Luca Maestri. So make sure you tune into iDB that afternoon for a roundup of significant numbers and announcements.