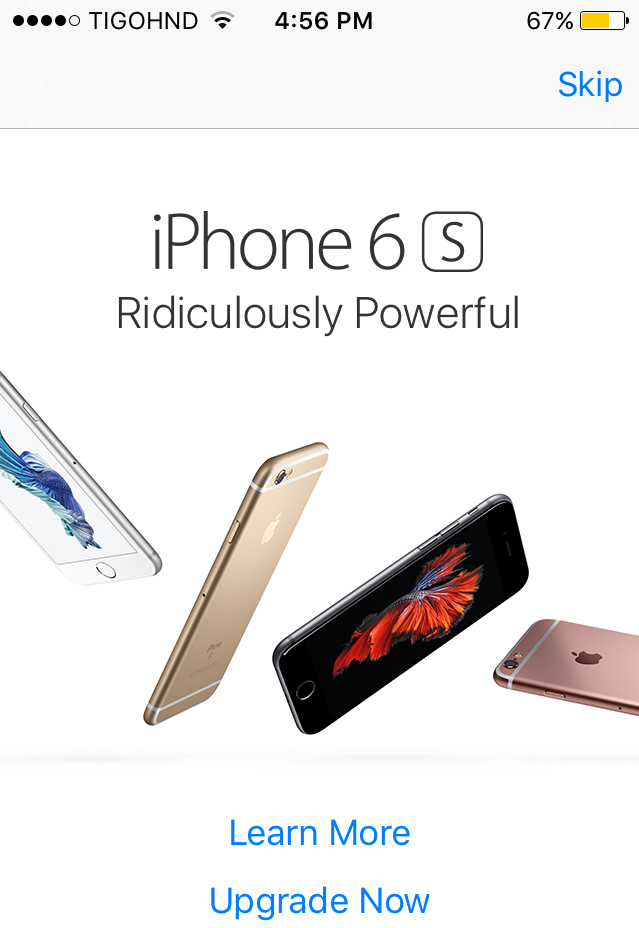 Twitter is on fire with reports from disgruntled users who were taken aback after witnessing a full-screen iPhone 6s ad taking over the App Store on their devices. The ad is, of course, from Apple itself and was conceived to persuade owners of pre-iPhone 6s models to upgrade to the ”ridiculously powerful” iPhone 6s.

The pop-up ad is full-screen and asks users to “Learn More,” which takes them to the iPhone 6s webpage on Apple’s website, or “Upgrade Now.”

The latter option redirects users to the the Buy iPhone 6s page inside the official Apple Store app, if installed. Want to get back to what your were doing? That’ll require tapping a dedicated button to dismiss the ad.

What a low ball move on Apple’s part

Why’s this supposedly mundane move on Apple’s part newsworthy? No matter how you look at it, Apple pushing unwanted ads to users inside the App Store is a very odd move. More worryingly than that is the fact that this ad for the “ridiculously powerful” iPhone 6s is ridiculously intrusive.

I wouldn’t go as far as to paint this as a move out of desperation: after all, larger-screened iPhones are selling like hotcakes. That being said, Apple should’ve known better than tarnish the brand by shoveling unwanted advertising down our throat.

Again, this wouldn’t be an issue if it weren’t for the intrusiveness: the ad’s shown without user intervention and forces you to tap “Skip”to get back to what you were doing.

Modal overlays should have no place in App Store

This isn’t the first time Apple has exploited the App Store to promote its own products, but banner ads that can be optionally tapped are one thing and requiring users to dismiss a full-screen ad with a dedicated button is on a whole different level. To my knowledge, this is a first for the App Store.

If Google pulled a stunt like this, no one would notice. But with Apple, every move is closely scrutinized (exhibit A: the “hump” on Apple’s new battery case) so I’m not surprised that this ad is blowing up and making headlines.

App Store banner ads are OK. But this…

That’s not saying Apple shouldn’t be entitled to experiment with App Store advertising, quite the contrary, but not if it means full-screen ads that degrade user experience, and that’s precisely the chief complaint here.

How do you feel about this ad? Are we making much ado about nothing or is it a legitimate complaint? Will Apple’s move backfire and cause angst among the most ardent fans, do you think?