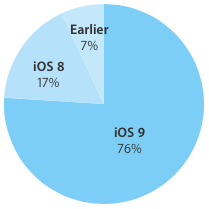 As measured by the App Store on January 25, 2016, and published on Apple’s App Store dashboard for developers, iOS 9 is now powering 76 percent of iPhone, iPad and iPod touch devices, a one-percentage point gain versus the 75 percent mark that was recorded two weeks ago.

At the same time, the adoption rate for iOS 8 has dropped from nineteen percent as of January 13, 2016, to seventeen percent, a two-point loss.

Older versions of iOS, which Apple marks as “Earlier” on its pie chart, continue to account for seven percent of devices out there.

In a rare move, Apple’s most recent quarterly report came with a supplemental material which, for the first time, has revealed the size of its active installed base: a cool one billion of iPhone, iPad, Mac, iPod touch, Apple TV and Apple Watch devices.

In Apple talk, only devices that have been engaged with various Apple services, such as App Stores and iTunes, within the past 90 days count as active devices.