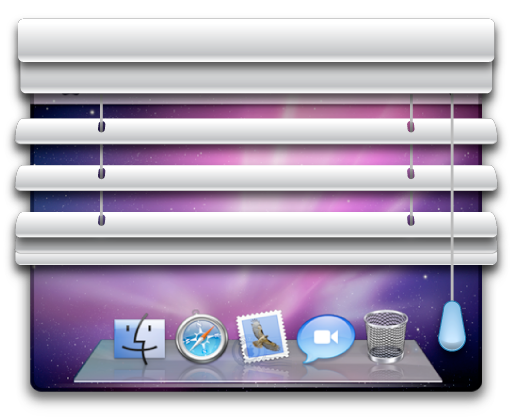 When you’ve pressed your display brightness down key on your Mac’s keyboard as many times as you can without the screen going completely black, and it’s still too bright for you, then you’re probably like me and need a way to further dim the display’s dimness level beyond the OEM minimum.

In this tutorial, we’ll show you a way to further decrease your display’s brightness when you’re in the dark so it’s easier on the eyes.

Why to dim your display even more

In events where you’re in a completely pitch black room, sometimes the lowest brightness setting for your Mac’s display doesn’t cut it. It still feels like you’re looking into a source of bright light and the ambiance isn’t very appealing.

Moreover, if you have a migraine, every last bit of display brightness makes a huge difference in comfort. Coming from a background of migraines myself, having too bright of a display hurts the eyes and further irritates your head in one of these scenarios, and having a completely dim display just bright enough to see in a pitch black room is the one thing you desire.

How to dim your display even further

Since your display brightness is really a function built into the back-lit display hardware of your Mac, the best and easiest way to get that lower brightness setting that you can’t seem to find is by using an app on your Mac that can add a dark shade overlay over everything you see on the screen to give you the illusion that your display just got darker.

One such app that is free and works great for this is Shady for Mac, which you can download for free. To use the app, follow these steps:

Step 1: Download Shady for Mac from the link provided above and open it.

Step 2: From the Menu Bar on your Mac, click on the Shady icon and take note of the Dark/Light slider. 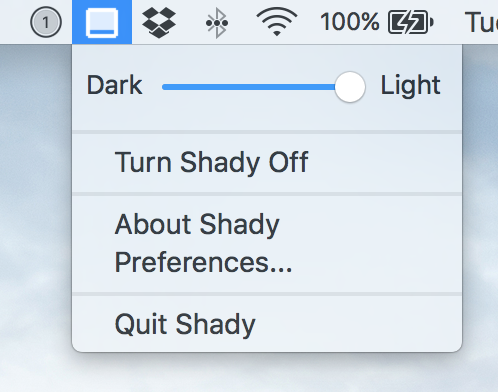 Step 3: Drag the slider down closer to the “Dark” label and your display will get a dark shade placed over it. 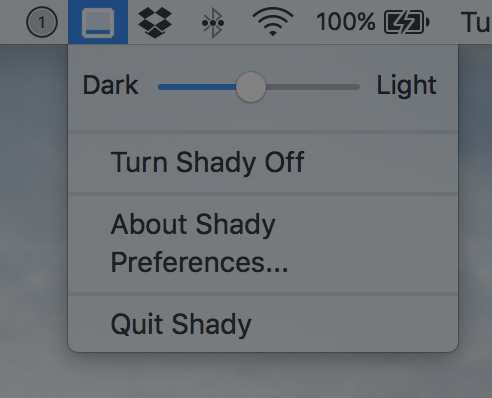 Step 4: That’s it! You now have a simple way of reducing the glare into your eyeballs in a dark environment.

The caveats of Shady for Mac

There are a few things that you need to know about using Shady for Mac because it’s important to realize what this app is really doing.

Although Shady for Mac isn’t technically lowering the back light on your display lower than OEM presets, it is placing a gray overlay atop your entire display so that the colors appear darker. This gives you the illusion of a darker display with less glare in your eyeballs. Since it’s only the display being affected by the changes, and not the LED backlight, you’ll notice that despite the dimmer display, the Apple logo on the back of your MacBook will still shine with the same intensity.

The one major drawback of using Shady for Mac is that the gray overlay being placed over everything means when you take screenshots, they will come out darker than they would without the overlay. Fortunately, if you ever need to take a screenshot, you can just return your display shade to the default before doing so and the colors will be correct when you take the screenshot.

Related: How to dim iPhone screen brightness below the normal threshold

Shady for Mac is a great way to quickly make your display appear dimmer than the lowest preset Apple gives you for display brightness. Although it’s not truly affecting the screen’s brightness, it does affect the color output to make the display easier on the eyes when you’re in complete darkness.

Despite the fact that there are other options out there, such as Sunset ($3.99 in the Mac App Store), Shady is free via the developer’s website and has the basic functionality you might be looking for.

Did Shady for Mac help you with your Mac display brightness woes? Share in the comments!