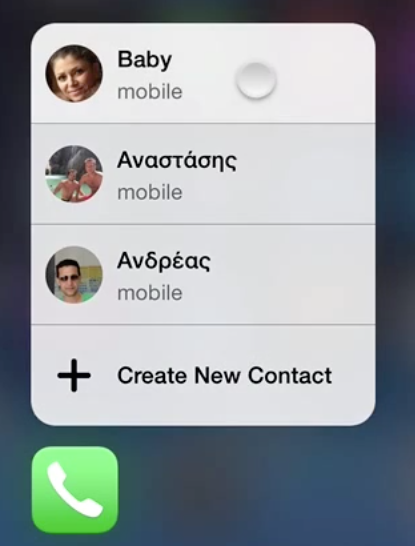 If you don’t plan on buying one of the new iPhones, but are intrigued by the iPhone 6s’ hallmark 3D Touch feature, you might want to listen up. Popular jailbreak developer Elias Limneos is currently working on a 3D Touch-inspired jailbreak tweak.

Since 3D Touch requires special hardware, this obviously isn’t real 3D Touch, but it emulates the 3D Touch feature by means of a long tap-and-hold gesture on the iPhone’s screen. The tweak, which is entitled Touch 3D, appeared in preview form on a recently posted YouTube video. Check it out and let us know what you think…

As you can see from the video, Limneos has 3D Touch-inspired shortcut gestures for the Phone app, Settings app, and Camera app. The tweak will likely feature Activator support for customizing the invoking method for the pop-up shortcut menus, but to align itself more closely to how the real 3D Touch works, users will be able to long-press on apps to bring up the shortcuts.

I guess it wouldn’t be right to finish this post without mentioning Velox. It was one of the first jailbreak tweaks to introduce these types of shortcuts, although Touch 3D more closely emulates the way Apple is doing it on the iPhone 6s.

Along with Touch 3D, Limneos is working on another new feature inspired by what we saw from Wednesday’s keynote—Live Photos.

What do you think about Touch 3D? Are there any other new features that you’d like to see jailbreak tweaks based on? Sound off in the comments below with your thoughts on the matter.