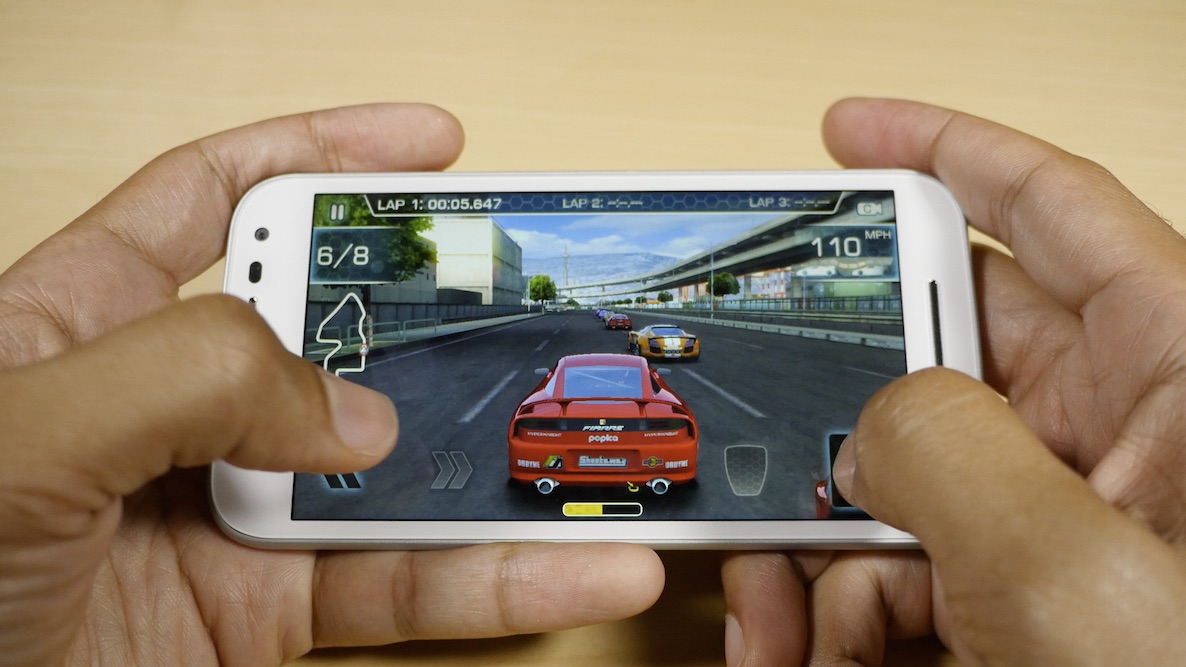 The Moto G is a budget Android smartphone line from Motorola that has nurtured a very good reputation in the tech community. The latest 3rd-generation Moto G, which debuted on Tuesday, is now available in stores like Amazon and Best Buy.

We’ve made it our mission to review various Android smartphones over the year in order to provide you with a balanced look at what the so-called “competition” is offering. As most of you know, I’m a die-hard Apple fan, but I do have a soft spot in my heart from Android, even though I think that many of the decisions that Android OEMs make are borderline shameless.

That said, I’ve been extremely keen on testing out the latest and greatest version of the Moto G, because I think it’s the perfect companion Android phone for iPhone users wishing to dabble into the “other side”. At a mere $179.99 unlocked, the Moto G is an outstanding value. Yes, there are other Android phones that fall within this price range, but they’re usually horrible specs-wise, or if they’re decent, they’re inundated with bloatware (I’m looking at you Asus ZenFone 2).

The Moto G is different. Not only is it factory unlocked, but it features decent specs for a phone this cheap. But most importantly, it lacks the bloatware so popular in other phones in this class, or even so-called flagship phones. True, it’s not a Nexus device, which is 100% stock Android, but it’s very close, and arguably, improves on stock Android with some of its unique offerings.

My goal with this review isn’t to convince you to switch to an Android phone, because if you’re reading this blog, chances are you’re as big of Apple fan as I am. The point of this review is to show you that this is the perfect gateway-phone to dip your toe into the Android waters, so to speak. If you’ve ever had the desire to try Android, or even if you simply desire a backup phone to your iPhone, then this may be a device worth considering.

My initial impressions were, well…this is what a $179.99 phone looks like. The presentation provided is definitely that of a budget phone. The box is cheap cardboard that feels like one of those Amazon frustration free packaging deals. Motorola really skimped on the packaging to save as much money as possible, and that’s to be expected. Honestly, who cares about the packaging on a sub-$200 phone?

As far as the actual device is concerned, it’s much more impressive than the packaging. True, it’s mostly made of plastic, but it doesn’t feel cheap and feels weighty to the hand. The nice thing about the Moto G is that it has metal accents, and if you take off the back cover, you’ll find an aluminum frame underneath. Build-wise, it’s a solid device.

I didn’t opt for any customization, although the Moto G can be fully customized by means of Motorola’s Moto Maker program on its website. Moto Maker allows you to customize the G’s front color, back color, aluminum accent, and more.

I just wanted to get my hands on the device as fast as possible, so I opted for a stock white on white configuration from Amazon. If I could do it again, I definitely would have opted for the custom color options, not to say that the white on white isn’t nice, but it looks sort of bland and inconspicuous.

Motorola includes an all-in-one charger, with an extra long charging cable. I like the all in one deal, because that means you won’t risk misplacing the power brick or the cable, as it’s just a single device. The cord for the charger is also extra long, noticeably longer than the Lightning cable that comes bundled with an iPhone.

Interestingly, my Moto G arrived with a 0% battery charge, which was kind of surprising. I’m used to devices arriving from the factory with at least enough charge to power it on, especially since these are brand new devices, but alas.

In the end, I ended up swapping out the 5v charger for a charger with higher output. The Moto G doesn’t feature the fast charging capabilities found in flagship Android phones today, but it definitely seemed to charge faster when I swapped out the stock charger. 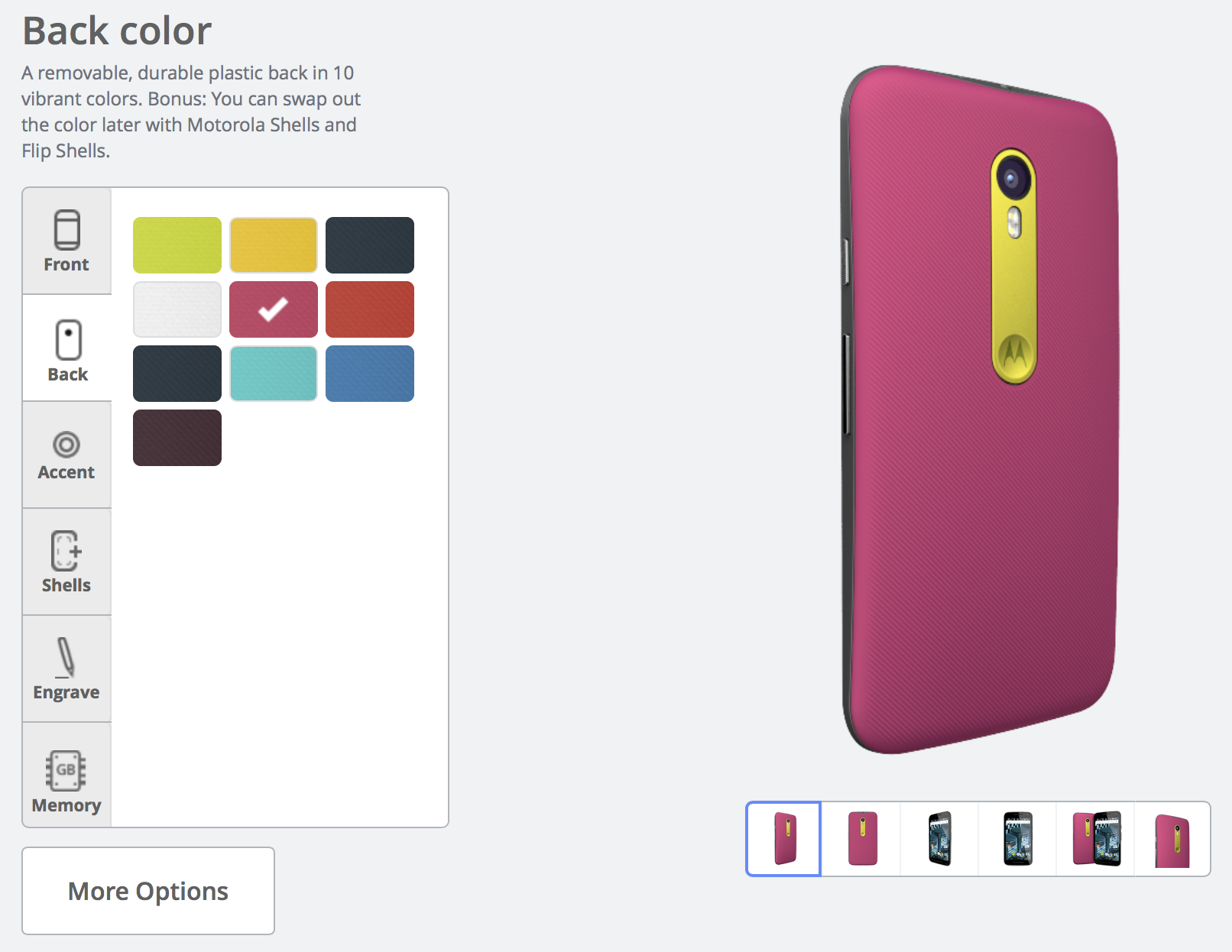 If you can afford it, it’s always best to go with the beefier configuration, especially when it comes to RAM. You can always pop in a microSD card to increase storage space, but RAM can’t be increased after the fact. Besides, $40 is not a lot to ask to essentially double the phones capacity on both a storage and memory front. 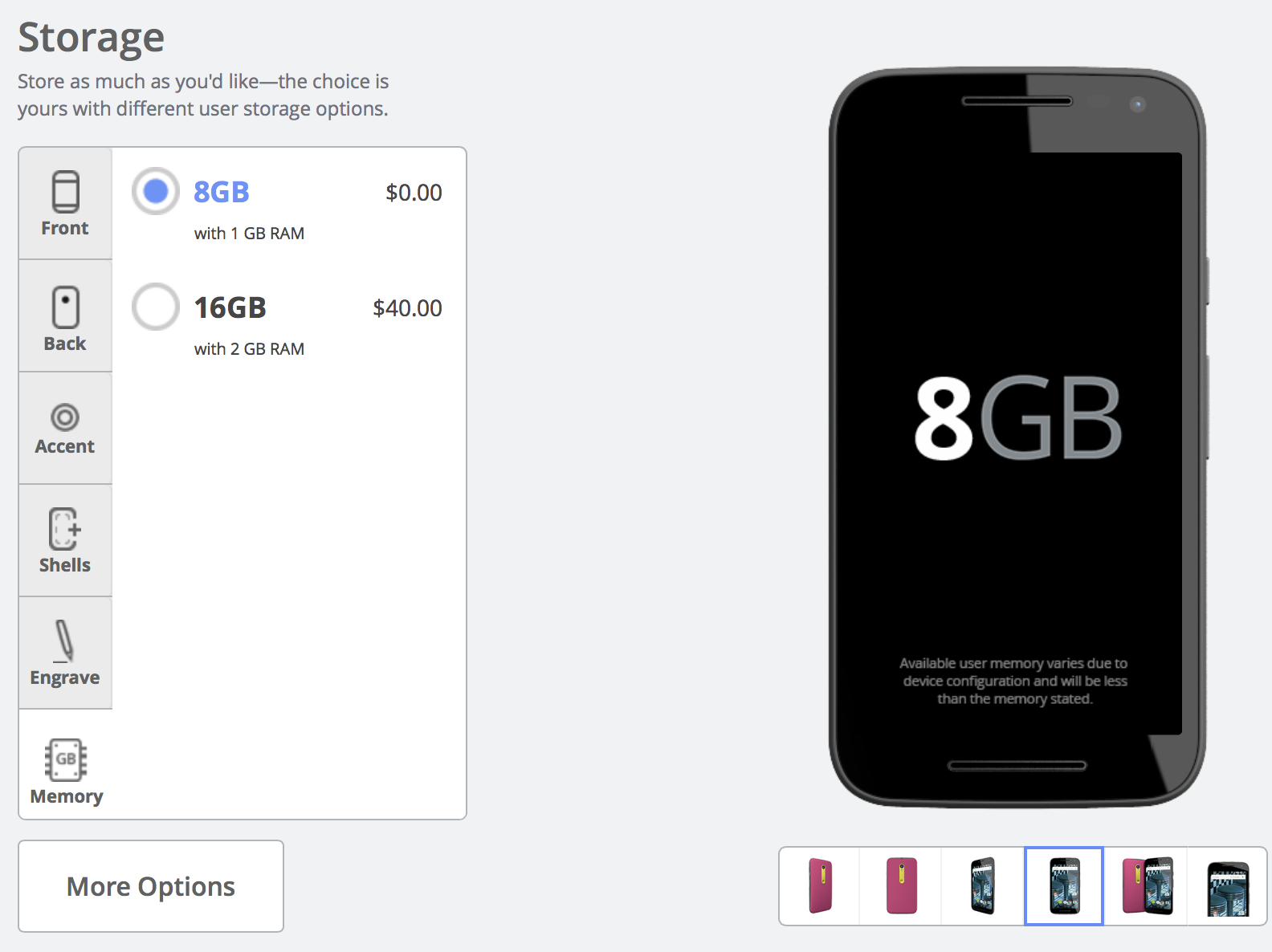 That said, I opted for the cheapest version, because I figured that’s what more people would opt for, and I wanted to see how the Moto G performed with this minimal configuration. 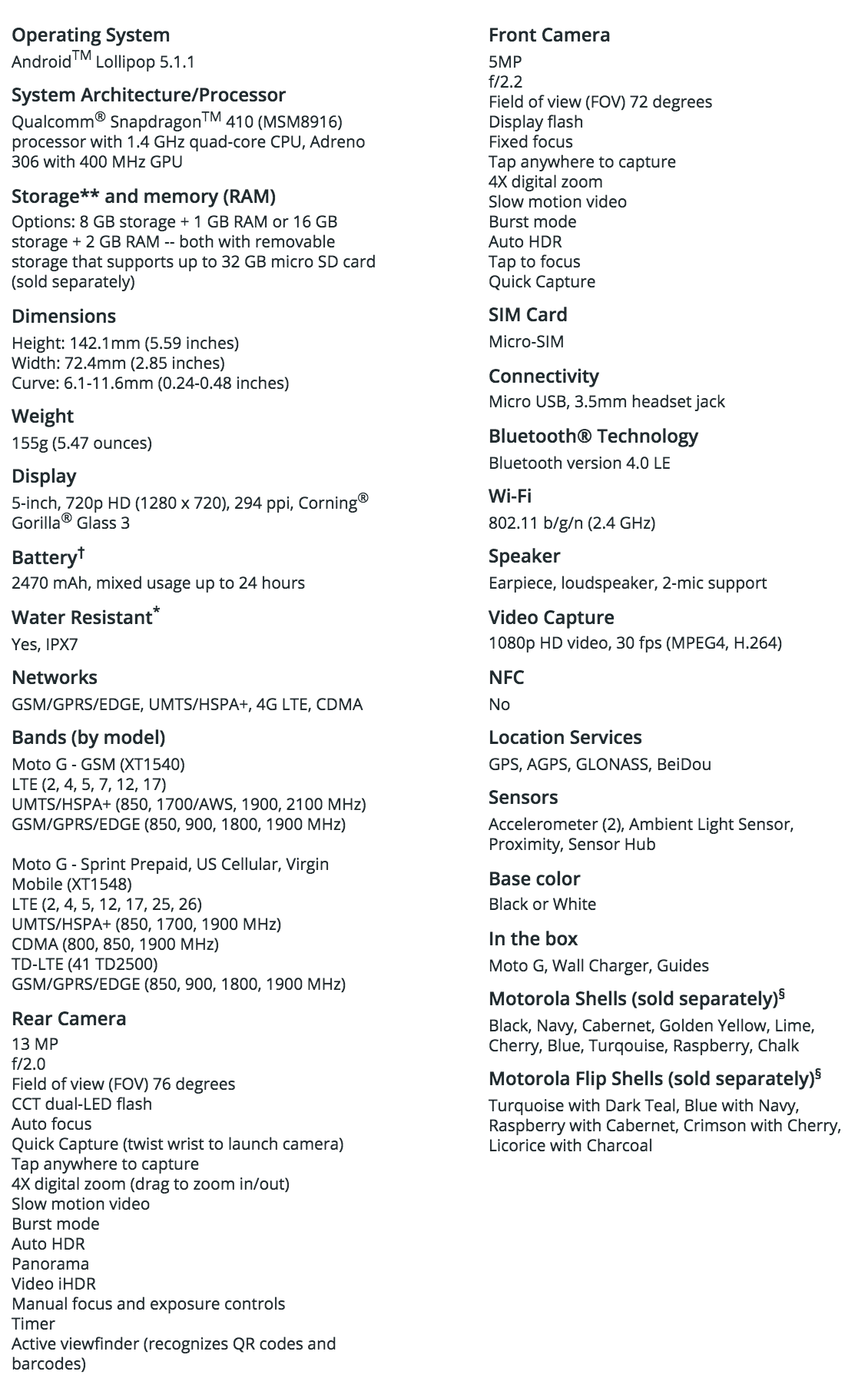 As I previously stated, I think that the Moto G is a great second phone candidate. For those of you who are heavily into phones, and want the latest and greatest, then the Moto G is obviously not in contention. It does, however, excel is as a second phone. It’s also good enough if you’re someone who doesn’t desire the latest and greatest, and can get by with just a decent phone from a performance perspective.

This is especially true since that Moto G comes with amenities like 4G LTE for faster download speeds, a 13 megapixel rear-facing shooter, and expandable storage via microSD.

It should be mentioned that the rear-facing camera uses the same sensor as the Nexus 6, which is a significant improvement over the last generation Moto G. 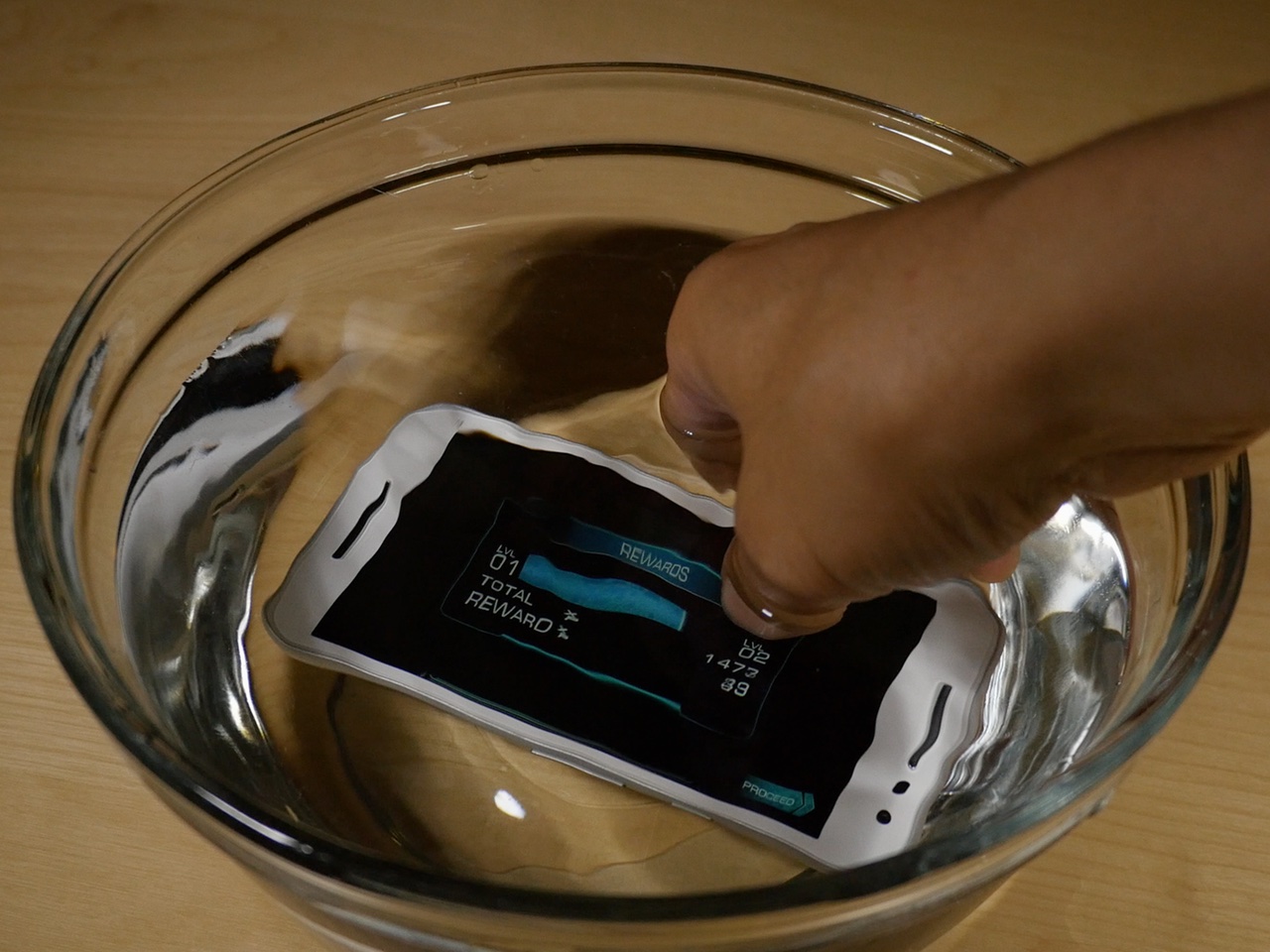 One of the great features about the Moto G is its durability and the fact that it’s IPX7-rated for protection against splashes and shallow water immersion. This makes the Moto G a good candidate for people working in precarious situations, and as a portable gaming device for the kids.

As you’ll see from the benchmarks below, the Snapdragon 410 processor clocked at 1.4 Ghz, doesn’t do the phone any favors with regard to performance. 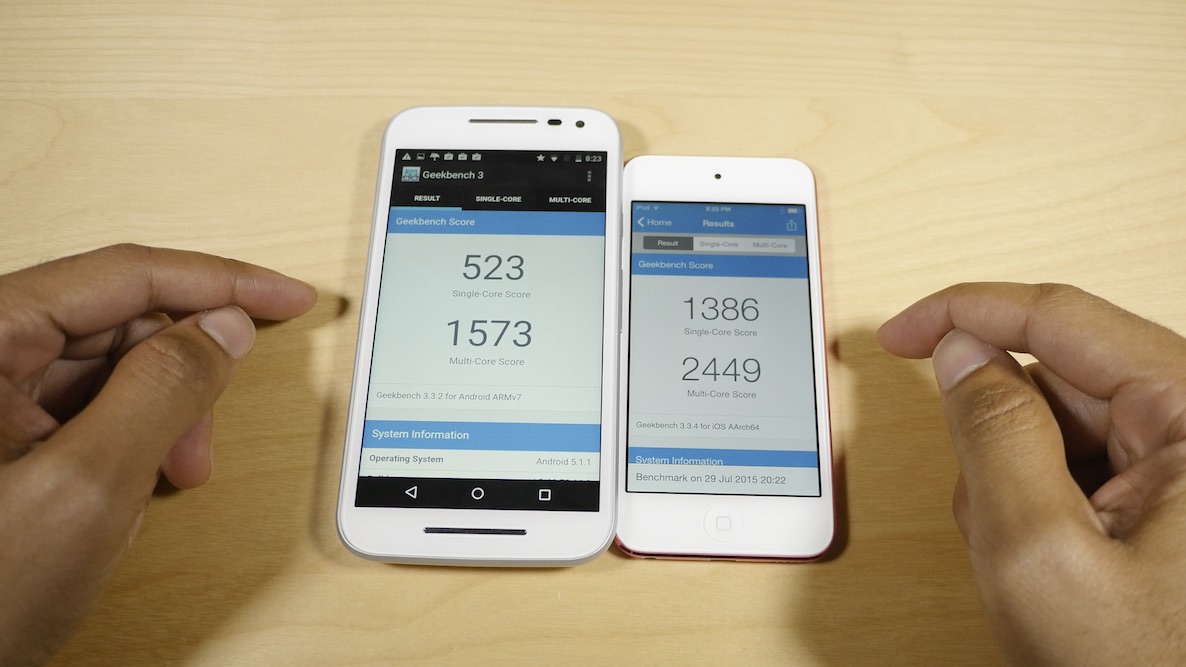 The benchmarks were so abysmal when compared to the iPod touch 6th-gen, that I didn’t even bother comparing it to an iPhone 6, 6 Plus, or even an iPhone 5s. I think it’s safe to say that this device is clearly in the iPhone 4S/iPhone 5 spectrum as far as performance is concerned.

If you’re not used to high frame-rates in games, then it may be something that isn’t as noticeable to the average person. Compared side-by-side, it’s obvious that the frame-rates on the iPod touch 6th-gen—a device that’s only $20 more than the Moto G 3rd-gen—are much silkier and consistent. 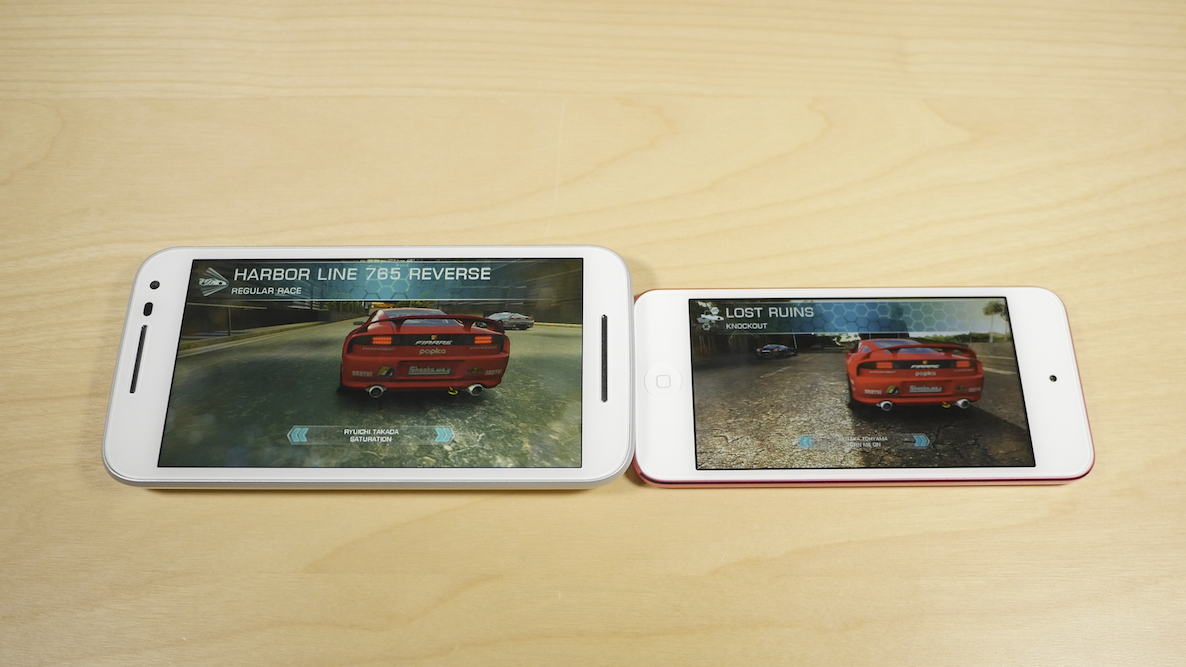 Interestingly though, I found that loading times for games didn’t differ much between the two devices, and in some games—Minecraft for instance—the Moto G actually loads faster.

The Moto G has several notable shortcomings. For starters, it just doesn’t have the power of a flagship device, but that’s to be expected at its price point.

To save costs, Motorola left out other key features like NFC, faster charging, wireless charging, and a higher resolution screen. Motorola pretty much skimped on everything it could skimp on while still coming away with a compelling budget device. 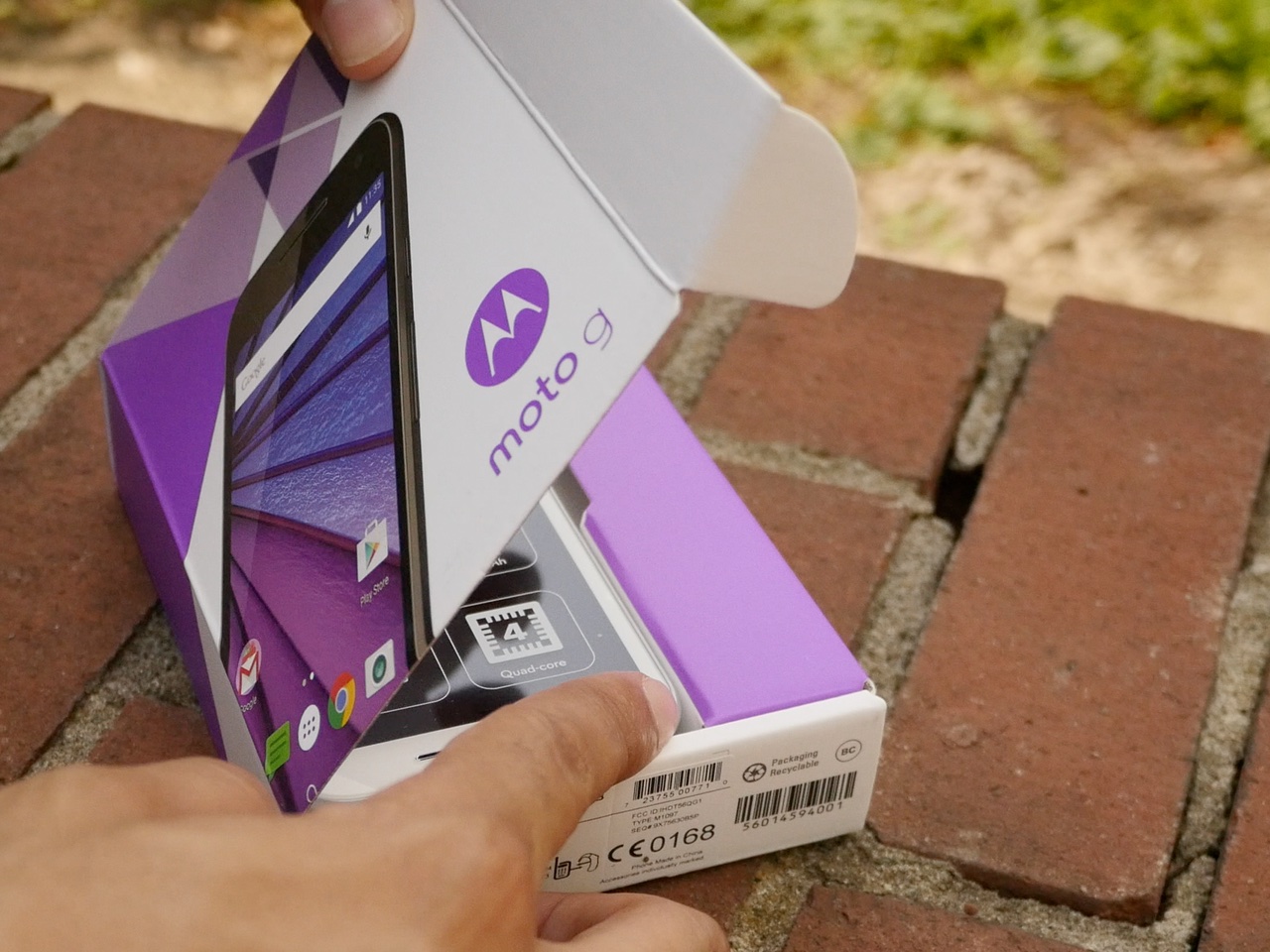 The camera, while using the same sensor in the Nexus 6, and thus much improved over the Moto G 2nd-gen, lacks OIS, which results in shaky footage. I found that the camera also doesn’t perform nearly as well in low-light situations as the iPhone 5s or even the iPod touch 6th-gen.

Specs-wise, the Moto G is a bit anemic when compared to even some mid-range devices. Despite this, though, Motorola was able to create a device that works great as a second phone, or as an Android test phone. It’s even okay as a primary device for someone who isn’t a big time gamer, multitasker, or general phone enthusiast.

Despite its technical shortcomings, the Moto G runs pretty well. This can be partly attributed to Motorola’s stance on bloatware. This is as close as you can get to a pure Android device without actually buying a Nexus phone. The few improvements that Motorola does put into play, like Moto Display for intelligent Lock screen notifications, actually make sense and work well. 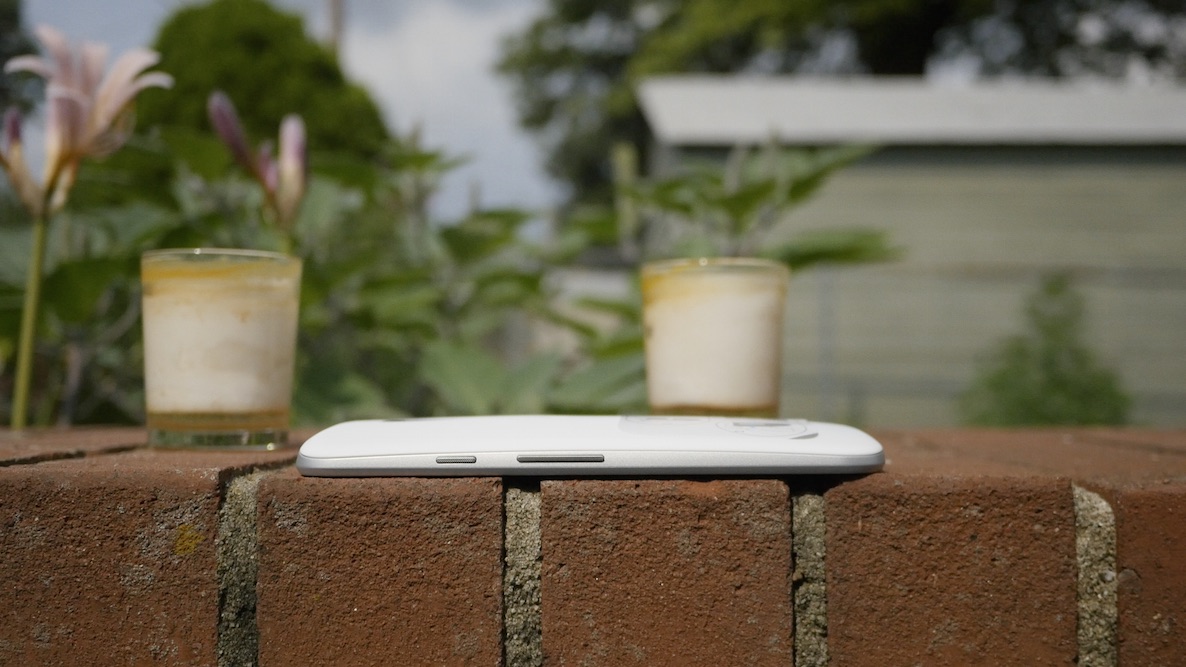 The Moto G even works well as a gaming device or a general Internet device, though, as you saw from the benchmarks, you may be better off opting for an iPod touch if gaming is at the top of your list.

The bottom line is that at $179.99, the Moto G is one of the cheapest and easiest ways to experience Android Lollipop the way it was meant to be experienced. It’s in no way a competitor to the iPhone, but it makes a good complimentary device for those willing to step out of their comfort zone.

See my takes on: