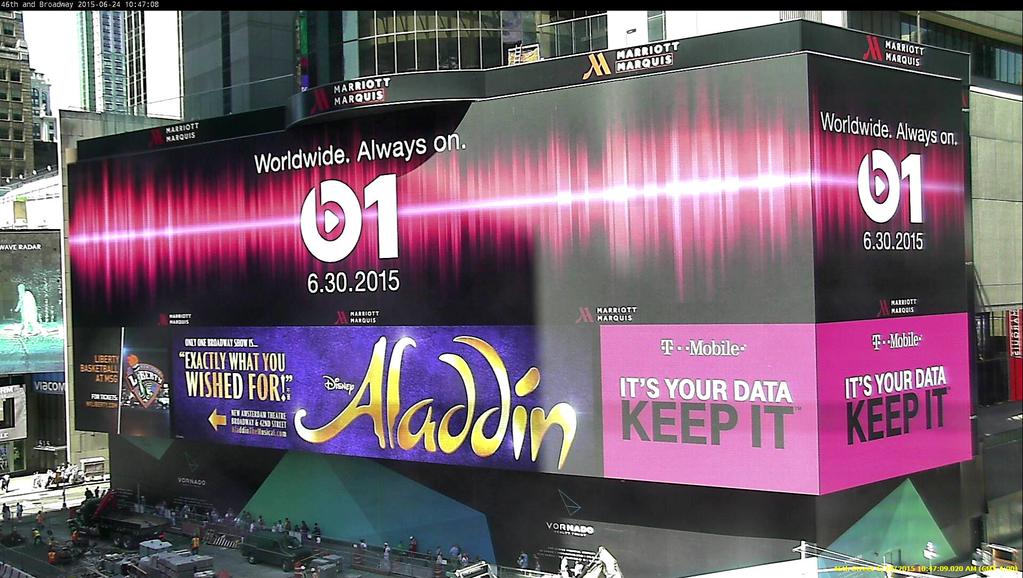 Often referred to as The Crossroads of the World, New York City’s Time Square is always brightly adorned with billboards and advertisements from the world’s top brands. With less than a week until June 30 Apple Music launch, the iPhone maker is now advertising Beats 1 with a massive billboard.

It’s dominated by enormous Beats 1 promotional graphics accompanied by the “Worldwide. Always on” tagline and the 6.30.2015 launch date. Interestingly enough, the Apple logo is nowhere to be seen on the advertisement, perhaps indicating the Cupertino firm might be counting on Beats’ brand power to push the upcoming radio service into public consciousness.

A 24/7 Internet radio hosted by celebrity DJs, Beats 1 is part of Apple Music, a $9.99 per month music-streaming service debuting on the iPhone, iPad, iPod and Mac and Windows PCs next Tuesday, with an Android app and Apple TV compatibility due this fall.

The photograph of the billboard seen top of post was shared on Twitter by Zane Lowe, one of the three celebrity DJs that will host Beats 1 radio. Zane Lowe will be DJ-ing on Beats 1 from Los Angeles, with other disk jockeys including Ebro Darden in New York and Julie Adenoma in London providing real-time programming as well.

Apple Music is priced at $9.99 per month, or $14.99 for a family of six, and includes a free three-month trial versus Spotify’s one-month free trial. The subscription service features unlimited streaming with offline playback, human playlist curation, Beats 1 always-on radio, a social feature for artists and more.

If you’re near Times Square, feel free to send us your photos of Apple’s massive ad.