Reading through your comments about Apple Music, the iPhone maker’s new $10 per month music-streaming service with 24/7 radio and other features, one crucial question seems to preoccupy the collective hearts and minds of those contemplating switching from Spotify: offline playback.

Thankfully, Apple’s confirmed that its new streaming service will indeed permit music lovers to save their playlists and songs for offline playback, just like Spotify does.

“As an Apple Music member you can add anything from the Apple Music library — a song, an album or a video — to your collection,” according to a statement by an Apple representative issue to Re/code.

“And that’s just the warm-up act. From there you can create the perfect playlist from anything you’ve added. You can save it for offline listening and take it on the road.”

This is great news!

The new Music section on Apple’s website confirms this as well. 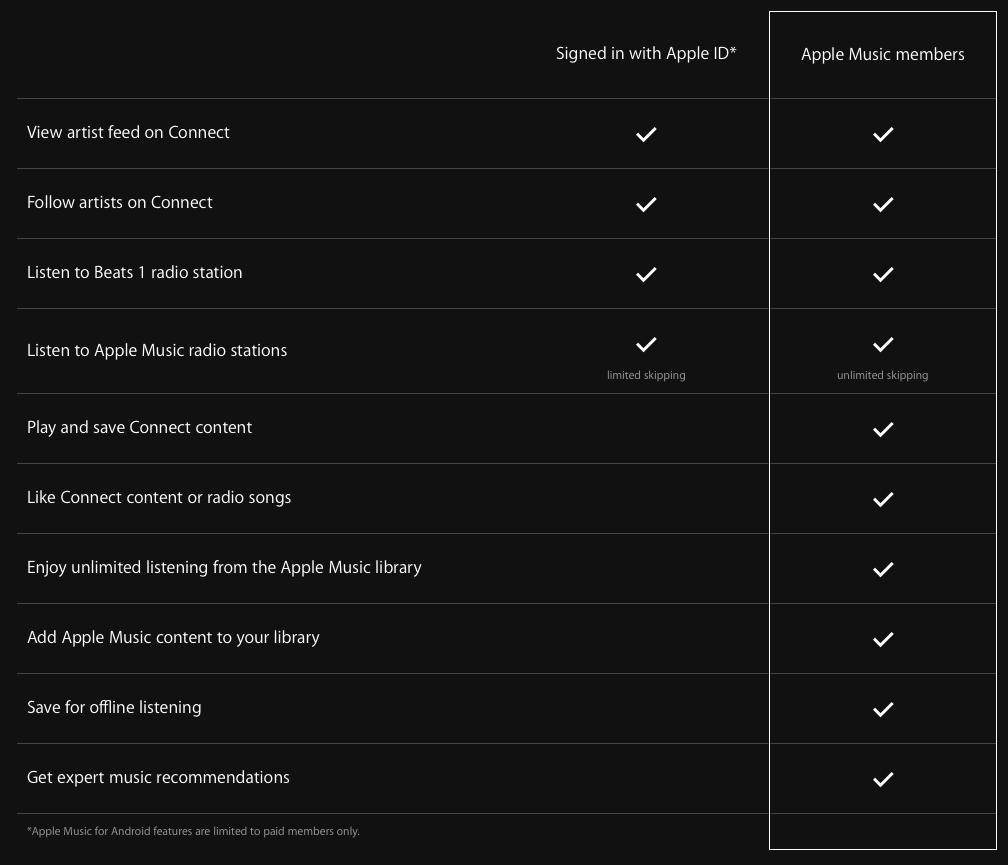 From the looks of this chart, it doesn’t seem the free trial will be available on Android, the reason being that it requires signing up with an Apple ID so that credit cards on file can be charged after three months.

Apple probably doesn’t want to implement Apple ID support in an Android app, and my best bet is that they’re doing so for security reasons.

“Apple Music for Android features are limited to paid members only,” reads the fine print.

Be that as it may, I’m very relieved by offline playback as any lack of it could prompt me to stick with Spotify.

As things stand now, I’m definitively going to take advantage of the free three-month trial before kissing Spotify good-bye for good. If Apple’s service turns out to be a dud, I’ll just continue using Spotify.

It’s a good thing that Apple Music will be available on Android via a dedicated app. But there’s one area where Spotify still has the upper hand over Apple Music: rich third-party support.

Spotify provides an API for developers so apps like Algoriddim’s djay Pro for iPhone, iPad and Mac let you mix Spotify tracks straight from the cloud, which is pretty darn awesome in my book.

Additionally, the popular Swedish music service is available in far more places than Apple Music, including gaming consoles, wireless speakers, dedicated MP3 players and a host of other audio accessories.

Whether or not Apple chooses to open up its fledgling music service to app and device makers remains to be seen but the company would be wise to do so because for all the seamlessness and vertical integration of its ecosystem, we now live in a multi-platform, multi-screen world, wouldn’t you agree?