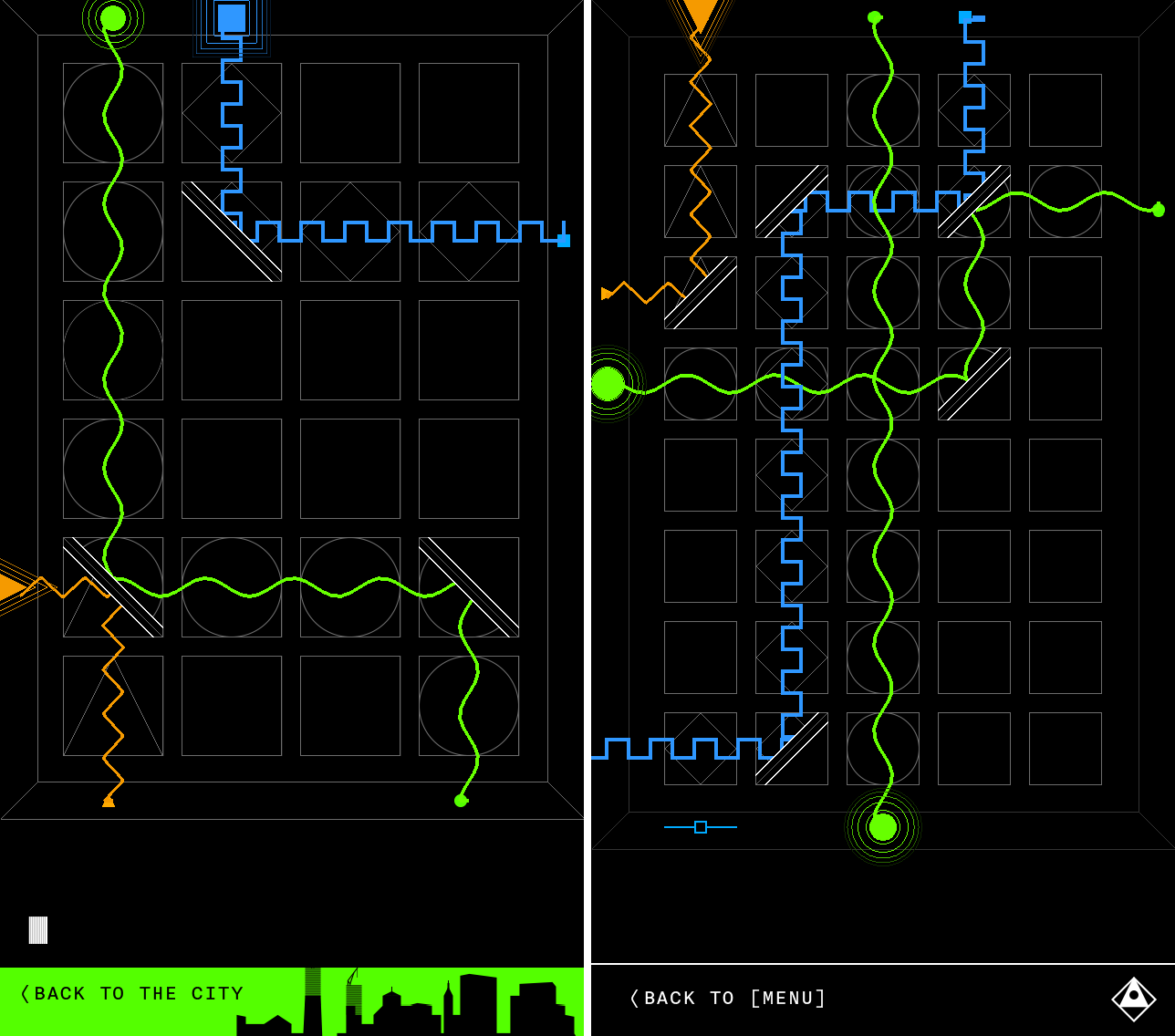 In this digital age, we are faced with issues about privacy and security. In no point in the history of the United States has more of our personal information been publically available than in the 21st century. What if the NSA sought out the help of everyday citizens to keep watch over each other?

TouchTone is a complex puzzle game with an underlying story that hits on such possibilities. How would our private lives look to an outsider? Would things we consider to be innocent look nefarious to our neighbor? We’ve got a hands-on game review of Touch Tone for you.

Although this is a puzzle game, its deep, dark storyline is what makes it stand out in the crowd of puzzle games in the App Store. Your job as a newly recruited citizen NSA agent is to read messages and emails of other U.S. citizens and decide if their communications could implicate them in some criminal activities.

You must solve a number of puzzles in order to unencrypt the messages and unlock new sections. Then, report your findings to your superior for review.

The game looks like something you would see in Tron. The bright, neon lines and stark, black background is reminiscent of 1980s space-themed arcade games. However, this is neither an arcade style game nor set in outer space. So, the juxtaposition of content and style are an interesting combination. 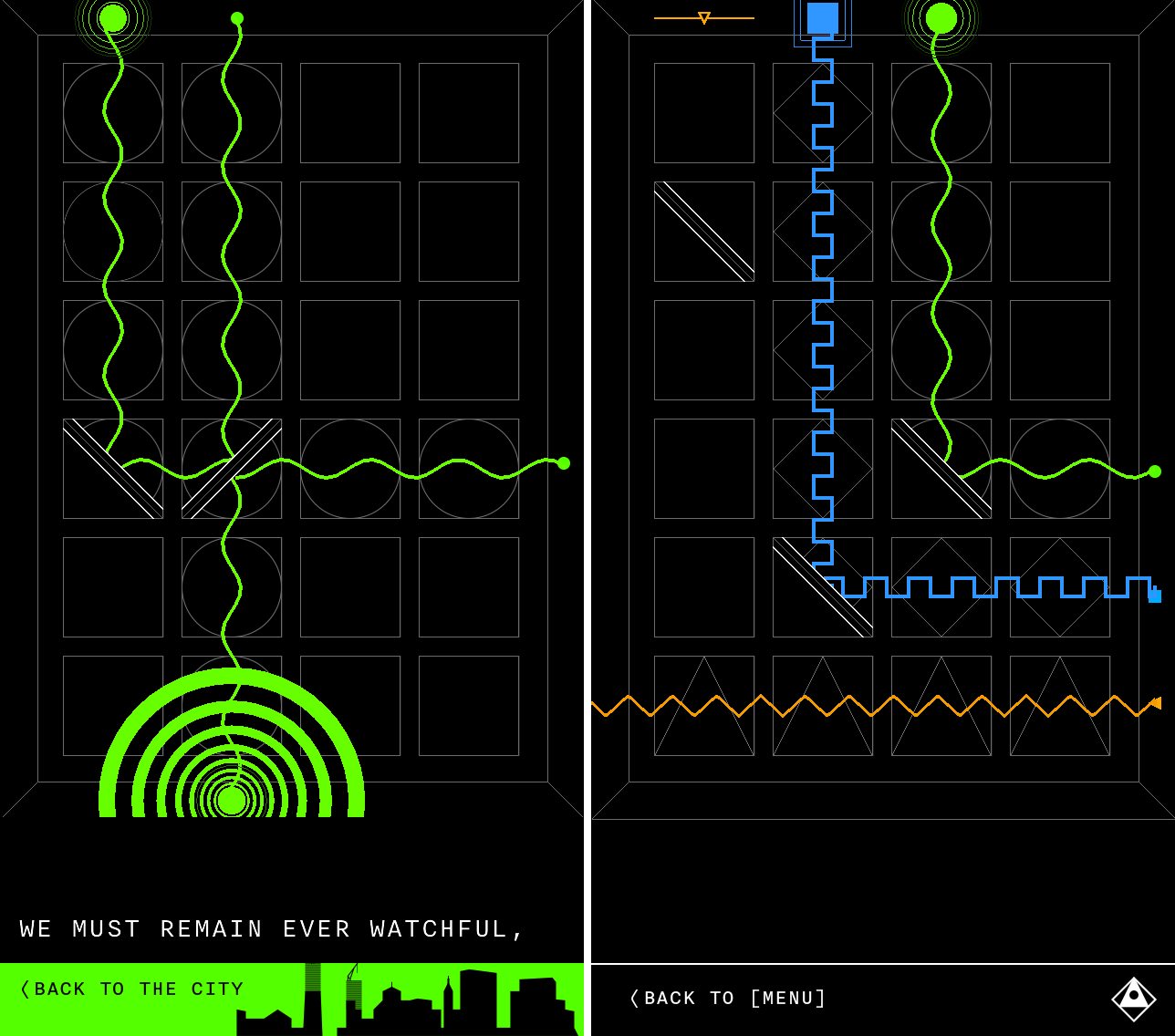 The game is two-fold. One part is to solve puzzles. The other is to decipher messages and report your findings. Although the second part is less of a game and more of a storyline added to the game for entertainment.

Puzzles consist of a number of lines that begin at one point and must connect to a receptor. It is very similar to mirror and light style puzzle games with a few additional elements to keep you interested.

Players must reflect lines from one angle to another by moving columns or rows on a grid. You can move a row left or right and a column up or down. It is important to remember that all other tiles in a row or column will move at the same time. So, if you have a reflective object lined up, you will lose it if you move its whole row.

Once all lines are connected to their receptor, your puzzle is solved. After completing a few puzzles, you will encrypt a message. In the tutorial section, messages are different. Some will refer to ordering books that are considered dangerous on the government watch list. Others will hint at drug use, which is supposed to throw up a red flag. You decide whether the information is pertinent or non-pertinent.

After the tutorial, players are asked to follow a specific person and report information that is considered pertinent. It is at this point that I feel I should address some concerns I read in the App Store user review section.

The storyline in the first scenario (The Valley) asks that players follow a man named Samir Jilani. The reason given is that he is from Iran and is a Muslim, therefore all of his communications are considered pertinent. Some players have considered this game to include racist and offensive content because of the way information is presented. In fact, it is the opposite.

The game’s co-creator, Mike Boxleiter told Gaming Insiders in an interview that the story is written through the lens of the NSA.

“What if everything we said online was public, what if all our supposedly private communications were being watched by somebody looking for our faults, looking to expose and leverage our weaknesses against us?” he said. “How much power would that somebody have, and should anybody have that kind of power? I wanted the game to ask those questions, and I tried to leave it up to players to answer them.”

Keep this in mind when playing the game. 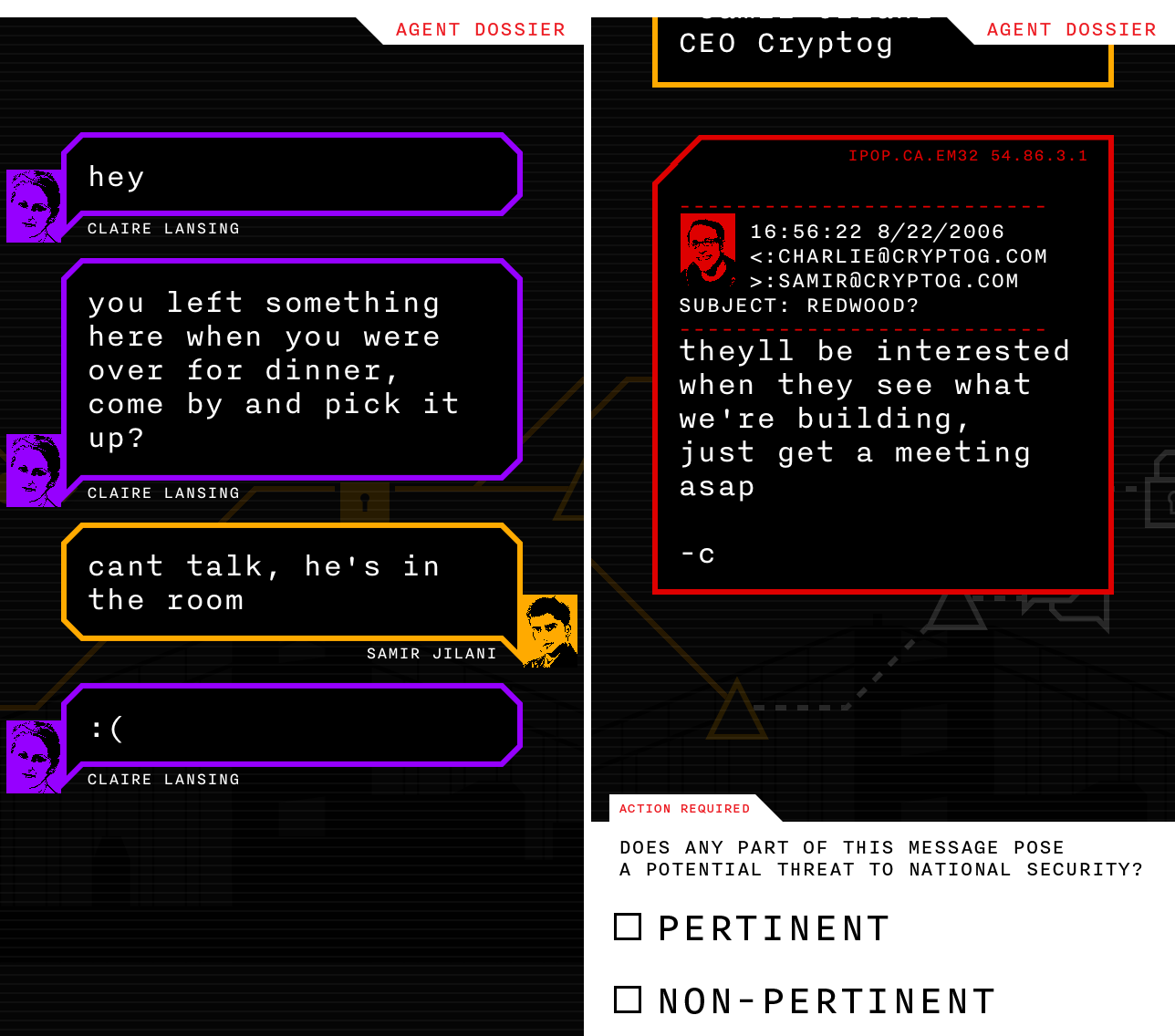 The puzzles offer just the right amount of a challenge to feel like you are getting a brain workout without getting a brain stress out. At times, they seem too difficult right up until you accidentally solve them.

I also found the storyline to be riveting. One of the reasons I kept solving puzzles was to unlock new messages and see what the government had to say about it. It was like reading a conspiracy short story.

I really wish there were a hint system. I actually had to cheat and look up a walkthrough on one level. I know it defeats the challenge, but I’d love to have some help in the right direction every once in a while.

TouchTone costs $2.99, which is a bit pricier than the average puzzle game. This game is well designed and offers a lot of interesting content, which makes it worth the money. The replay value isn’t particularly high, since there is no real reason to solve a puzzle a second time. However, the content makes it valuable when you consider it is as good as a sci-fi movie or psychological thriller book.

Even though the game is a bit on the high end price wise, it is really good and a lot of fun. I know I will spend a lot of time over the next few days trying to complete the entire game, just to find out what happens to the citizens that are being tracked by the government. This game is available on the iPhone, iPad, and iPod touch. Download it in the App Store today.

God of Light is a similar puzzle game. Mirror and Reflections has a similar look.

What do you think of this mirror and light style puzzle game? Let us know in the comments below.