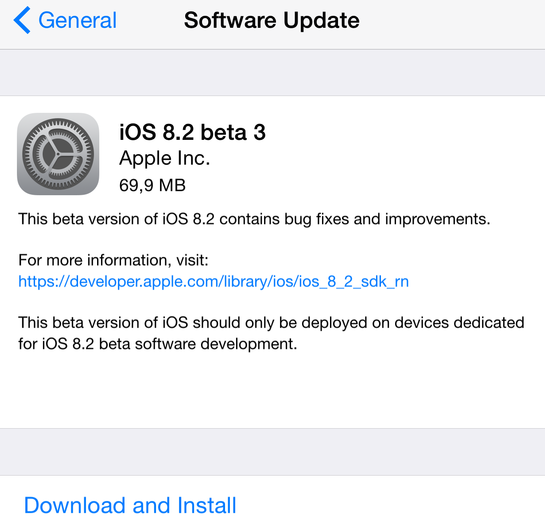 Apple has seeded the third iOS 8.2 beta to developers this morning. The release comes a week after the second iOS 8.2 beta, and follows last week’s public launch of iOS 8.1.2, which brought about a fix for disappearing ringtones.

The new 8.2 beta can be downloaded either over-the-air, or via Apple’s developer portal, by all registered iOS developers. It’s unknown what new features the firmware will bring, but it will enable support for Apple’s WatchKit.

It’s also unclear when iOS 8.2 will be rolled out to the public. It’s rumored that we’ll see 8.1.3 released at some point with bug fixes, and much of Apple’s dev center is about to shutdown for the holidays, so it’s likely still months away.

At any rate, we’re installing the beta now and will pass along any notable changes. If you see something we’ve missed, feel free to email us at tips@idownloadblog.com or leave a note in the comments section below regarding the change.