In late-July, a claimed iPhone 6 circuit board leaked on the web. As it lacked the actual chips (it only showed the pin layout), it left watchers guessing as to whether the handset might include much-rumored NFC capability for a rumored Apple-branded mobile payment service.

Today, a photo purportedly showing a fully assembled logic board of the iPhone 6 has surfaced. Published by a Taiwanese blog, it reveals several semiconductor components such as a Toshiba flash chip and a Wi-Fi module…

As MacRumors points out, the photo reposted by Apple.club.tw [Google Translate] doesn’t show the most crucial component — an Apple-designed A8 processor, rumored to be clocked at 2GHz per core.

While several physical features such as the nano-SIM slot, a number of connectors for flex cable components, and a flash storage chip that appears to be from Toshiba are visible in the somewhat blurry photo, the most interesting components of the board unfortunately remain hidden under electromagnetic shielding.

A silver component at the bottom of the board on the left is almost certainly the Wi-Fi module, although no identifiable markings can be seen.

It’s safe to assume that the A8 processor is hidden beneath the shielding on the right.

And here’s the claimed photo: 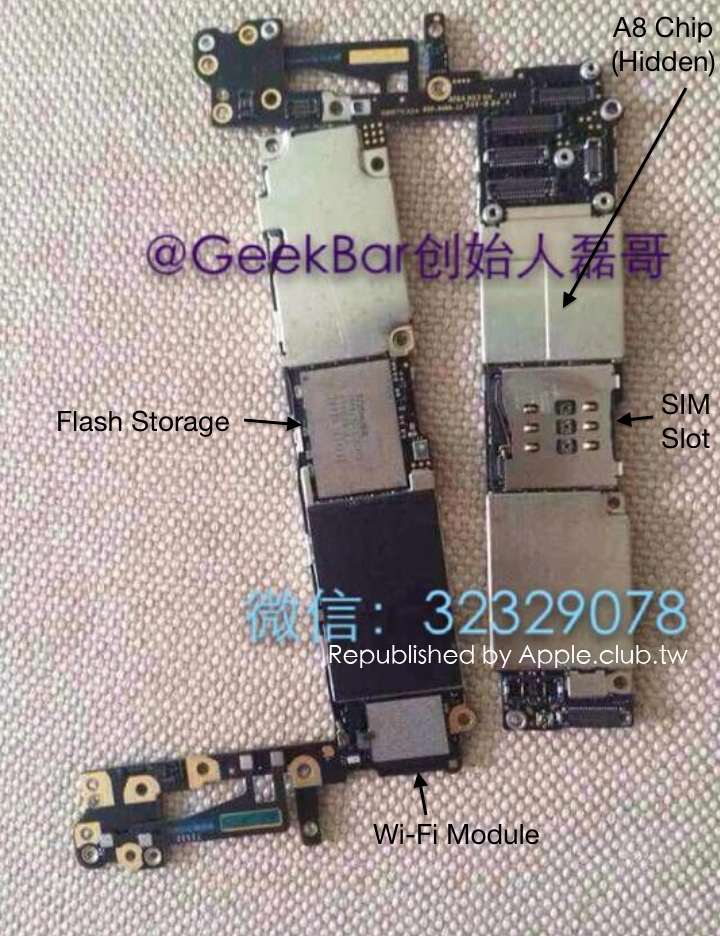 Another photo appears to show an iPhone 6 flex cable that matches up nicely to a photo of the front panel display assembly that was posted just yesterday. 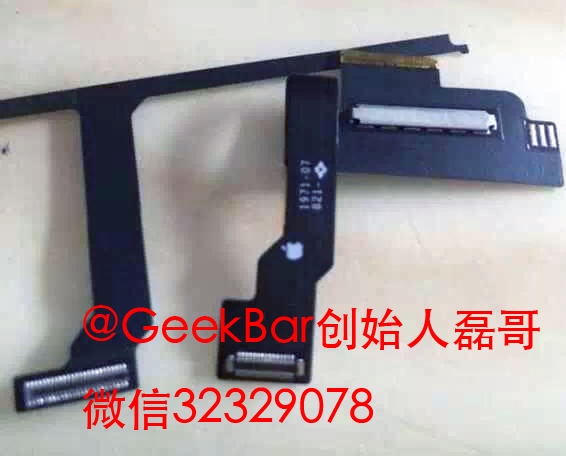 Both 4.7 and 5.5-inch iPhone 6 models should be announced at a media event reportedly scheduled for September 9. Most of the rumors floating around center on a thinner, metal-clad Unibody enclosure, a faster A8 chip, a Sony-made 13-megapixel camera with optical image stabilization, several new sensors and more.

Whether or not the next iPhone will include NFC remains anyone’s guess.

If you ask Apple’s marketing boss Phil Schiller (who just took the Ice Bucket Challenge to help fight against ALS), it’s not clear that NFC is the solution to any current problem.

Apple’s many patents may offer some additional clues in the form of NFC-powered digital media gifting between iOS devices, wireless data exchange over NFC, proximity-based data transfers, the connected home and an iWallet.