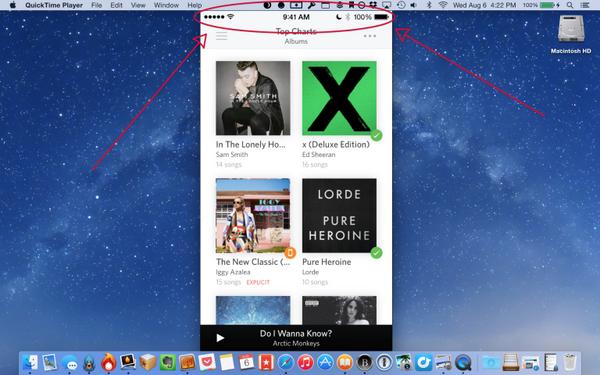 The vast majority of Apple bloggers who grab screenshots of iPhone and iPad applications don’t seem to be ashamed by the low or no cellular signal strength showing right in their status bar, or incomplete Wi-Fi or – worse of all – low battery.

And who could blame them?

Touching up the images to have the status bar show full cellular/Wi-Fi signal and 100 percent battery takes time and a great deal of effort to get it right.

I’ve seen folks like MacStories editor Federico Viticci obsess over the issue and even write scripts and devise complex workflows in order to correct the messed up status bar on their iOS screenshots. Having been constantly pressed for time, I’m not that particular about my screenshots.

Luckily, QuickTime in Yosemite includes a nifty little feature which automatically cleans up the status bar when capturing an iOS device’s screen, so your screencasts look professional…

For those unaware, when OS X Yosemite launches this Fall, people will be able to record a video of whatever is on their iOS 8 device’s screen using QuickTime.

You’ll simply connect your iPhone, iPod touch or iPad running iOS 8 to a Mac via a Lightning cable and fire up QuickTime – no pricey A/V adapters or HDMI capture cards needed.

Apple’s maniacal attention to detail now manifests itself in QuickTime’s automatic cleaning up and prettifying of the iOS status bar on your screencasts, as first noticed by Daniel Celeste over at AppAdvice.

While recording video of the Rdio app just for the sake of testing out the feature, I noticed that my iPhone’s status bar was acting strange. All of the signal dots were full, I was apparently on Wi-Fi even though I had it turned off, it was somehow 9:41 a.m. in the afternoon, and my battery had magically charged itself.

Man, they even bother doing 9:41AM! How’s this for attention to detail?

A quick side-note: if you’ve been wondering why official photos of Apple products show the same time (you guessed right, 9:41AM), it’s because Steve Jobs started unveiling the original iPhone at 9:41.

Again, those wishing to check out this sweet feature would need the latest beta build of Yosemite and of course an iOS device running a beta of iOS 8.

Bloggers who used to routinely embarrass themselves posting iOS screenshots showing no cellular service, low Wi-Fi signal and 5 percent battery in the status bar will now sleep better knowing that Yosemite will take care of their first-world problem.

I think Apple has implemented this feature with developers in mind.

Come this Fall, developers will be able to upload video previews of their apps on the App Store. I really can’t think of any reason why any developer or a fellow blogger would want their screencasts to leave an impression of sloppiness by showing a low battery icon or strange times like 3:27AM.

If only Apple built this into iOS 8 so that capturing a screenshot directly on an iOS device would clean up the status bar, too.

See also: how to record your OS X screen on the Mac using QuickTime.