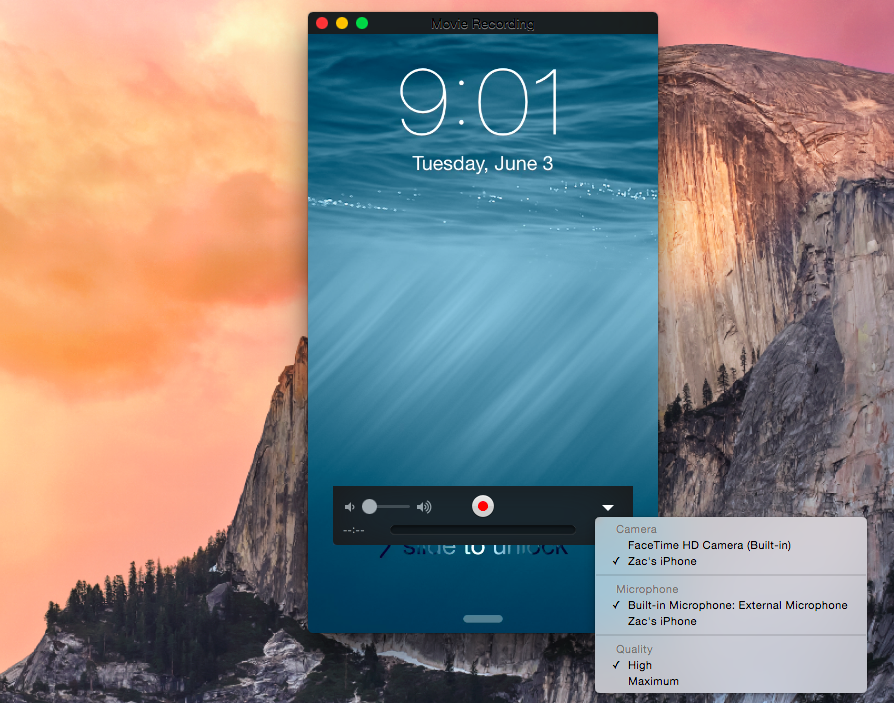 Capturing a real-time screencast of apps and games running on your iPhone, iPod touch or iPad used to require juggling with various devices/cables.

As our own Jeff Benjamin would explain, a typical solution would involve using a pro camcorder to physically record the screen of an iOS device and taking advantage of one of Lightning digital A/V adapters to feed live video from your iOS device to a computer or a specialized video capture device.

Starting this Fall, iOS 8 and OS X Yosemite will greatly simplify the process by allowing you to capture a screencast by connecting an iPhone, iPod touch or iPad to a computer using a Lightning cable, no A/V adapters or HDMI capture cards needed whatsoever…

You just hook up an iOS 8 device to a computer using a Lightning cable and it will show up as a video input source in QuickTime. You can then use QuickTime to capture anything you’re doing on-screen and store it as a video file to your Mac.

With iOS 8 and OS X Yosemite, you can capture real-time footage of your app directly off your iPhone, iPad, or iPod touch.

Just connect your device to your Mac using the Lightning connector and it will be automatically available as a video camera.

Basically, App Previews stand for device-captured promotional footage “showcasing what’s great about your app to help users decide if it’s right for them”.

Developers can start uploading their App Previews to iTunes Connect this Fall.

Just like screenshots, Apple will review these videos and include a single App Preview per each app, alongside screenshots in the App Store on iOS 8 or later.

• Just like screenshots, each App Preview is device specific.
• Submitting or viewing App Previews requires an iPhone or iPod touch with a 4 inch Retina display or iPad.
• You may only submit a single set of App Previews designed for iPhone, iPod touch, and iPad against one language localization. App Previews will appear in all countries where your app is available.

It’s going to be a killer feature for games makers, I’m sure.

If you’re jailbroken, there are jailbreak tweaks specifically dedicated to recording a live iOS device screencast via AirPlay Mirroring.