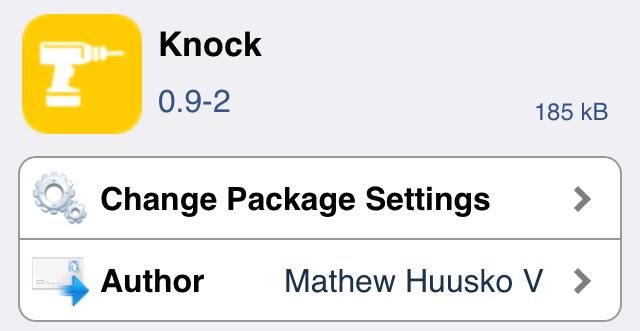 The LG-inspired KnockOn feature seems to be a big hit amongst the jailbreak community. We’ve already seen Elias Limneos’ KnockOn inspired tweak called SmartTap, and now we have Knock.

Knock is an Activator add-on that adds two new gestures to the mix: the ability to knock on (hard tap) the sides of the iPhone or the front and back of the iPhone. Knock uses the device’s accelerometer to detect knocks, and a lot of work has been put into its development to prevent false positives. Have a look at our video demonstration for more details.

After installing Knock, go to the Activator settings panel and you’ll see two the new gestures to assign actions to.

I found that, while a lot of diligence was placed into eliminating false positives, the gestures still suffer from a lot of them. For example, when sitting my phone down on the soft bed, it caused the front/back gesture to be invoked and launch the Camera shutter, which is the action that I have assigned.

With that said, I’m still impressed that the developer was able to isolate the side events from the front/back events. I’m sure that creating this add-on took a lot of work and testing to get it to the point where it is. Perhaps some sensitivity settings can be added to a future Knock update to help fine tune its response to device movement.

As it stands, it’ll probably be hard to use this on a daily driver without being interrupted by a lot of unintentional actions. If you’d like to try out Knock for yourself, then go to the BigBoss repo on Cydia and download it today for $0.99. Once you do, please share some of the use scenarios employed, and share your overall experience with the release in the comments.