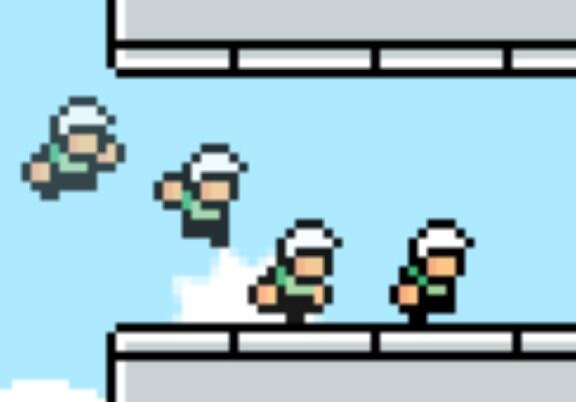 We haven’t heard much from Flappy Bird creator Dong Nguyen since he removed his smash-hit game Flappy Bird from the App Store just over three months ago. After tweeting that the popularity of the game was ruining his life, the Vietnamese developer went quiet for over a month. Since that time, the App Store has been bombarded with dozens of copycat games such as Flappy Bird: New Season.

Then, just yesterday, Nguyen confirmed that Flappy Bird will be returning to the App Store in August with less addictive gameplay and a new multiplayer mode. Building upon that news, the indie game maker has now announced that he is also working on a brand new game that will involve a character jumping from building to building. He gave a sneak peek of what the game looks like in a recent tweet…

I am making a new game. So people can forget about Flappy Bird for a while. pic.twitter.com/JcUsd7FJvg

The name for this new game has yet to be announced, but it looks like it will be a similar side-scrolling platform game with graphics reminiscent of the original Flappy Bird. Nguyen hopes that the new game will take people’s minds off of Flappy Bird, which accumulated over 50 million downloads before it was pulled from the App Store in early February.

Flappy Bird was seemingly an overnight success on the App Store earlier this year, leading many to question if Nguyen manipulated the rankings with fake downloads and reviews. At one point, Nguyen was making upwards of $50,000 per day off the game in mobile ad revenues. iPhone users that downloaded the game before it was removed can still play the game.

It will be interesting to see if Nguyen’s new game can replicate the success that Flappy Bird enjoyed, or if it was simply a one-hit wonder that has already gone by the wayside. But, no matter what, Nguyen and Flappy Bird have influenced the way App Store developers approach games. Over the last few months, we’ve even seen Angry Birds creator Rovio jump on the bandwagon with its new Retry game.

Are you excited for this new game?