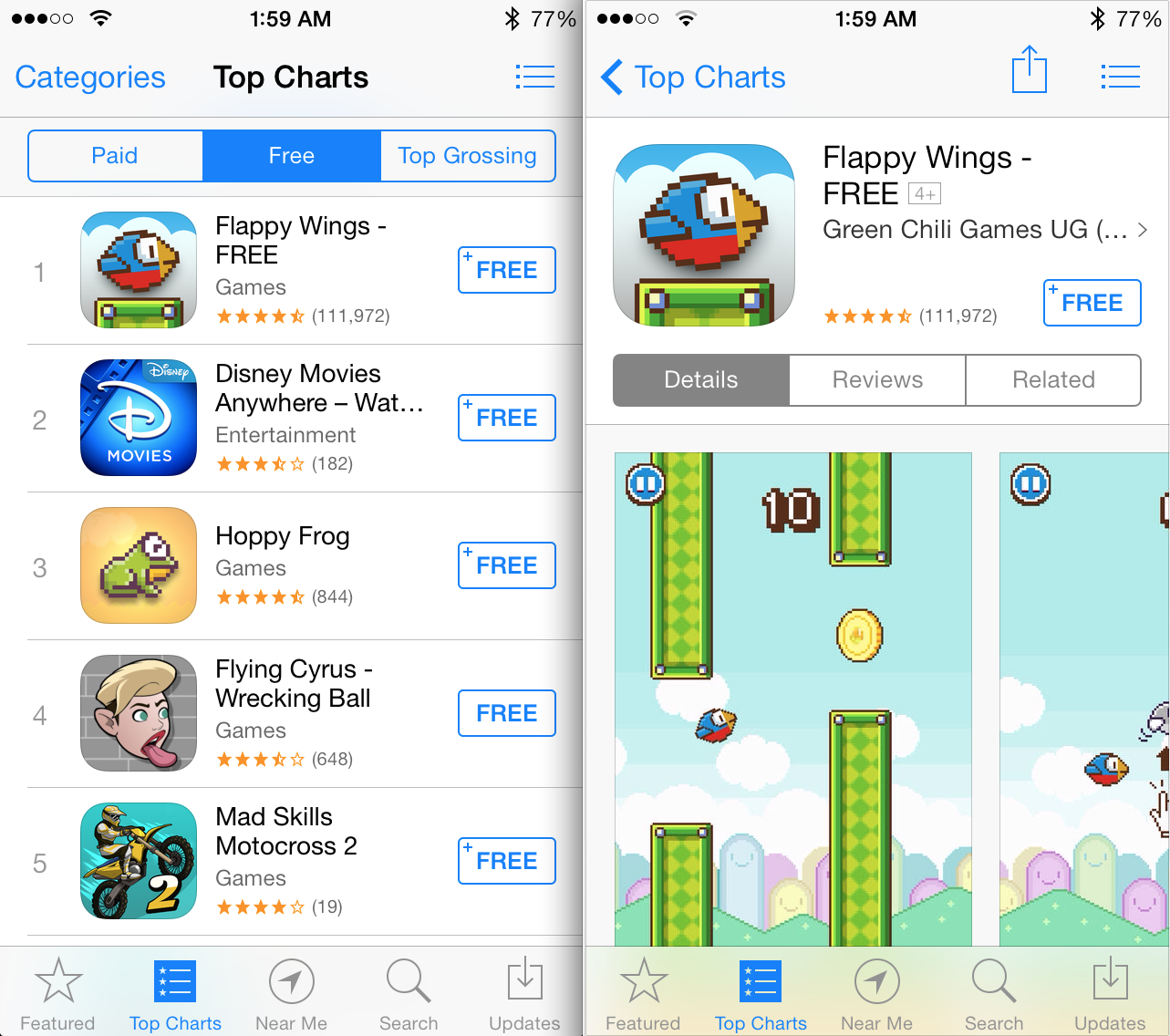 It’s been nearly three weeks since developer Dong Nguyen pulled Flappy Bird from the App Store, but its presence is still very much felt in the Top Charts. It seems every other day another clone of Nguyen’s hit game pops up in the list of the most popular apps.

That’s not too surprising though, considering that according to The Guardian, a big chunk of new iOS games are Flappy Bird clones. How big of a chunk? Well, looking at a group of 300 new games over 24 hours, the outlet says that one-third were FB knockoffs…

In the last 24 hours, just under 300 new iOS games went live on Apple’s App Store. Nearly one third of them were clones of – or heavily inspired by – recent app phenomenon Flappy Bird. […]

Today, when I launched my RSS reader, there were 293 new iOS games released since 5am yesterday morning. After scooting through them, I’ve been able to identify 95 that are obvious Flappy Bird-inspired games.

The vast majority of these will sink without trace, of course. But at the time of writing, four of the top five free iPhone games in the US App Store fall into the Flappy genre – Flappy Wings, Hoppy Frog, Flying Cyrus – Wrecking Ball and Splashy Fish.”

Dredge goes on to list all 95 Bird clones, but we won’t do that here. Just know that most of their names are quite ridiculous, ranging from ‘Flappy Beard Hipster Quest’ to ‘A Floppy Floppy Flying Disk in The Land of 8 Bit Retro Game,’ and everything in between.

What’s even worse is that if 95 of these games made it into the App Store, you have to wonder how many are actually being submitted. Remember that Apple began rejecting ‘Flappy’ apps shortly after the original was pulled to put a stop to the onslaught of copycats.

A handful of these clones are seeing success—5 of them currently occupy spots in the US App Store’s Top 10 list—so I don’t imagine we’ll see the onslaught slow down anytime soon. As for Nguyen, he says he has no plans to bring the original back from the dead.

All things considered, it’s not hard to see why developers have been so anxious to emulate Nguyen’s formula. At the height of its popularity, Flappy Bird was earning more than $50,000 per day in ad revenue. Not bad for a game he was able to make in his spare time.