It’s been almost a year now since Apple unveiled its iBeacon geolocation technology, and I really don’t think it could have hoped for better results. The tech has been implemented in a number of settings including retail and grocery stores, MLB ballparks, and more, and it seems to get more popular every day.

As evidence of that, Texas Instruments pledged its faith in iBeacon today, announcing support for the tech across its Bluetooth low energy portfolio including chips for embedded and automotive applications. The company also launched a new iBeacon-location app that works with its SensorTag development kit…

From the press release (via AppleInsider):

“Restaurants, retailers and even sports stadiums have started using iBeacon technology, but there are many more applications that could benefit from the technology. Everything from asset trackers, retail, building automation systems, automotive and industrial applications, and a wide variety of consumer electronics,” said Oyvind Birkenes, general manager, Wireless Connectivity Solutions, TI. “By providing support for iBeacon technology across our entire Bluetooth low energy portfolio as well as a new SimpleLink SensorTag location app and broadcaster reference design, we are enabling manufacturers to quickly add micro-locationing capabilities to their products.”

The whole SensorTag thing is actually pretty cool. You can buy these things for like $20 a piece, and place them around a building. The Locationing app will provide you with feedback on how close you are to a SensorTag as you approach it, and has the ability to launch a user-specified URL when you’re within range. 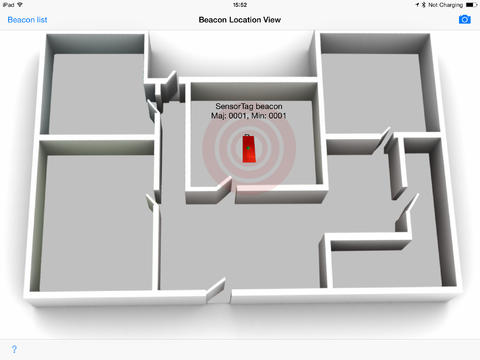 In other iBeacon news, the MLB’s ‘At the Ballpark’ app was updated with support for the tech last month and the 2014 baseball season is now underway. The League had previously said that it had hoped to have iBeacons rolled out in 20 ballparks before Opening Day, but we have yet to hear if that goal was met.