We’re only a few days in, but we’ve already learned a lot from the Apple-Samsung patent trial. With it being a legal proceeding, the public is given access to information it wasn’t previously privi’ed to by way of executive testimonies, corporate emails and other evidence.

In fact, earlier today a particularly interesting email surfaced from former Apple CEO Steve Jobs. The document, which was submitted as evidence in the case, features a list of things Jobs wanted to discuss at the company’s 2010 ‘top 100’ meeting, including the Apple TV…

First of all, what is a ‘Top 100’ meeting? According to former Apple employees, the company hosts a meeting every year featuring its top 100 executives, managers and other staffers. These meetings are extremely secretive, and often include discussion of new products.

Now, about that email. The Verge has posted the entire thing here, in PDF form, but we’re going to be specifically looking at the Apple TV section. Jobs outlined a total of 11 talking points in the message, each with a few bullet points, and the Apple TV is item number 8. 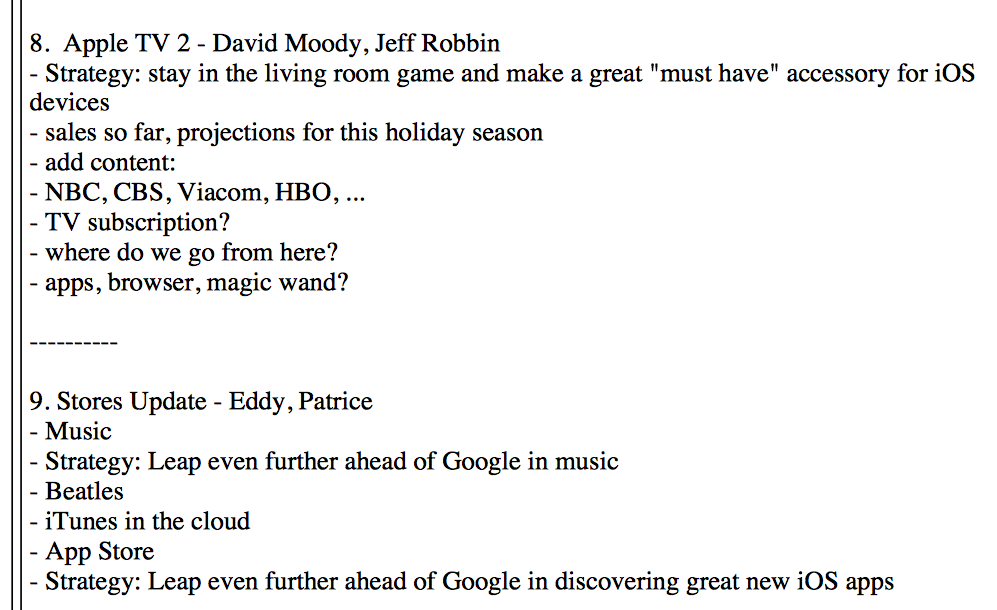 Apple has mentioned the ‘magic wand’ several times in previous patent applications. We’ve covered two filings that specifically talk about it here and here, and both describe the wand as a Wii-like TV remote with built in fingerprint sensors for loading custom user profiles.

So is this so-called ‘wand’ still bouncing around Apple’s R&D labs? It’s tough to say. The company is believed to be working on new TV hardware with support for gaming, and a device like this seems like it’d be perfect. But there has been no mention of it in recent reports.

Anyway, make sure you stay tuned to iDB for more coverage on the Apple-Samsung trial, as we’re likely to see a lot more of these kinds of documents come to light—oh, and some $2 billion in damages hangs in the balance. The trial is expected run for the next 3-4 weeks.