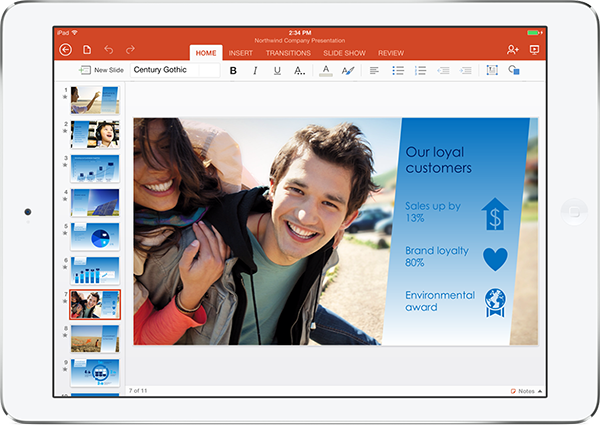 If you visit a Microsoft Store today and bring your iPad with you, Microsoft may give you a free one-year subscription to Office 365, a $99 value.

Following yesterday’s release of Office for iPad with native Excel, Word and PowerPoint applications, the Windows giant’s retail stores are now promoting the apps by giving away a 1-year Office 365 subscription to the first 50 people who turn up at the door and bring in an iPad with them.

If you don’t have the time to visit your nearby Microsoft Store or there’s no store in your area, Amazon is now offering a discounted annual Office 365 subscription for $67…

The deal is valid for three days only, running Friday, March 28 through Sunday, March 30, as first reported by ZDNet. Microsoft’s official Twitter account has tweeted out the promotion, too.

Office 365 is here for iPad. First 50 people to bring in their iPad starting 3/28 will get @Office free for 1 year. http://t.co/ePjfSDdCoY

Although Excel, Word and PowerPoint for iPad are offered as free downloads, you can’t edit or create new documents without an Office 365 subscription. 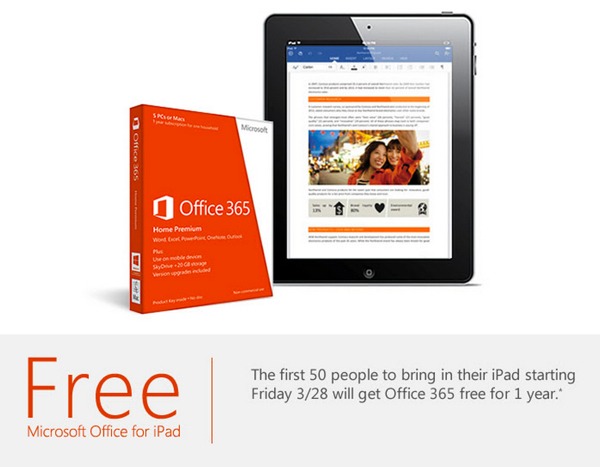 It’s interesting that Microsoft is also selling Office 365 subscriptions within the newly-released iPad apps, with Apple getting its standard 30 percent cut. As there aren’t many Microsoft Stores around, you may not be able to take advantage of this promotion.

But don’t despair – if you’re serious about Microsoft’s productivity suite, you can buy an Office 365 subscription over at Amazon for $67.15 with free shipping, a 33 percent discount that’ll save you $33 in the process.

By the way, Word, Excel and PowerPoint are all topping the App Store’s free downloads, with Word now #6 top grossing app. So much about iPad users not caring about Microsoft Office.

Office 365 subscriptions work on up to five Mac or Windows PCs and mobile devices, without license transferability limitations and including access to all the latest and greatest Office apps like Word, Excel, PowerPoint, Access, Outlook, OneNote and Publisher, with twenty gigabytes of free OneDrive storage and 60 free minutes of Skype calls per month.

Normally, Microsoft will let you transfer the software to another computer that belongs to you, but not more than one time every 90 days, except due to hardware failure, in which case you may transfer sooner.

A more affordable Office 365 Personal subscription will be available in April, limited to just one PC or Mac, plus one tablet, in exchange for $6.99 per month, or $69.99 per year. Note that Microsoft is offering a free 30-day Office 365 trial for those who want to test the full functionality of Office for iPad without purchasing a subscription.

You can download Excel, Word and PowerPoint for iPad free in the App Store.