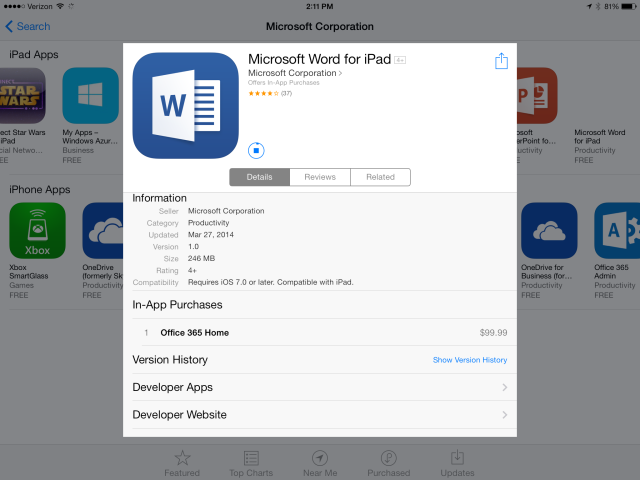 Redmond couldn’t have wished for a better endorsement than this!

So, why are these powerful Silicon Valley executives droning politely on to each other, do you think? And how come Cook is promoting Office for iPad even though the software competes squarely with Apple’s own iWork suite, free with iDevice purchases?

As first discovered by Re/code, Microsoft chose to sell Office 365 subscriptions to Office for iPad users via Apple’s in-app purchase mechanism and hand over 30 percent of that revenue to Apple.

Indeed, Microsoft does offer Office 365 subscriptions within the just-released Word for iPad and the other Office apps and, yes, it is paying the 30 percent cut, Apple confirmed to Re/code. Microsoft declined to comment on the matter.

There’s nothing unusual about this.

Microsoft is simply abiding to the same revenue sharing rules regarding In-App Purchases all of Apple’s registered iOS developers do.

The newsworthiness of this stems from the fact that Microsoft’s actually agreed to Apple’s terms, even more so knowing Apple’s 30 percent cut has been the sticking point for some other developers and publishers on the App Store.

You’ll remember how the two firms locked horns over in-app purchases in Microsoft’s SkyDrive cloud storage client for the iPhone and iPad.

As Apple didn’t relent, Microsoft eventually removed the option to purchase additional storage within the app rather than agree to share 30 percent of that revenue with Apple (Dropbpox doesn’t have such religious issues, however).

The iPhone maker also issued the following statement regarding Office for iPad’s arrival.

We’re excited that Office is coming to iPad — now part of the more than 500,000 apps designed specifically for iPad. iPad has defined a new category of mobile computing and productivity and transformed the way the world works.

Office for iPad joins an incredible lineup of productivity apps like iWork, Evernote and Paper by FiftyThree, that users can choose from to inspire them to do more with this powerful device.

An Office 365 subscription is required to edit and create documents on the iPad. 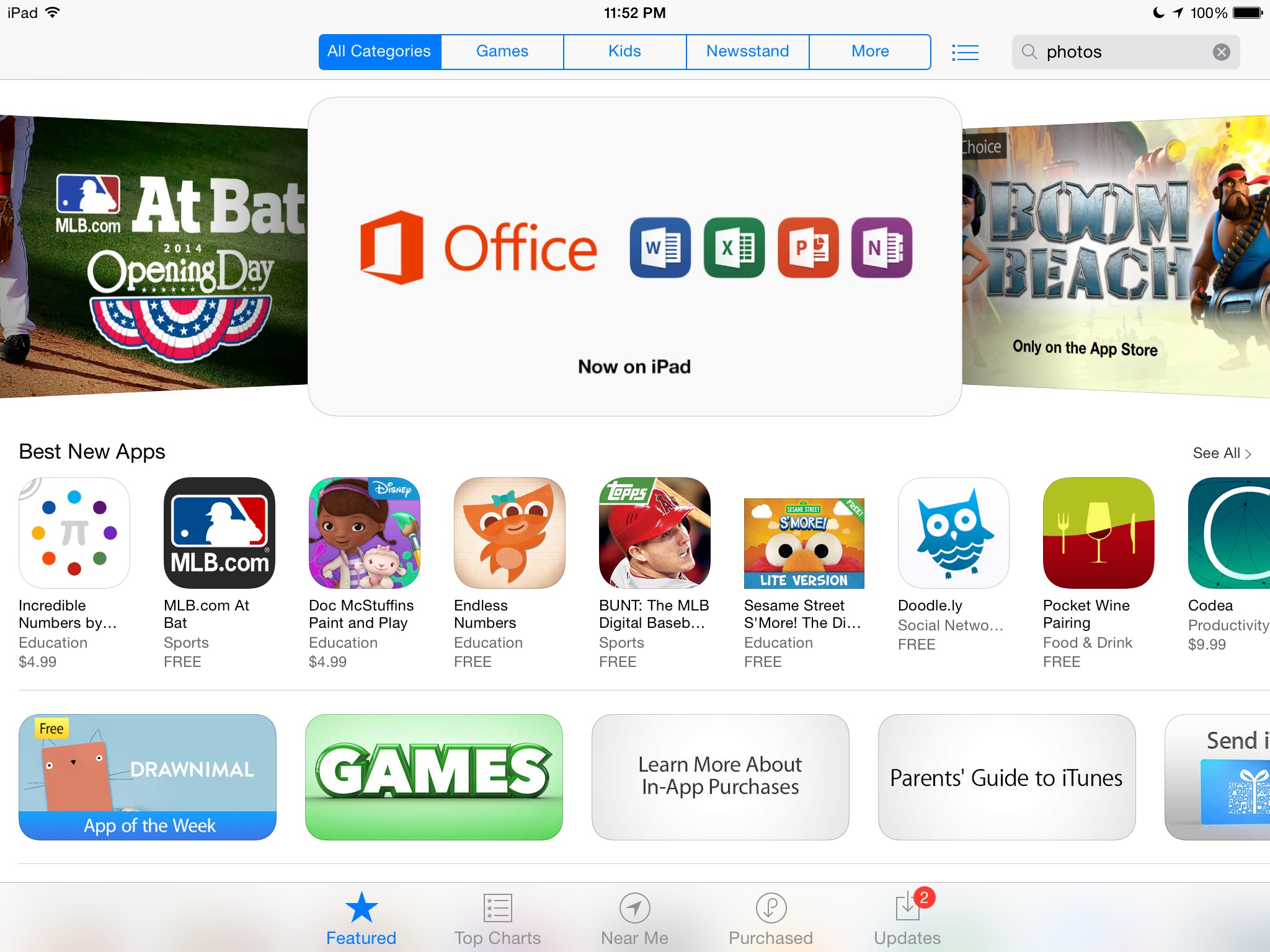 Apple is featuring Office for iPad in the App Store.

The subscription fee is $9.99-per-month, or $99.99 per year, for a Home Premium package that includes unlimited access to the Office applications for Windows, Mac and mobile. A more affordable Office 365 Personal tier costing $6.99 per month ($69.99 per year) is coming soon, though it’ll limit your Office usage to a single PC or Mac desktop, plus one tablet.

The reason it took so long to bring Office to the iPad, according to Microsoft’s boss, is their desire to do it right and tailor the app to Apple’s tablet and iOS 7, he told reporters at Microsoft’s San Francisco event on Thursday:

We’ve been obviously working on this for a while. The thing we wanted to get most right was the combination of what I would call the combination of the app, the enterprise architecture, the developer APIs, and then marry it with the device and what you expect from the device. It’s not just a trivial thing, let’s port Word for Windows to a particular device.

Welcome to the #iPad and @AppStore! @satyanadella and Office for iPad

Thanks @tim_cook, excited to bring the magic of @Office to iPad customers #cloud4mobile

History has been made, indeed.

Earlier this month, Microsoft unleashed a nice OneNote for Mac application in the Mac App Store, made Mobile Office for iPhone free for home use (no subscription required) and is slated to update Office for Mac with a plethora of much-needed new features.

This may come as a surprise to our younger audience, but those who have been around for some time will remember that the Windows giant – despite the ups and downs in the Apple-Microsoft relationship – was the key Mac developer from the onset.

The two companies were partners early on in the game: for example, Word for Mac debuted in 1985 as the first graphical version of Microsoft’s word-processing program.

So, what do you think about this revenue sharing scheme?

Is Microsoft potentially going to make Apple a lot of money by agreeing to implement in-app purchases for Office 365 subscriptions and share revenue with Apple?