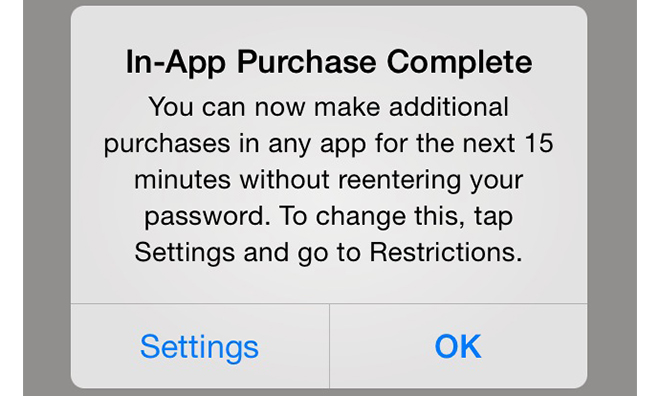 Apple released iOS 7.1 earlier this week, and among its many other changes is a new warning message for users regarding the 15-minute in-app purchase window. The window allows you to buy IAPs on an iOS device for 15 minutes after a password is entered without authorization.

The move is likely part of Apple’s efforts to make good on its settlement with the FTC regarding a lawsuit over IAPs. The company told the commission that it would issue refunds to those affected, and modify its in-app billing system to make the whole process more clear for users…

As noted by AppleInsider, the pop-up gives users a direct link to the Settings application where they can apply restrictions for in-app purchases. They can choose to leave the 15-minute buy window alone, require a password for every purchase, or turn off in-app purchasing altogether.

For its lawsuit settlement made with the FTC (Federal Trade Commission) in January, Apple agreed to refund over $30 million to those affected by ‘unauthorized purchases.’ It also agreed to make necessary changes to its App Store checkout and billing processes by the end of March.

In addition to the FTC suit, Apple has faced a handful of class-action lawsuits from parents over its IAP policies. It’s also had to issue individual refunds to parents of up to $6000. It’ll be interesting to see if the changes it’s made in iOS 7.1 will finally put an end to this expensive headache.