Parents whose kids were tricked into obtaining virtual items in iPhone and iPad games by way of the iOS In-App Purchase mechanism will get refunded over unwanted spending, according to Apple’s settlement with the U.S. Federal Trade Commission (FTC). The penalty dwarfs Google’s $22.5 million fine in the Safari website tracking scandal.

Apple CEO Tim Cook was not pleased with the outcome, but acknowledged in a letter to employees that the company “has entered into a consent decree” over long-standing complaints over inappropriate charges in the App Store, alluding his company may have exhausted its legal options and didn’t want to risk an enduring legal battle with the government…

According to a statement on the FTC’s website, kids’ in-app purchases without parental consent will cost Apple a minimum of $32.5 million. The terms of the settlement with the FTC call for Apple to change how it bills consumers to ensure that it has obtained “express, informed consent from consumers before charging them for items sold in mobile apps”.

Apple should have made it much clearer to parents that entering their Apple ID credentials for a single in-app purchase also allowed the system to approve subsequent in-app charges during a 15-minute password cut off window. 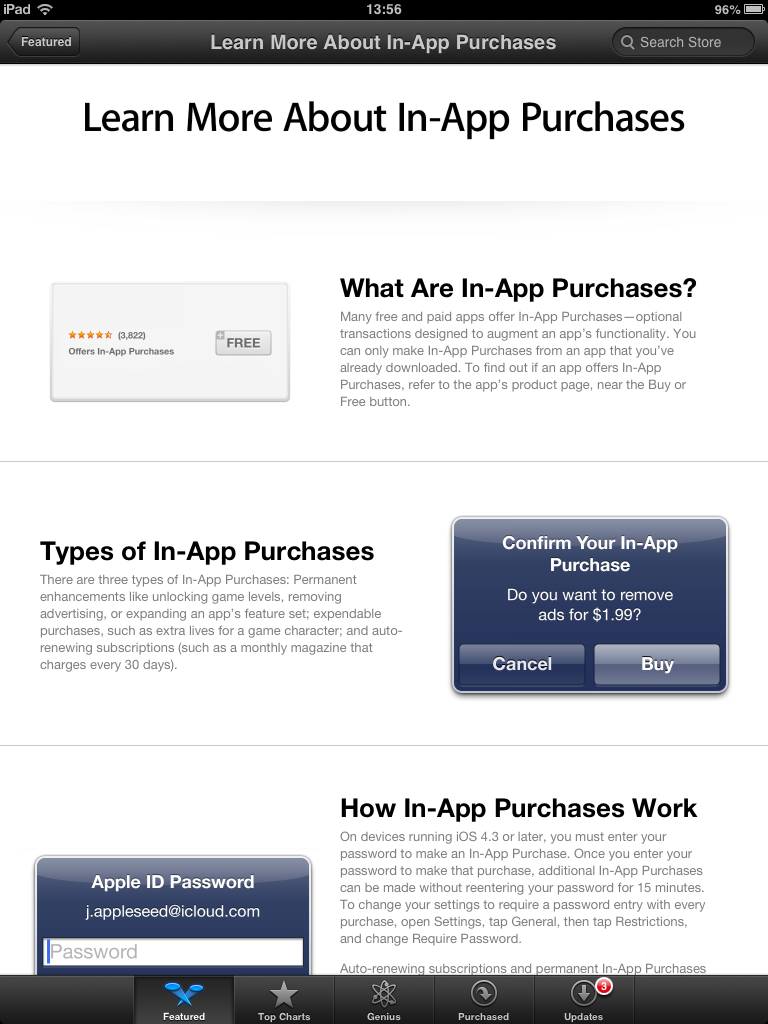 Once parents entered their password, kids would simply continue buying virtual items in games, not realizing the iTunes backend billed their parents’ credit card for each subsequent purchase made within an app.

Cook, on the other hand, thinks that “it doesn’t feel right for the FTC to sue over a case that had already been settled“. His memo to employees lists a few changes Apple had implemented to prevent unwanted charges in apps.

Those would be deploying a new iOS Restrictions switch to disable in-app purchases altogether, creating a special App Store section detailing the feature and reaching out the 28 million App Store customers who had made an in-app purchase in a game designed for kids and “reimbursing each one as promised” (with iTunes credits).

Here’s how easy it used to be to racket up a cool $100 prior to these changes.

Re/code has the full text of Cook’s memo to troops:

I want to let you know that Apple has entered into a consent decree with the U.S. Federal Trade Commission. We have been negotiating with the FTC for several months over disclosures about the in-app purchase feature of the App Store, because younger customers have sometimes been able to make purchases without their parents’ consent. I know this announcement will come as a surprise to many of you since Apple has led the industry by making the App Store a safe place for customers of all ages.

From the very beginning, protecting children has been a top priority for the App Store team and everyone at Apple. The store is thoughtfully curated, and we hold app developers to Apple’s own high standards of security, privacy, usefulness and decency, among others. The parental controls in iOS are strong, intuitive and customizable, and we’ve continued to add ways for parents to protect their children. These controls go far beyond the features of other mobile device and OS makers, most of whom don’t even review the apps they sell to children.

We heard from some customers with children that it was too easy to make in-app purchases, so we moved quickly to make improvements. We even created additional steps in the purchasing process, because these steps are so helpful to parents.

Last year, we set out to refund any in-app purchase which may have been made without a parent’s permission. We wanted to reach every customer who might have been affected, so we sent emails to 28 million App Store customers – anyone who had made an in-app purchase in a game designed for kids. When some emails bounced, we mailed the parents postcards. In all, we received 37,000 claims and we will be reimbursing each one as promised.

A federal judge agreed with our actions as a full settlement and we felt we had made things right for everyone. Then, the FTC got involved and we faced the prospect of a second lawsuit over the very same issue.

It doesn’t feel right for the FTC to sue over a case that had already been settled. To us, it smacked of double jeopardy. However, the consent decree the FTC proposed does not require us to do anything we weren’t already going to do, so we decided to accept it rather than take on a long and distracting legal fight.

The App Store is one of Apple’s most important innovations, and it’s wildly popular with our customers around the world because they know they can trust Apple. You and your coworkers have helped Apple earn that trust, which we value and respect above all else.

Apple is a company full of disruptive ideas and innovative people, who are also committed to upholding the highest moral, legal and ethical standards in everything we do. As I’ve said before, we believe technology can serve humankind’s deepest values and highest aspirations. As Apple continues to grow, there will inevitably be scrutiny and criticism along our journey. We don’t shy away from these kinds of questions, because we are confident in the integrity of our company and our coworkers.

Thank you for the hard work you do to delight our customers, and for showing them at every turn that Apple is worthy of their trust.

FTC Chairwoman Edith Ramirez called the settlement a win for consumers and a blow to Apple because “you cannot charge consumers for purchases they did not authorize”.

The FTC said in a statement it will announce the settlement later today.

The UK government is also conducting a probe into iOS in-app game purchases.