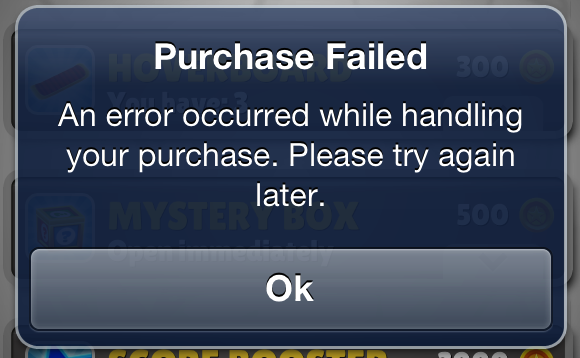 In a settlement with the FTC earlier this year regarding a lawsuit over in-app purchases, Apple told the commission that it would issue refunds to those affected and modify its in-app billing system to make things more clear. The FTC agreed and gave the company until March 31, 2014 to make the changes.

In order to meet the government’s orders, Apple must alter its billing practices to obtain a user’s express consent before billing them for an in-app purchase, and provide them with an easy way to withdraw that consent. And according to a new report, Apple engineers are scrambling to meet the deadline…

“One source I spoke to says that it’s taking Apple longer than expected to make the required changes. In order to meet the government’s second criteria (the option to withdraw their consent at any time) Apple must require a password for all IAPs by default, and perhaps make a no-password window an option via settings.

It’s not only iOS that’s affected, Apple also needs to make changes to the aging iTunes codebase as well. Since the App Store is also available in the desktop version of iTunes (currently at v11.1.5) Apple would be wise to make changes in it to avoid further FTC scrutiny. Although only apps can be purchased (not IAPs), a no-password window is also present in iTunes on the desktop.”

The site notes that while it might sound like a minor undertaking, changing the App Store to obtain a user’s express, informed consent before billing them would require significant modification to the App Store checkout process. It would also probably necessitate some changes to iTunes and possibly even iOS 7.

In fact, the consensus is that Apple is likely trying to squeeze these changes into its upcoming iOS 7.1 update, which is expected to land sometime this month. The latest report says that Apple’s app for next week’s SXSW iTunes Festival will depend on the new firmware, so theoretically we could see it any day now.

Complaints and lawsuits over in-app purchases have cost Apple quite a bit of money over the years. In addition to issuing individual refunds of up to $6000, Apple has settled two major lawsuits worth in upwards of $30 million a piece. It’ll be interesting to see how these upcoming changes will affect the business.