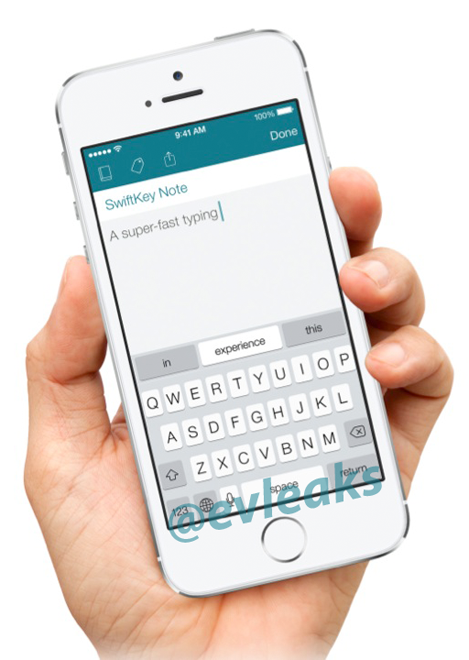 TouchType is behind the popular SwiftKey software keyboard for Android phones and the company previously went on the record expressing hope that Apple would allow third-party software keyboard development for the iPhone, iPod touch and iPad devices.

“The keyboard is the thing that needs work more than anything on that platform,” TouchType’s marketing chief Joe Braidwood said last summer.

For the record, Tim Cook did promise that his company would open iOS up more for third-party developers. While the stock iOS keyboard is still off limits, TouchType is now incorporating its popular SwiftKey keyboard technology into an upcoming new note-taking iOS app, SwiftKey Note…

Not much can be gleaned from the image apart from a row of tappable auto-correct suggestions right above what appears to be the regular stock iOS keyboard.

If the SwiftKey experience on Android is anything to go by, the custom keyboard integration in SwiftKey Note should allow for a much faster typing experience with fewer misspellings compared to Apple’s virtual keyboard.

Competition in the soft keyboard space is heating up, though all third-party input methods are limited to specific apps due to technical limitations of the platform.

For example, developer Yose Widjaja recently unveiled a Swype-style keyboard in his note-taking app Hipjot. The keyboard allows you to type and utilize swipe gestures with two hands, enabling you to complete words and sentences very quickly. 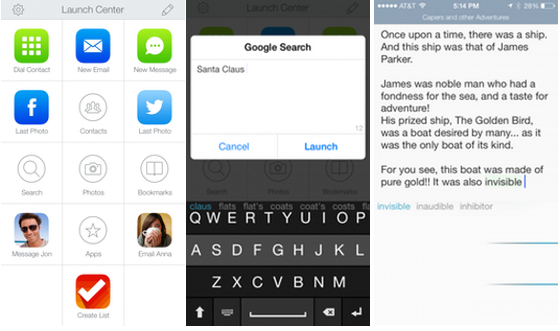 It is no secret that the stock iOS keyboard is Apple’s greatest weakness.

It’s not that the keyboard itself is bad. Quite the contrary, iOS 7 brought out a number of refinements to make the iOS keyboard’s auto-correct and predictions a lot smarter.

For example, keyboard shortcuts are now part of the iOS 7 auto-correct dictionary, there are new shortcuts in Safari with external keyboards, auto-correct can now fix misspellings in multiple words, the keyboard itself has been revamped and now includes a dark and light variant and so forth.

Still, those advances pale in comparison to the openness of the Android platform which allows users to install any number of third-party soft keyboards. It’s notable that even Apple co-founder Steve Wozniak wishes the company was “more open” and “sharing with their protocols”.

Check out an excerpt from his speech in Beijing.

Of course, jaibroken people can easily choose from a wide variety of keyboard-focused tweaks on Cydia, but that won’t mean much to the majority on factory software.

Wouldn’t you love to be able to fire up the App Store and replace the stock iOS touch-typing experience with a downloadable Swype or SwiftKey soft keyboard?