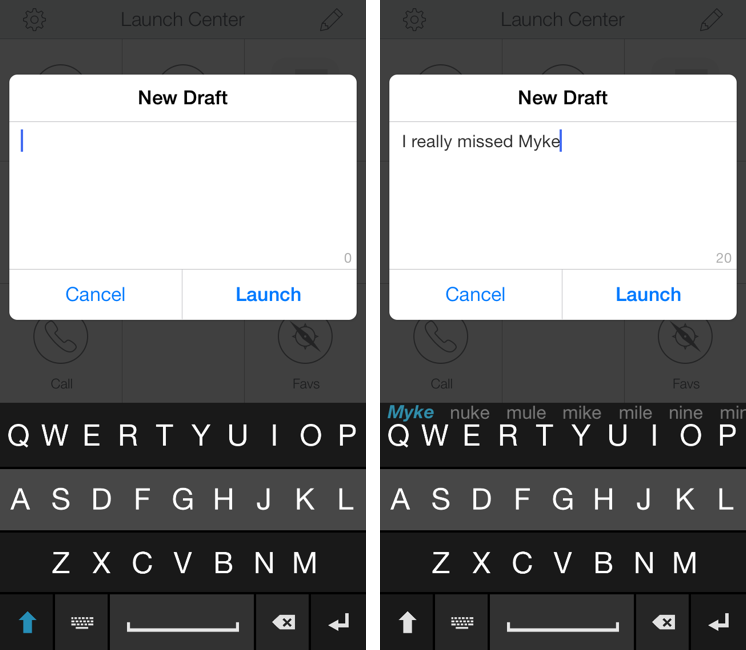 Earlier this morning, I told you about Fleksy, a free iPhone application that one-ups Apple’s stock iOS keyboard with eyes-free typing experience.

The San Francisco-based startup behind the app has decided to open up its alternate keyboard methods to select-third party developers by way of an official software development kit (SDK). This is great news as Fleksy’s keyboard sports a patent pending text prediction engine and a powerful autocorrect engine.

More on that right after the break…

In addition to supporting the new way of syncing TextExpander snippets, the biggest focus of this Launch Center Pro update is Fleksy keyboard integration.

According to Contrast Apps, Launch Center Pro 2.1 enables Fleksy for keyboard prompts in your actions. You will do this by choosing Fleksy Keyboard from the prompt menu or use the [prompt-fleksy] tag to replace the stock iOS keyboard with Fleksy.

Here are some usage examples:

Actions that use Fleksy prompts behave like traditional ones: you can give your prompt a title, automatically convert line breaks to commas via [prompt-fleksy-list] and even use real-time voice feedback with [prompt-fleksy-voice].

Fleksy keyboard is heavy on gestures.

To delete an entire word, just swipe to the left. Swipe to the right to enter a period or up/down to use other punctuation characters. Also, tap and hold while swiping to delete all text.

Perhaps I should let the video do the talking instead.

MacStories editor Federico Viticci – who is an expert and a huge fan of Launch Center Pro – was sufficiently impressed with Fleksy integration in Launch Center Pro 2.1 and deemed Fleksy’s engine superior to Apple’s.

Here’s what he wrote in his review:

Admittedly, Fleksy works well: keys are larger than Apple’s keyboard, they have better contrast than Apple’s white keyboard on iOS 7, but more importantly you can touch-type really fast as Fleksy tends to understand what you want to write and corrects it at a higher success rate than Apple’s auto-correction.

Auto-corrections aside, what’s really impressive is how the Fleksy keyboard actually works. As you type, suggested corrections appear in a thin line that runs across the top row of the QWERTY keyboard and Fleksy picks the best one for you; when it does, the mistyped word is replaced with the correction through a subtle green flash on the text.

If you don’t like the correction, you can just swipe down with your thumb and pick another suggestion or swipe up and explicitly tell Fleksy to use the (likely mistyped) word. Cycling through suggestions doesn’t remove the space that Fleksy automatically adds after a word, and the system can also be taught words it doesn’t know (keep swiping up with one finger).

The remaining new features in Launch Center Pro 2.1 include a new way to build visual actions, the ability to use lists to run actions with multiple choices via a popup, which can reduce the number of actions to launch similar tasks, new options to access iOS features such as Photos and native Share Sheets, and more.

The universal app weighs 15.8MB and requires iOS 7 or later.