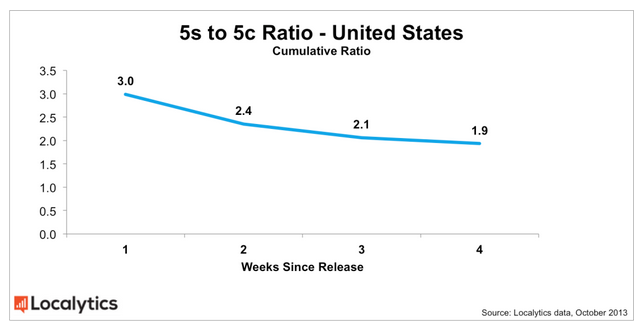 The popularity of Apple’s iPhone 5c is increasing. After a string of reports suggesting more iPhone 5s handsets were being sold, new numbers shop the sales gap shrinking. In a curious move for a smartphone first thought to attract mainly emerging markets, the iPhone 5c popularity in the U.S. is higher than overall global demand.

According to researchers at Localytics, the ration of iPhone to iPhone 5s sales is 1.9, much smaller than the 3.4 ratio reported during the first week of sales for Apple’s two new iPhones…

“Globally, however, the gap is still wider for each active iPhone 5c, there are 2.3 iPhone 5s’,” the Localytics announced Monday. The disparity shows that “the relative popularity of the iPhone 5c vs. 5s is higher in the U.S. than the broader global market.” In China, where some believed the iPhone 5c would gain traction, the more expensive iPhone 5s was purchased by an overwhelming margin. 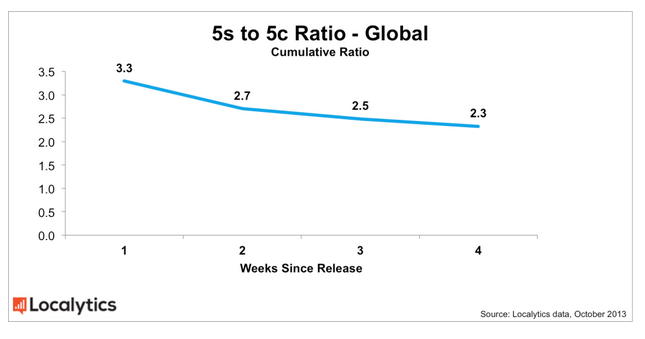 Although analytics offers no reasons for the narrowing of demand between the iPhone 5c and iPhone 5s, Apple has reportedly slashed future orders for the colorful smartphone. As well, a number of U.S. electronics chains began discounting the handset. At the same time, tales of more frequent app crashes on the iPhone 5s (due to the new A7 processor) could have swayed consumer opinion. Aside from the colorful outside, the iPhone 5c internally shares much with the iPhone 5, a more stable Apple handset.

Ahead of Apple’s new product announcements tomorrow, the analytics firm suggested the Cupertino, Calif. company needs to unveil groundbreaking technology to get people excited about upgrading their current iPad. 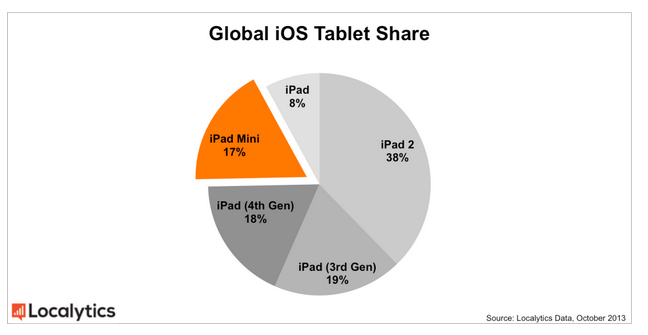 “According to our data, the current Mini has only achieved a 17 percent market share of all iOS tablets,” Localytics announced. Most interesting is that both the iPad mini and the 4th-gen iPad “combined represent only 35 percent of all active iOS tablets.” The possible reason? “The perceived differentiation of the latest-generation tablets is getting smaller with new release.” Ever more reason to think Apple could unveil a Retina-based iPad tomorrow.