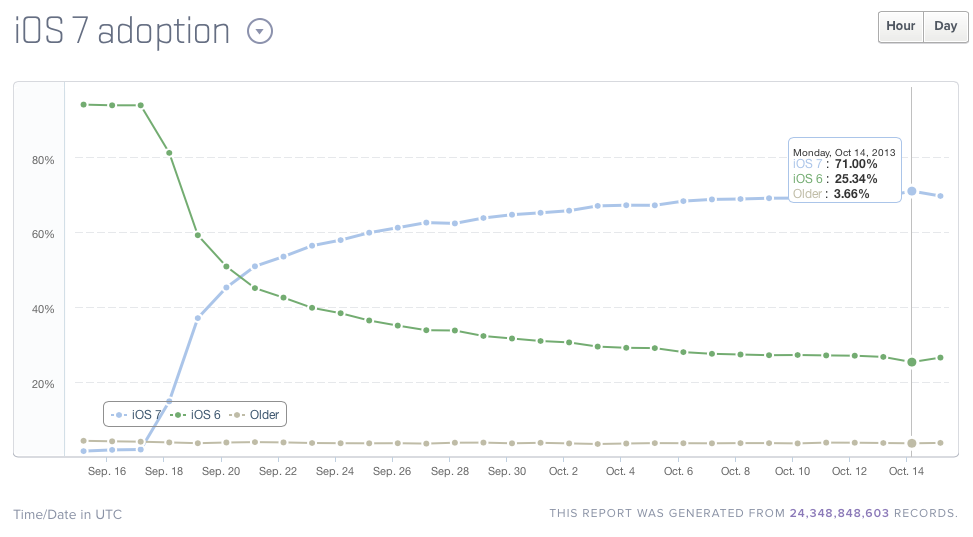 Apple’s iOS 7 continues to break records when it comes to how quickly the mobile software is being adopted. In less than a month, nearly 75 percent of iPhone, iPad and iPod touch owners have upgraded, topping the pace of iOS 6.

The new Mixpanel numbers suggest that by Monday, iOS 7 was running on 250 million of the 350 million active iDevices, according to Fortune’s Philip Elmer-DeWitt.

Today’s figures are just the latest showing the jaw-dropping speed that iOS 7 has been embraced by Apple users. The new software, which introduced both design and function changes, accounted for more than half of web traffic only a week after its release.

From the start, there’s been an outpouring of interest in iOS 7.

One the first day, a 112 percent online traffic spike was reported due to people rushing to install iOS 7. Within 16 hours a third of all iOS users had already begun using Apple’s latest mobile software.

Despite some rough spots, including problems with Messages – even complaints of the gamified and animated user interface causing motion-sickness, iOS 7’s user experience roundly defeated Android and other mobile software.

Since its release, two minor patches have been released, fixing a Lock screen vulnerability, the iPhone 5s Touch ID problems and other items.

Have you upgraded yet to iOS 7?

Some of the best jailbreak tweaks for typing on iOS 14