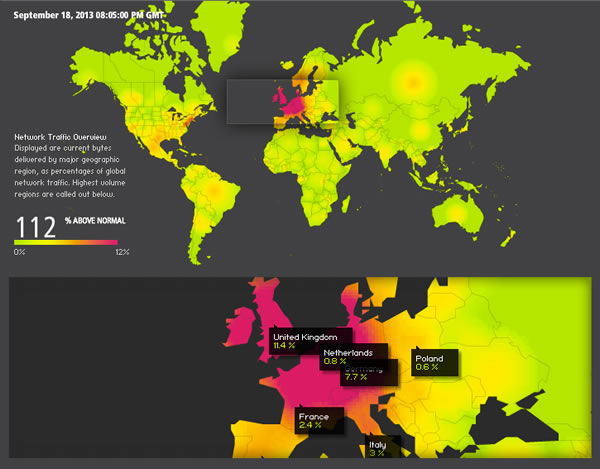 As part of its announcement of the nine million iPhone 5s/5c sales during the opening weekend, Apple also mentioned this morning that 200 million customers have upgraded to iOS 7 since its release last Wednesday. In fact, the mobile operating system has experienced such a rapid adoption that it may have been responsible for a spike of up to 112 percent in last Wednesday’s Internet traffic.

Among traffic hotspots were the US and UK, which have the highest rate of iPhone usage. Just how much traffic are we talking about? Some 2.2 terabytes of data per second spread over 6.3 million downloads per hour, according to one estimate…

According to Akamai’s own real-time monitor of the Internet (via Global Nerdy), Internet traffic was 112 percent above normal at just after 4pm last Wednesday. That’s just three hours after Apple unleashed the iOS 7 upgrade for East Coast iDevice owners.

Just 16 hours after the 1pm Wednesday release, iOS 7 was adopted by nearly a third of iDevice users.

Apple CEO Tim Cook has said the 700 millionth iOS device will roll off the assembly line next month. If about half of iOS devices purchased are still being used, “it puts the number of initial iOS 7 downloads at roughly 100 million, or 6.3 million per hour,” writes Fortune’s Philip Elmer-DeWitt.

The speed at which iDevice owners are upgrading is likely a record and one that should warm the heart of both app developers and Apple.

While the launch of the iPhone 5s and iPhone 5c happened within an environment of doubt over the 5c’s sales and the supply of the 5s, the iOS 7 launch has gone off without a hitch and overall positive media attention.

“This is our best iPhone launch yet―more than nine million new iPhones sold―a new record for first weekend sales,” CEO Tim Cook was quoted in today’s press release. Apple also said that over eleven million unique listeners have tuned in to iTunes Radio since its arrival as part of last Wednesday’s iOS 7 launch.

We can’t tell how this compares to Pandora as the popular Internet radio service doesn’t break down its active listeners by number.