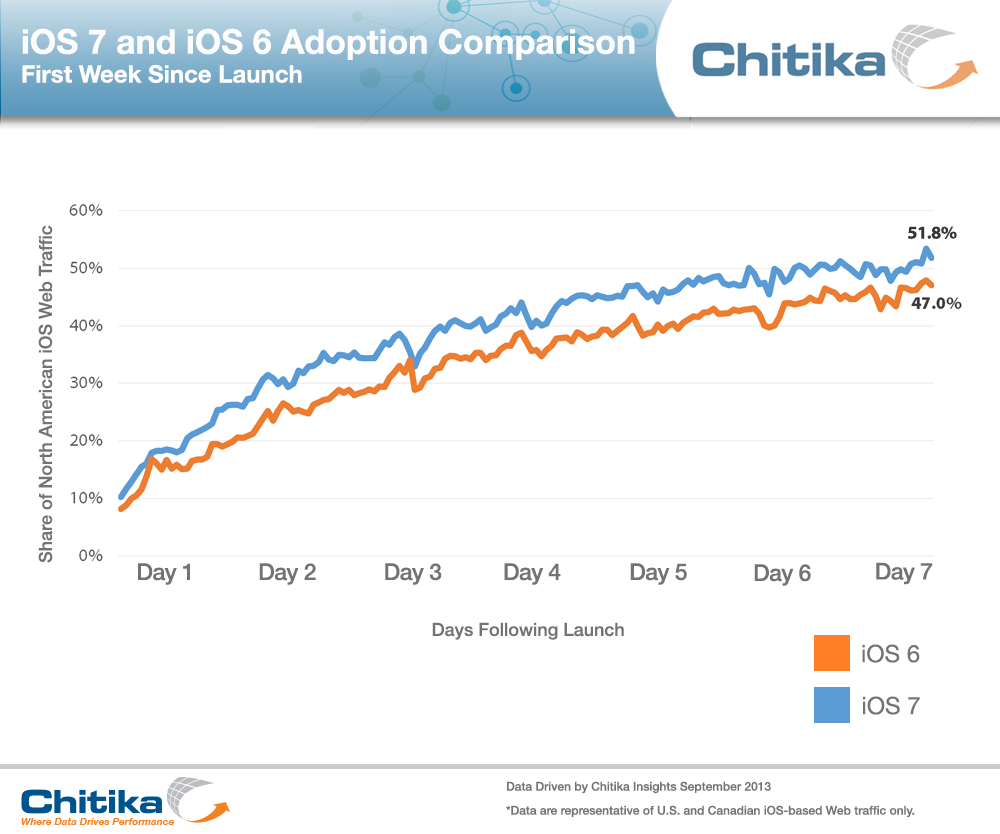 The beat goes on for Apple’s iOS 7. The latest: in just a week the new mobile operating system now represents 52 percent of all online iDevice traffic, according to one Internet measurement firm. Indeed, in just 24 hours following its September 18 release, the new software for the iPhone, iPad and some iPods accounted for just over 18 percent of Apple’s web traffic, reports ad network Chitika.

By comparison, Apple’s previous iOS 6 required three days to top thirty percent of web traffic and not until February of 2013 did it attain 83 percent of online activity. Why has iOS 7 taken the tech world by storm, just yesterday being crowned the most user friendly mobile operating system?…

While quite a few people messed with iOS 7 in its beta stages, the operating system took off like a rocket soon after being officially released. In the first 24 hours, iOS 7 accounted for 18 percent of online Apple traffic. Within 48 hours that number climbed to 32 percent of traffic, according to Chitika.

Other reports have detailed a similarly steep rise in iOS adoption.

Mixpanel, for example, found almost one-third of iOS users had upgraded to iOS 7 within the first 16 hours after release. Another study found web traffic spiked 112 percent above normal as iDevice owners rushed to update their OS.

Why the rapid adoption of an OS out just seven days? 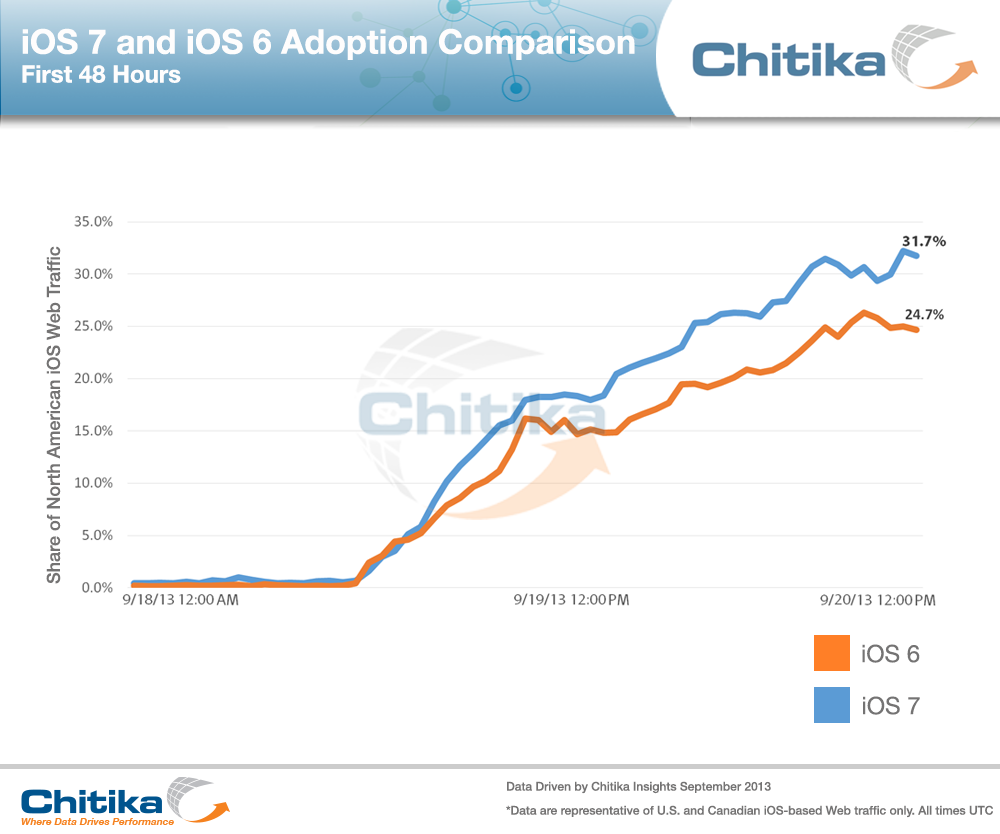 The first is purely mechanical.

Apple makes it extremely easy to update to the latest operating software. Not only has the process been refined to just a single touch, but the days of when you had to connect your iDevice to your desktop and install via iTunes is gone.

You don’t even need to plug your iPhone or iPad in the wall – everything is over the air. That explains why iOS users are six times as likely as Android owners to run the latest version of their operating system.

Another reason: Although a few features are available to just Apple’s most recent iDevices, the iOS upgrade works with older iPhones and iPads. For example, iOS 7 happily runs on my old iPhone 4 and iPad 2 without complaint. Unlike Apple’s desktop OS X software, which prevented many older computers from upgrading. 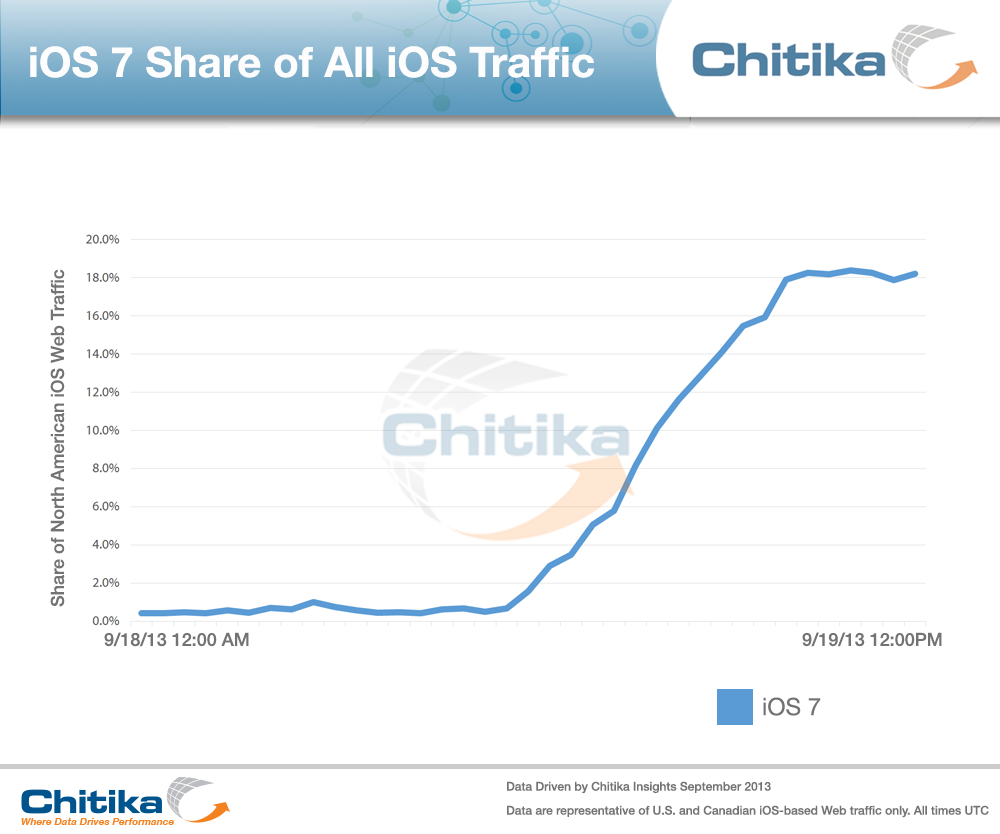 Apple also is aware that smartphone use is growing outside of North American and Western Europe. By introducing iOS 7 at the same time globally, there is a tidal wave of interest as China, India and other emerging nations take up the slack from maturing markets.

Finally, by making iOS 7 available to iPhones as old as the iPhone 4, Apple ensures its biggest-selling handsets retain life. If the company had cut the older iDevices out of the upgrade path, Apple may have pushed riders off the iDevice escalator, which hopefully leads to an iPhone 5s or iPhone 5c. In the end, it was extending the lifespan of older iDevices that is powering the rapid spread of iOS 7.