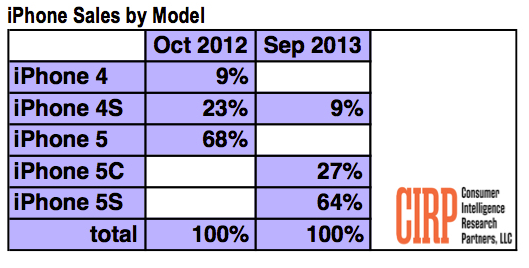 More sales estimates released today indicate the iPhone 5s continues to outsell the iPhone 5c, Apple’s other smartphone released in September. Indeed, the iPhone 5s – decked out in fingerprint sensor, new A7 processor and all – accounts for 64 percent of Apple handset sales, flying off shelves more than twice as fast as the more colorful iPhone 5c at 27 percent.

However, will that sales lead last beyond the early demand fueled by first-adopters and other Apple fanatics? Plus, can the two new iPhones perform as well as their iPhone 5 and iPhone 4s counterparts did?

The findings from Consumer Intelligence Research Partners (CIRP) should come as a comfort to Apple, since the less-expensive ‘mainstream’ iPhone 5c is not cutting into sales of the top-tier iPhone 5s, according to AllThingsD.

CIRP’s data suggests that the company ha so far avoided it – though that’s hardly surprising at this early stage. After all, the iPhone 5c was intended as a mainstream smartphone, the iPhone 5s as an enthusiast one – a ‘forward-thinking’ device for forward-thinking folks. And enthusiasts are often early adopters.

How will the two Apple smartphones do once the heat of first sales cools off?

The iPhone 4s could be a good barometer. The iPhone 4S – eclipsed by the newer iPhone 5 – had 23 percent of sales back in October of 2012. By comparison, when launched last month, the plastic iPhone 5c performed only slightly better – 27 percent.

We’re likely to see the iPhone 5c account for a larger portion of sales over time.

Over time, the lower-priced phones have tended to gain share versus the flagship phone, after the initial rush of dedicated upgraders to the newest device. So we expect that the 5c will account for a higher percent of total US iPhone sales in the coming months.

Although it would be intriguing to hear some official sales numbers from Apple, when it announces fourth-quarter figures on October 28, we’re likely only to get an aggregate picture because Apple never broke down iPhone/iPod/iPad sales by model. Just after the first weekend of sales, Apple said it had sold nine million new iPhones.

Both new iPhones are slated to hit an additional 50+ new markets by November 1, according to the company. People in the market for a new iPhone 5s, especially the elusive gold model, are out of luck as the online Apple Store was recently updated with a new shipping estimate of 2-3 weeks.

Jeff and Christian reported about a pair of web apps (here and here) that help determine iPhone 5s availability across Apple and carrier’s online stores across the world.