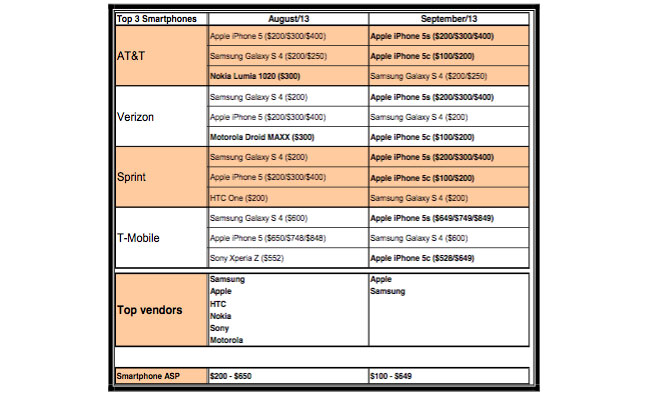 Apple’s new iPhone 5s became the top-selling smartphone in the US during September. New numbers show the 5s and 5c were among the top three smartphones sold by all four major domestic carriers.

Helped along by record sales, the iPhone 5s also replaced Samsung’s Galaxy S4 as the best-selling smartphone among AT&T, Verizon, Sprint and T-Mobile, according to Canaccord Genuity Friday…

The investment bank (via AppleInsider) cited “very strong initial sales and back orders for the iPhone 5s and strong iPhone 5c sales” in the US and internationally. Apple announced last month selling 9 million iPhones during the first weekend of availability. Today’s figures echo earlier reports that the iPhone 5s was in high demand.

Despite the drubbing Samsung took at the hands of Apple’s two new phones, Canaccord expects the Note 3 to “compete very well” with the new handsets. Samsung has been criticized for cheating on benchmarks which showed its device performing favorably. Apple has described the benchmarks as “shenanigans.”

In just the latest signal that the smartphone market is dominated by just two companies – Apple and Samsung – the report described “very weak” interest in the HTC One. HTC, along with BlackBerry and Motorola gave up market share in sales of high-tier smartphones, which are the bread and butter for Apple and Samsung.