According to a report released Monday, the carrier began in April attracting owners of feature phones upgrading to smartphones. Now, however, 56 percent of consumers buying an iPhone from T-Mobile are coming from another smartphone. Indeed, more than 38 percent of T-Mobile’s smartphone purchasers previously owned Android handsets…

T-Mobile grew to 13.2 percent of smartphone sales in the U.S. market in the three-month period ending August 2013, marking its highest share of sales over the past year, and realized a growth of 1.1 percentage points, reversing an on-going trend of year-on-year decline.

T-Mobile’s growth is also due to it offering no-contract deals under its Uncarrier initiative, added Kantar. When the iPhone launched at T-Mobile, the carrier reported “gangbusters” initial sales.

The iPhone 5 was T-Mobile’s top-selling smartphone, attracting 17.1 percent of sales during the August quarter, Kantar announced. The research firm also found the iPhone had 39.3 percent of U.S. smartphone sales for the three months ending in August.

The company suggests the market share will likely increase due to the recent release of the iPhone 5s and iPhone 5c. 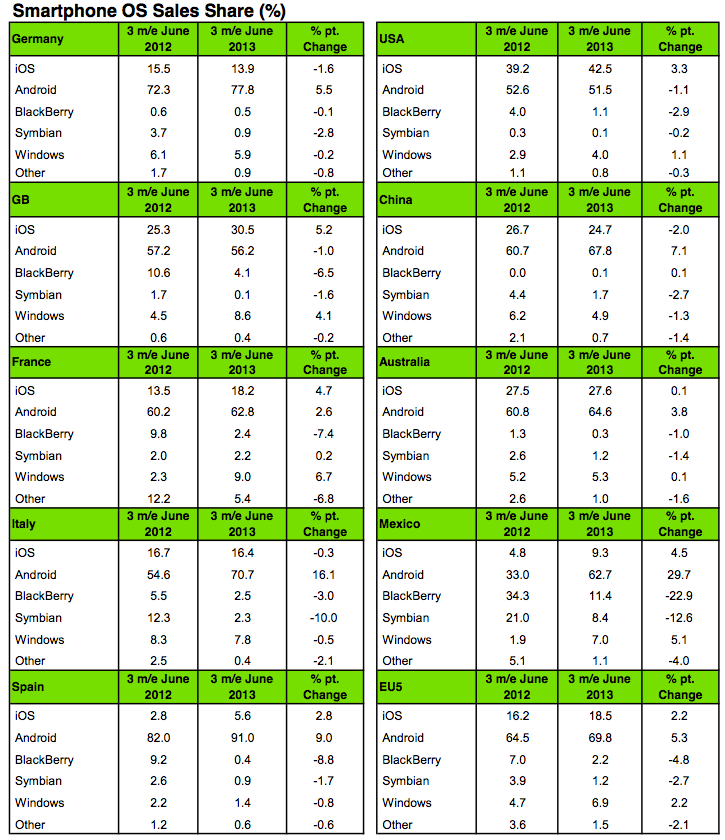 In a related report, Apple holds a slight lead over Android in Japan.

The iPhone has 48.6 percent of sales there while Android maintains a 47.7 percent market share. The recent announcement that Japan’s largest carrier NTT DoCoMo will begin selling the iPhone should boost Apple’s lead even more, according to Kantar.