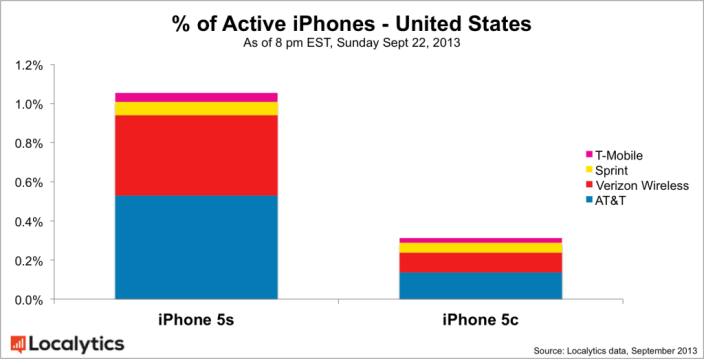 We’ve already heard field reports suggesting the iPhone 5s was outselling the colorful iPhone 5c. Now comes hard after the first weekend of sales for Apple’s two new iPhones. The new flagship 5s smartphone is more than three times as popular as the less expensive 5c, according to one analytics firm Monday.

While both of the handsets represent 1.36 of all activated iPhones in the US, the lion’s share goes to the iPhone 5s, with 1.05 percent of all Apple smartphones activated by the country’s top four wireless carriers. By contrast, the iPhone 5c is far behind in adoption, representing just 0.31 percent of activated US iPhones…

The numbers from Localytics – spanning the September 20 launch until 8 pm Sunday – indicate AT&T, Apple’s original iPhone carrier partner, activating most of the new iPhones, with Verizon, Sprint and T-Mobile behind. This is despite little to no advertising, as all of Apple’s TV ads are focused on the colorful iPhone 5c handset. 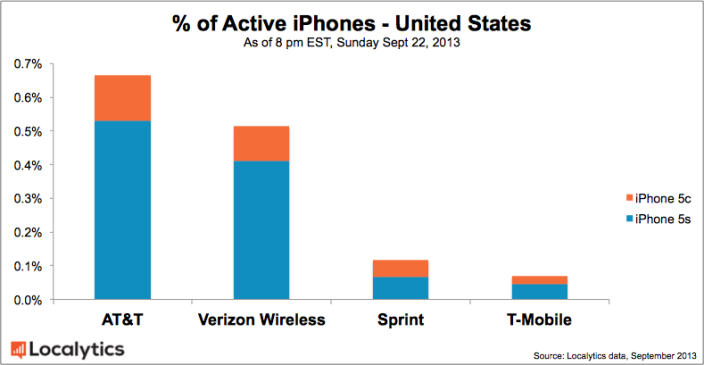 On Friday, analysts conducting spot checks on sales of the new iPhones reported up to 95 percent of new iPhones being purchased were the flagship iPhone 5s. While this could have been due to Apple’s decision to not offer pre-sales for the 5s, today’s data of carrier activation suggest the iPhone 5s simply was more popular with earlier buyers.

Then again, the iPhone 5s and 5c – which Apple said this morning moved nine million units during the opening weekend – are aimed at different groups of consumers.

The more powerful and a $100 pricier iPhone 5s is more suited to those buyers who want the latest technology – and be able to flaunt having it first: hence the long initial lines full of people looking for the 5s. 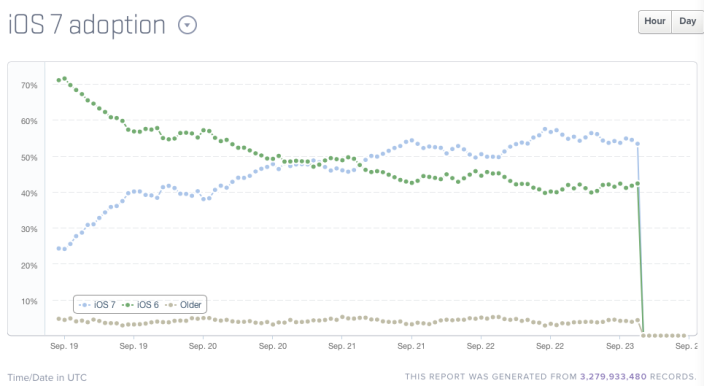 The iPhone 5c, on the other hand, has more mass-market appeal, attracting consumers who can wait until the crowds thin outs before buying the new handset. The 5c, despite its multi-colored wrapper, has the guts of the iPhone 5, allowing the year-old smartphone to live on.

It is this handset we’ll see be used as a marketing tool for China Mobile and other players in emerging markets. Another interesting metric coming from the weekend is the rapid rise of iOS 7 as the most-adopted version of Apple’s mobile OS.

The figure, from Mixpanel, shows iOS 7 hovering at around 50 percent with iOS 6 around 40 percent. That graph followed one showing iOS 7 adoption near a third just one day after the revamped OS was released.

Another data point: According to Akamai’s own real-time monitor of the web, the Internet traffic was 112 percent above normal just three hours after Apple unleashed iOS 7 last Wednesday.

For what it’s worth, Apple said already 200 million people upgraded to iOS 7 and expects to sell its 700 millionth iOS device next month.

The figures are quite a turn-around from the heavy criticism over the new flat design which replaced Steve Jobs-approved skeuomorphism.

Finally, in a sign just how important the iPhone 5s and iPhone 5c are to Apple’s bottom line, TechCrunch points out that the fourth-gen iPad and iPad mini accounted for just four percent of all iPad traffic a month after they were introduced.

In just three days, the new iPhone’s represent more than one percent of all iPhone traffic.