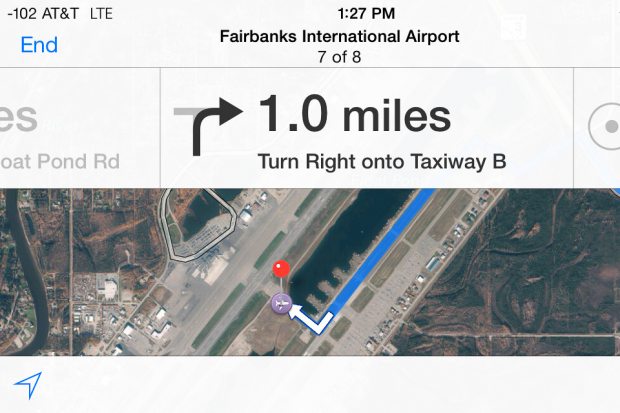 Just when you thought the dust has settled over Apple’s digital personal assistant, Siri, and the company’s Google Maps replacement software in iOS, latest reports once again pan the two services over gross inaccuracies.

Worse, these stories paint Apple Maps and Siri in a not-so-favorable light – and very publicly, too.

The first report comes from Alaska and warns about people looking for directions to the Fairbanks International Airport, only to be instructed to drive onto an airport taxiway, which is located directly across the runway where airplanes take off and land….

Twice in the past three weeks drivers from outside Fairbanks who relied on the iPhones built-in map app to get to the airport have driven onto Taxiway Bravo and proceeded to drive across the main runway. No one has been injured and Apple promises a fix by Wednesday.

The airport’s chief of operations, Melissa Osborn, warned Apple Maps instructed people to drive straight onto the airport taxiway. “These folks drove past several signs,” she said. “They even drove past a gate. None of that cued them that they did something inappropriate”.

Just out of curiosity, how come these folks did not notice they were being directed to the taxiway? I mean, it’s obviously not something one’d easily fail to grasp.

After airport personnel, police and the TSA converged on the driver of a rental car during the Sept. 6 daylight runway crossing, the airport staff complained through the attorney general’s office to Apple.

The airport has since closed the aircraft access route to Taxiway Bravo from the Float Pond Road. Even though Apple did promise a prompt fix by Wednesday, it was nowhere to be seen at press time, as per reports form the Apple legal department to the attorney general’s office and Department of Transportation and Public Facilities.

I’m not sure why exactly it’s taking Apple that long to respond.

At the very least, Apple should have temporarily disabled those specific directions until the Maps team is able to correct such a downright dangerous error. If anything, Apple’s numerous job posts for Ground Truth specialists indicates the company’s willingness to put more experts on the Maps team to deal with these inaccuracies.

Keep in mind that Apple partners with dozes of local data providers so correcting a specific error involves paperwork and is not a simple matter of flipping a few switches.

Meanwhile, Siri continues to experience issues of its own.

Conan O’Brien had actress Jane Lynch on his show yesterday night, who didn’t mince words describing her first world problem with Siri. Specifically, she said Siri told her “I have no listing for Let Pam Cookie Ian” when asked for directions to Le Pain Quotidien.

Lynch and O’Brien then did some live Siri tests that didn’t go down well.

We’ve all been there and it’s no secret Siri isn’t perfect.

But when your personal digital assistant gets ridiculed on mainstream late-night shows whose audiences count tens of millions of people, bad press is unavoidable.

In Siri’s defense, O’Brien didn’t do her justice by allowing Lynch to converse with Siri using his own phone. As you know, Siri adapts herself to the user’s unique voice signature and pronunciation, getting better over time.

Siri understands its owner best so voices new to her tend to yield poorer results. Regardless, Apple should be credit for improving Siri in iOS 7 in a number of ways. 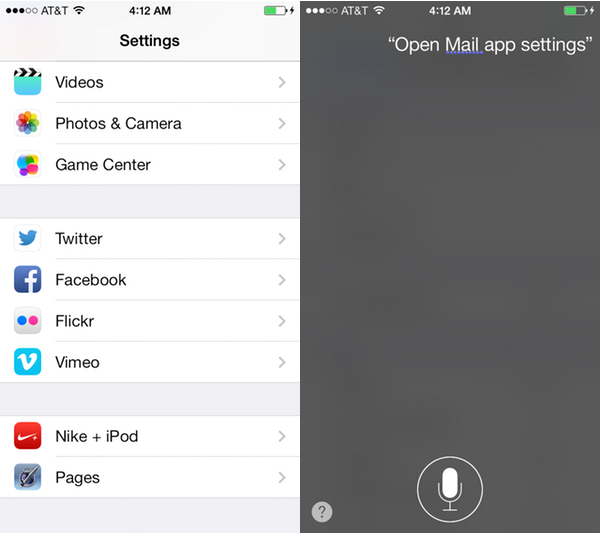 For instance, she can now search the web, images and Wikipedia inline, has higher-quality male and female voices, can change your phone and app’s settings and responds faster, thanks to backend improvements.

Also helping Siri is Apple’s use of Multipath TCP networking in iOS 7 which helps the digital assistant automatically switch between Wi-Fi or cellular connection on the fly, depending on network conditions.

By the way, here’s Team CoCo’s take on the iPhone 5s and its fingerprint scanner.

I’m torn because I love the new iPhone5S’s fingerprint scanner, but I also want to get away with some murders.

Signing off, it’s worth mentioning we heard rumors of Apple potentially supplanting Siri’s Nuance speech recognition with an in-house technology of its own. And to help fine-tune the regional differences in language, Apple has filed for a patent on integrating geolocation with Siri’s speech recognition.

Just out of curiosity, do you use Siri much these days?