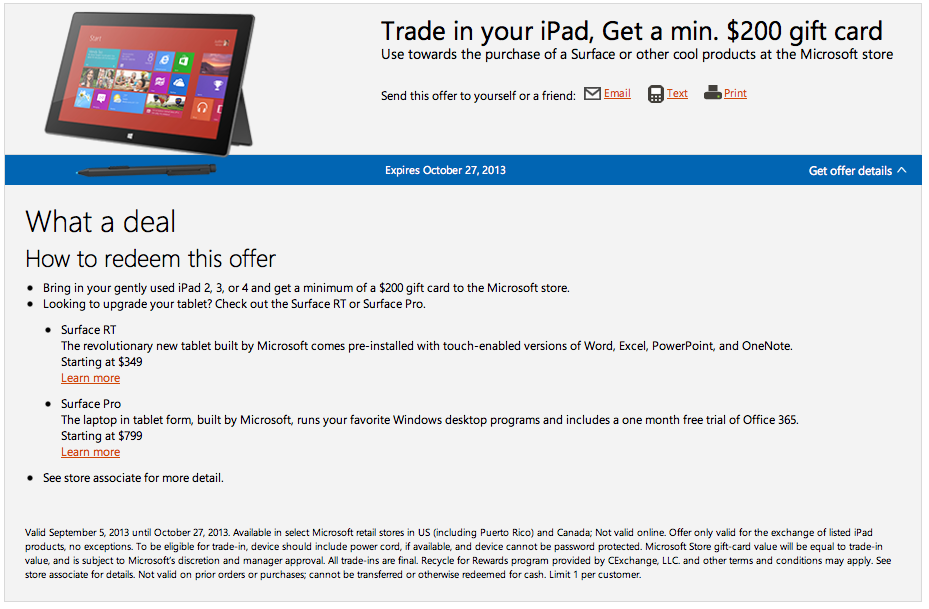 In another attempt to chip away market share from Apple’s iPad, Microsoft is now running an iPad trade-in offer. Yup, you read that right. As in, trade in your iPad and increase productivity. The software maker is tempting switchers to bring in their iPad for a $200 credit, redeemable against the purchase of a Surface “or other cool products at the Microsoft Store”.

Only the “gently used” iPad 2, iPad 3 and iPad 4 are eligible. Jump past the fold for the full breakdown…

Microsoft has been promoting the iPad trade-in in an email campaign like crazy.

The offer is not available online so you’re required to visit one of Microsoft retail stores in the United States US (including Puerto Rico) and Canada.

Upon closer inspection of your iPad, a store employee will determine the trade-in value and put the credits on a Microsoft Store gift card. All trade-ins are final and subject to Microsoft’s discretion and manager approval.

The campaign is actually part of the company’s Recycle for Rewards program provided by CExchange so other terms and conditions may apply.

“To be eligible for trade-in, device should include power cord, if available, and device cannot be password protected,” Microsoft says. 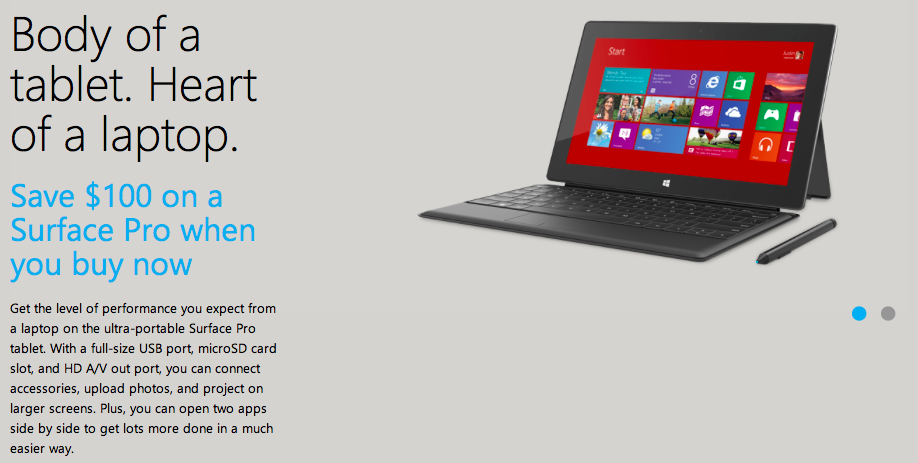 The deal is limited to one device per customer and expires on October 27, 2013.

The ‘get-rid-of-your-iPad’ program is part of Microsoft’s broader efforts to derail the iPad as training wheels of sorts for the Surface. The problem is, no one is taking the Microsoft tablet seriously even though it has some solid features and smooth OS.

An example of Microsoft’s relentlessness: the company is poking fun of the iPad in ads even after it was discovered it wrote off $900 million of unsold Surface inventory.

Back in July, it was estimated the firm moved less than two million units since launch. Soon after, Redmond permanently cut the Surface prices by $100. Last week, Microsoft confirmed it would unveil a second-generation Surface and Surface Pro at a New York City media event on September 23.

We’re expecting new iPads in October so perhaps Microsoft should have extended the trade-in offer until year’s end. In the meantime, Apple during Tuesday’s keynote announced that all paid iLife/iWork apps for iOS devices will be now offered as free downloads to users as part of the iOS 7 setup procedure – enough to give Microsoft something to think about.

So, who’s trading in their iPad for a Surface?