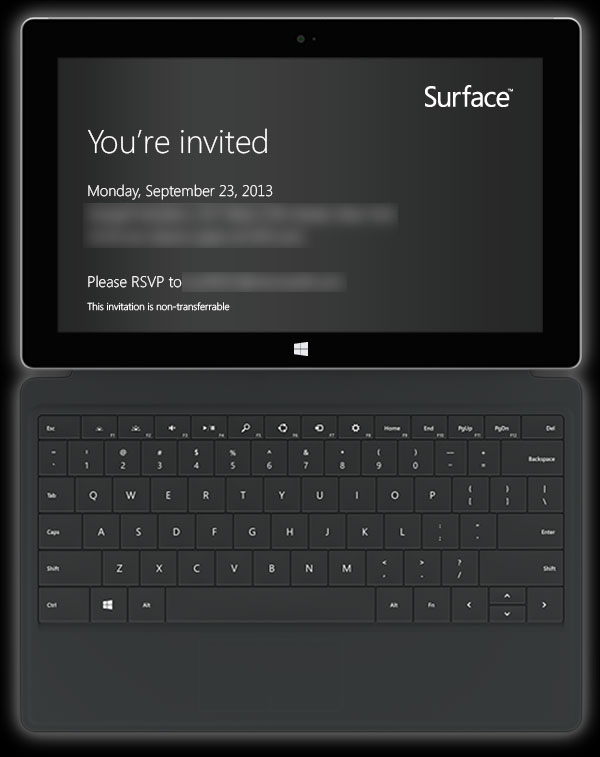 Taking another crack at tablets, Windows giant Microsoft on Monday sent out invites asking select members of the press to attend its media event on Monday, September 23, in New York City. Unfazed by slow sales of its own Surface RT and Surface Pro tablet lineup after taking the $900 million charge over unsold inventory, the company is adamant to launch a second-generation Surface tablet, the Surface 2.

The high-profile press conference will take place in New York City’s Chelsea, where Microsoft is expected to formally announce the Surface 2 and Surface Pro 2 tablets as refreshed versions of its existing Surface RT and Surface Pro models…

We’re expecting new iPads in October rather than tomorrow so Steve Ballmer & Co. are clever to counter Apple’s announcement. Sources have confirmed to The Verge that Microsoft will not be launching a rumored Surface mini on September 23.

Rumors are pointing to a Haswell upgrade for the new Surface tablets, 8GB of onboard RAM and a design similar to the current lineup, with the addition of a two-stage kickstand.

“We’re told Haswell will add just over two hours of usage to the Surface Pro 2,” The Verge writes. Other rumored specs of the second-generation Surface Pro 2 should include Nvidia’s Tegra 4 chip, a full HD 1080p screen, eight-hour battery life and black and white options, according to a recent report from WinSuperSite.

Another thing we heard through the cracks: there will be a new Power Cover accessory for both the Surface 2 and Surface Pro 2. The accessory is said to improve battery life through a built-in battery in the keyboard cover.

The Surface 2 should run Windows RT 8.1 and drop the “RT” from its name. The September 23 could also serve as a launchpad for a new Docking Station accessory, The Verge notes.

“We built a few more devices than we could sell,” he said at a recent meeting with investors. “We’re not selling as many Windows devices as we want to,” Ballmer said expressing his dissatisfaction with slow sales of third-party Windows 8 tablets.

The company recently cut prices permanently across the lineup in the hope of boosting sales. As of July 2012, Microsoft was believed to have sold only 1.7 million Surface tablets since launch.

So, what do you say?

Can this rumored specs upgrade boost the appeal of Microsoft-built tablets?