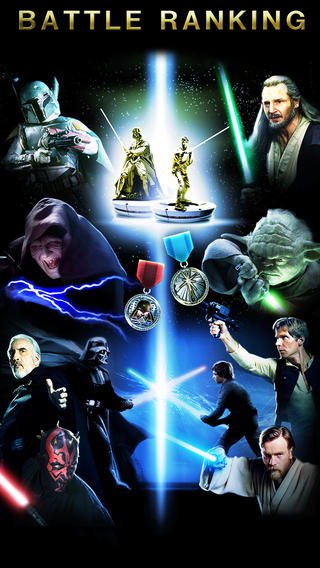 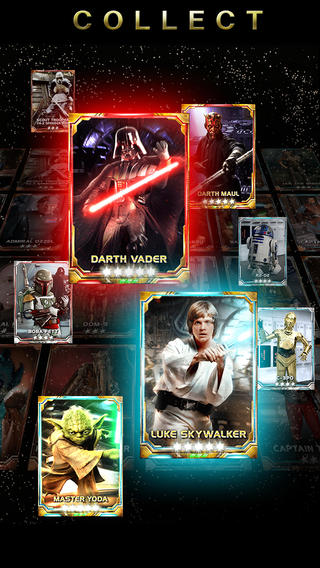 If none of the above is your cup of tea, then how about some Star Wars? Right on cue, publisher Konami today released Star Wars: Force Collection, the first Star Wars digital card battle game. If you’re into the genre, Force Collection should keep you occupied with 230 character cards that include Episodes I-VI’s famous heroes, villains and vehicles such as X-Wings, AT-ATs and Tie Fighters…

“Your actions determine the path to joining the light or dark side of the Force,” so be careful how you go about collecting and strategizing with your card deck.

Build a team of formidable heroes and use treasured blueprints to create squads of starfighters as you fight for control of the galaxy!

Create the ultimate formation and challenge your rivals in highly strategic battles. Gain fame and climb the ranks in the Jedi Order.

Just be careful in choosing your enemies and opponents. The Dark Side of the Force is strong…

You’ll need to piece together blueprints (you can also loot blueprints by defeating other players) in order to construct some of the movie series’ most famous vehicles and starfighters. As is the norm for card-based games, there’s the usual assortment of quests to keep you occupied, bosses to defeat and much more.

・Collect powerful cards of your favorite heroes and vehicles from Episodes I through VI.
・Evolve and enhance your cards to become invincible!
・Each character card and vehicle card has unique attack powers and ranges.
・Interact with other players and ally with them to defeat fierce enemies.
・Make ally requests and claim premium rewards.
・Compete in exciting events held on exotic planets with other players across the galaxy.

Yes, the game is available on a free-to-play basis. 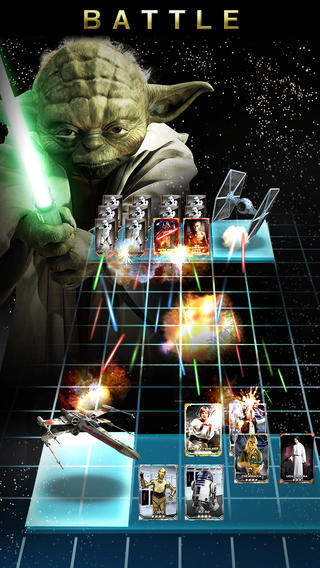 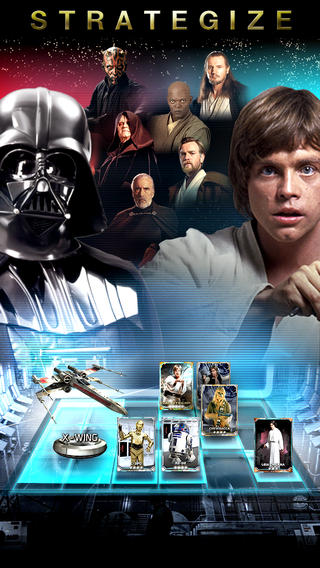 That doesn’t mean you won’t be able to play if you don’t spend cash on upgrades as all available in-app purchases include sets of crystals priced anywhere from $2.99 (1,000 crystals + 100 free crystals) and all the way up to $99.99, which buys you a whopping 10,000 crystals with an additional 1,000 free ones.

If you’re on Android, head over to Google’s Play store instead.