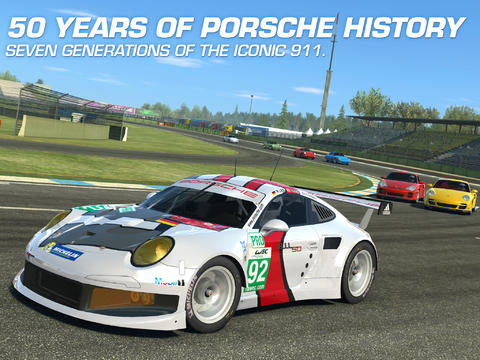 Keeping true to its promise, the most prolific iOS games publisher Electronic Arts has released another major content update to its free-to-play Real Racing 3. Celebrating the fiftieth anniversary of one of motorsport’s most legendary vehicles, Real Racing 3 ‘Porsche 911’ update expands your garage with the addition of the seven generations of the legendary Porsche 911. More tidbits and a few nice clips can be found right below…

Those unwilling to spend cash for faster car upgrades should love a brand new option called VIP Delivery which enables new options for instant car deliveries and upgrades “to help you get on the track faster”.

And here’s the producer video.

This release also includes iOS 7 compatibility and bug fixes, in time for Apple’s big reveal next Tuesday. Like with previous Real Racing 3 updates, you’re expected to first unlock some vehicles before being able to race with all of the new Porsche cars.

You must have at least 1.2GB of free space on your device to install the game. There’s also an Android edition available – here, check out the promotional trailer below for the Google Play edition of the ‘Porsche 911’ update.

You can download free-to-play Real Racing 3 for Android from Google’s Play store.