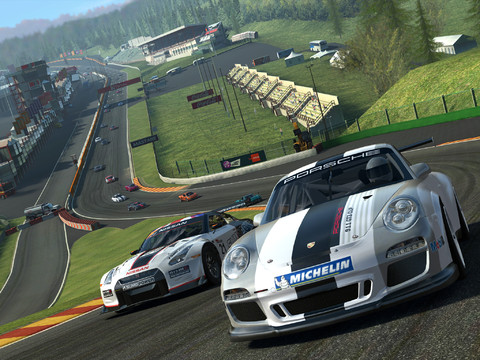 Electronic Arts is set to give its free-to-play iOS/Android racer, Real Racing 3, another notable content update. The forthcoming Porsche 911 update is now on the horizon and challenges you to expand your lineup of cars with seven generations of the Porsche 911.

By the way, the car maker is celebrating the fiftieth anniversary of the legendary 911. The Porsche update is being teased less than three weeks after the most recent content pack enabled a bunch of classic American muscle cars (the Mercedes-Benz and Bentley vehicles came via July’s update)…

The blurb has it:

Celebrate 50 years of one of motorsport’s most legendary vehicles! Real Racing 3’s garage expands with the addition of seven generations of the Porsche 911. The Porsche Update is coming soon to Real Racing 3!

My only hope is that Electronic Arts balances out those in-app purchases as there’s definitely too little prize money to be won – and this is by design so players would spend cash on upgrades sold in-app for real money.

Another problem I have with Real Racing 3: in order to play with the newly added cars, you must first unlock dozens of vehicles, which takes forever – unless you pay up!

I’d also appreciate Ferarris and Jaguars and some landmark tracks (Monaco, Nürburgring, Road America and Sebring come to mind), in addition to weather effects such as rain and snow, car lights and the real-time multiplayer.