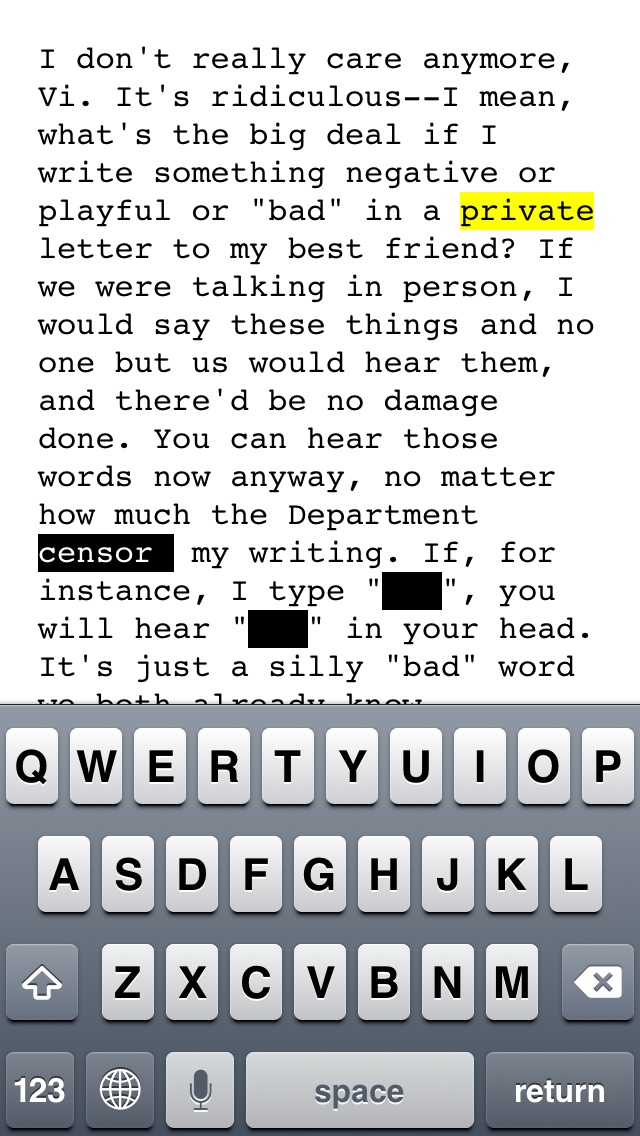 You type, “Get ye flask.” The game responds, “You cannot get ye flask.” Sound familiar? Then you know a little something about old school text-based adventures. It was always so difficult to figure out the correct way to type an action.

Blackbar is a text-based story that requires a similar activity. Only, instead of trying to command the character to perform an action, you must find the correct word to fill in the blank…

There isn’t much to say about the design of this game because there really isn’t one. As soon as you open the app, the story begins. There isn’t even a title page. The screen is white and the letters are black. When you correctly type in a word, it is highlighted in yellow. Some blank spots are black and some are white. There are some pages with no puzzles at all.

You won’t be able to start over or play multiple games at once. There are no hints to help you get to the next page (although there is a walkthrough milling about on the Internet somewhere). This game is simplicity at its finest and epitomizes the graphics-free text based games from decades ago. 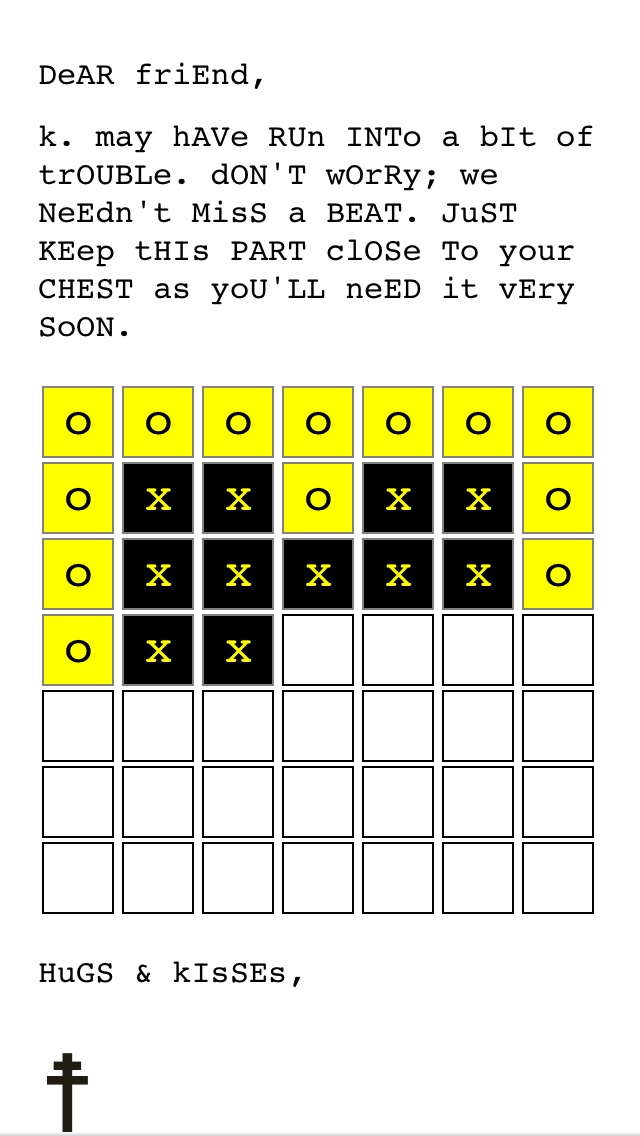 The premise of the story involves letters being sent to “Vi Channi” from her childhood best friend “Kentery Jo ‘Kenty’ Loaz.” Kenty has just joined the Department of Communication and will soon find out that censorship is not such a great way to make a living.

From the very first letter sent to Vi from Kenty, you’ll see hints that words are being redacted by the Department, who filters every letter sent to and from the facility. You are playing the role of Vi who is receiving censored letters from your friend. After a while, you will see Kenty become more and more frustrated with her situation as she begins to break down (and cuss a lot). At the same time, you will be receiving official notices from the Department of Communication regarding your own inappropriate letters. There is also a third party that is very interested in Kenty. With an air of mystery, the unknown sender offers clues to help you uncover the secrets that lie within the walls of the Department.

When you have correctly entered all censored words on a page, you’ll be able to continue to the next. Until then, you can only flip back to previous pages. Sometimes, turning back a page or two will help you uncover hints as to what word you are supposed to be spelling out.

As the story unfolds, the missing words become more difficult to figure out. There is a quote inspired by Shakespeare’s Richard III, an answer to the riddle, “Why is a raven like a writing desk?” and a picture that must be drawn using only two letters. Before you make it to the end of the story, you’ll be filling in the blanks for an entire note with no hints to guide you. 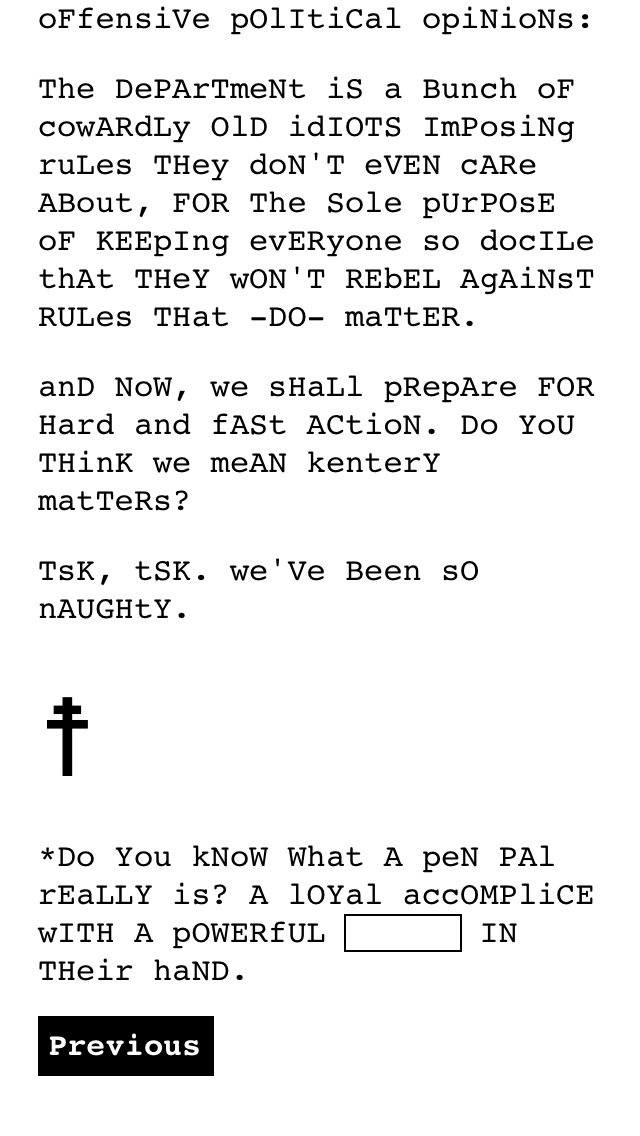 Although the basic idea is as old as text-based adventure games for the Commodore 64, this game is quite unique. There isn’t much to it, but the story is interesting enough to keep you involved and working toward the final page. You won’t get bored with this story.

Some of the words are nearly impossible to figure out. After spending 10 minutes trying to figure out a particular sentence, I actually searched for the answer on the Internet. I’d rather have been given a hint instead. Maybe hints could come in the form of single letters in each word.

Blackbar costs $2.99. If it weren’t for the fact that the game is so interesting and novel, I’d say it is too expensive. The story is less than 50 pages long and there is no replay value. Although three dollars seems like a lot for an iOS game, it is important to keep in mind that two guys who don’t have the financial backing of big game companies created it. If this game sounds interesting to you, invest the money knowing that it goes to independent game developers who need to pay the rent, too.

This game is interesting and distinctive. It is set in an Orwellian dystopia that makes you think twice about the emails you send to your friends. If the story interests you, the game will impress you. At the premium price, I’d recommend caution with purchasing. It is worth the money, but mainly for those intellectual types who like exercising their brains. This game is available for the iPhone, iPad and iPod touch. Download it in the App Store today.

Frankly, I can’t think of any game that is like Blackbar. However, there are a variety of text-based and choose-your-own adventure games in the App Store, like Sorcery and The Fighting Fantasy line by Tin Man Games.